PGA updates | Leaders tee off in final round of PGA 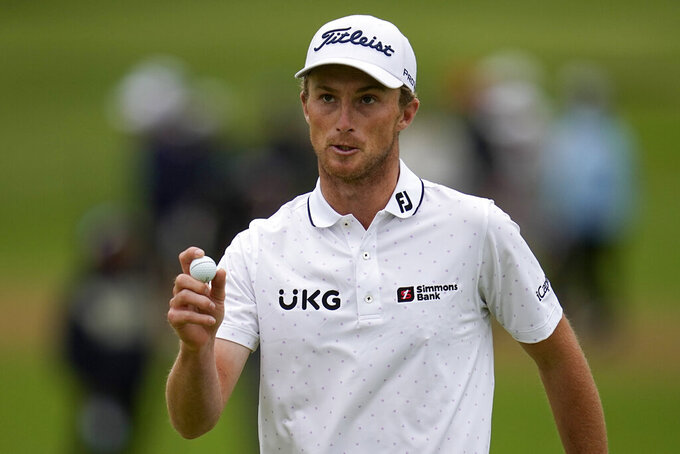 Will Zalatoris waves after making a putt on the 18th hole during the third round of the PGA Championship golf tournament at Southern Hills Country Club, Saturday, May 21, 2022, in Tulsa, Okla. (AP Photo/Sue Ogrocki)

TULSA, Okla. (AP) — The Latest on the final round of the PGA Championship (all times local):

The leaders are off the tee for the final round of the PGA Championship, with Mito Pereira of Chile attempting to become the third major winner from South America and Matt Fitzpatrick trying to track him down from three strokes back.

Pereira has never won on the PGA Tour, let alone won a major. The last full-time tour player who made a major his first victory was Shaun Micheel, who won the 2003 championship at Oak Hill.

The 27-year-old Pereira isn't a total unknown, though. He lost a playoff for the bronze medal at the Tokyo Olympics.

There are plenty of birdies available at Southern Hills during the final round of the PGA Championship, if only someone within shouting distance of the lead is able to string a few of them together.

Rory McIlroy looked as if he might be the guy early on Sunday. He ripped off four in a row to go from even par for the tournament to within five of the lead, only to hit a poor chip shot at the par-3 sixth and drop a shot there.

The back nine in particular should be interesting. The par-5 13th is reachable in two for most of the field, but it presents a quintessential risk-reward situation. The same goes for the 17th, a par-4 reachable off the tee for just about everyone that should present an easy birdie opportunity before the long, challenging uphill 18th.

First-time major winners have been nothing new in golf during this next generation of stars. The PGA Championship is no exception.

Mito Pereira of Chile has a three-shot lead going into the final round at Southern Hills. He is trying to become the first PGA Tour rookie since Keegan Bradley in the 2011 PGA Championship to win a major.

Chasing him are Matt Fitzpatrick of England and Will Zalatoris. Neither has won a major. Fitzpatrick is a two-time Ryder Cup player from England. But he has only one top-10 finish in the 24 previous majors he has played as a pro. Zalatoris was runner-up in the Masters in 2021.

Cameron Young had never made a cut in a major until this week. He's four shots behind.

Eight of the last 13 champions of the PGA had never won a major. That's about the same ratio for the Masters and U.S. Open.

The closest major champions to the lead are Stewart Cink, Justin Thomas and Bubba Watson. All are seven shots behind.