Phil Mickelson returns to seniors with appearance in Arizona 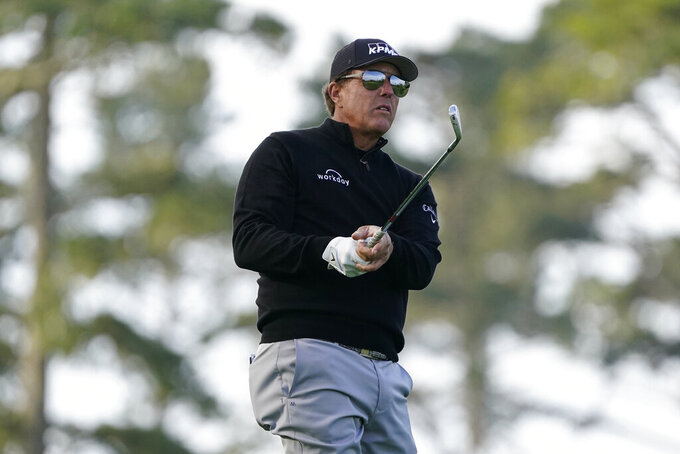 LOS ANGELES (AP) — Now that Phil Mickelson is not eligible for a World Golf Championship, he'll go for a hat trick with the seniors.

The PGA Tour Champions says Mickelson is set to play the Cologuard Classic next week in Tucson, Arizona, where 30 years ago he became the last amateur to win on the PGA Tour.

Now, Mickelson has another slice of history in his sights. He will try to become the first player to win his first three tournaments on the PGA Tour Champions.

Mickelson made his debut on the 50-and-older circuit last August when he was eliminated from the PGA Tour postseason and was looking to stay sharp with the U.S. Open approaching. He won the Charles Schwab Series at Ozarks National in Missouri. Then, he won the Dominion Energy Charity Classic.

This will be the second PGA Tour Champions event of the year, and Mickelson will see some familiar faces. The 81-man field includes Steve Stricker, Davis Love III, Fred Couples, Ernie Els and Jim Furyk, along with Champions Tour stalwart Bernhard Langer.

A big discussion at the Players Advisory Council this week led to The Players Championship having a bigger field.

The Players Championship was the first tournament canceled last year by the COVID-19 pandemic. The PGA Tour returned three months later with one-time changes to eligibility because of lost time.

Among the changes was qualifying for The Players. Instead of the criteria including the top 125 from the previous season's FedEx Cup, it was changed to be a cumulative FedEx Cup points list that began at the start of the 2019-20 season.

Qualifying through the cumulative list is to end after the World Golf Championship and Puerto Rico Open next week.

Still to be determined is how much that causes the 144-man to expand in its new March date with less daylight. Scott Stallings and Brandt Snedeker currently are on the bubble for the cumulative list. Now they would be assured of a spot at Sawgrass because they finished in the top 125 last year.

Tiger Woods previously announced he would miss Torrey Pines and Riviera because he was recovering from a fifth back surgery that he had just before Christmas.

He apparently is not ready to return.

Woods, eligible at No. 48 in the world, was not on the commitment list Friday for the Workday Championship next week at Concessional Golf Club in Florida. That's the World Golf Championship typically held in Mexico City.

Next on the PGA Tour is the Arnold Palmer Invitational at Bay Hill, The Players Championship, the Honda Classic, and the Dell Technologies Match Play.

Woods has not publicly indicated when he might return.