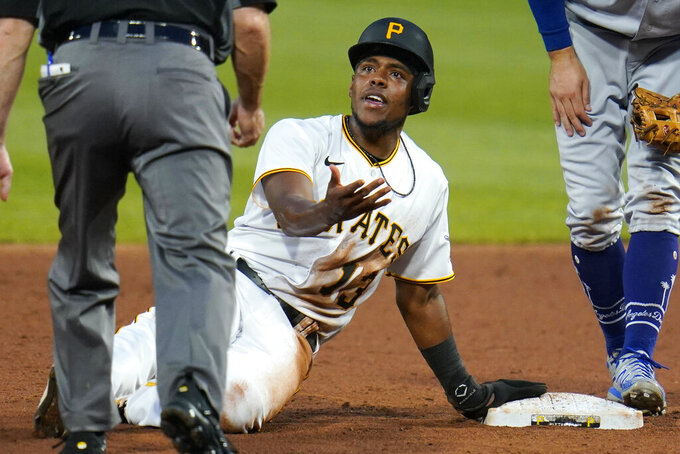 Pittsburgh Pirates' Ke'Bryan Hayes (13) appeals to umpire Dan Iassogna, left, after sliding past second base and being tagged out by Los Angeles Dodgers second baseman Chris Taylor during the third inning of a baseball game in Pittsburgh, Tuesday, June 8, 2021. Hayes remained out and the inning ended. (AP Photo/Gene J. Puskar)

PITTSBURGH (AP) — Ke’Bryan Hayes kept his eyes on the ball — and in the process, the Pirates rookie forgot to touch 'em all.

Hayes missed first base and was called out after hitting a first-inning homer, sending Walker Buehler on his way to seven scoreless innings as the Los Angeles Dodgers beat the Pirates 5-3 Tuesday night.

Hayes stung an opposite-field line drive in the first inning against Buehler that narrowly cleared the right-field wall, just inside the foul pole. Running hard as he tracked the ball, Hayes missed touching first base with his left foot by two or three inches and kept on going.

“Obviously, Ke’ got caught watching the ball,” Pittsburgh manager Derek Shelton said. “It’s one of those things that Ke’ thought he caught the back corner of (the bag), and he didn’t. If he even thinks he misses it, he has to go back and touch it.”

The Pirates did not make Hayes available to reporters following the game.

Buehler (5-0) retired his last 13 batters and had two hits to raise his career batting average to .124. He allowed two hits, struck out two and walked one while throwing 93 pitches.

“The biggest thing for me were the seven innings,” Buehler said. “That’s my job every time I go out there, try to throw as many innings as possible and save some wear on the bullpen.”

Buehler has not lost in his last 21 starts. That matches Clayton Kershaw and Julio Urias for the longest streak for a Dodgers pitcher since the franchise moved to Los Angeles in 1958.

“He was great,” Dodgers second baseman Chris Taylor said. “He was working fast, was throwing strikes and had all his pitches working. I love playing defense behind him. He almost lulls the other team to sleep and, all of a sudden, it’s the seventh inning.”

Hayes was also thrown out at second base trying to tag up from first on a flyout to left field to end the third inning, over sliding the bag.

The 24-year-old Hayes — son of 14-year big leaguer Charlie Hayes — hit .376 with five homers in 24 games last season and entered 2021 as a heavy favorite to win NL Rookie of the Year. He sprained his left wrist in Pittsburgh’s second game and missed two months, finally returning to action last week.

“That’s a once-in-a-lifetime thing and it won’t happen again,” center fielder Bryan Reynolds said. “That could have easily been a day-ruiner for him and he could have mentally checked out, but he had a lot of good at-bats after that, which says a lot about him as a player and as a person.”

Pirates rookie JT Brubaker (4-5) shut out the Dodgers through four innings but did not make it out of the fifth, when Los Angeles scored three times.

Taylor’s two-run homer to left-center field in the sixth inning off Chris Stratton raised the Dodgers’ lead to 5-0.

Pittsburgh ruined the shutout in the eighth inning when Adam Frazier hit a run-scoring double off Joe Kelly to extend his hitting streak to 11 games. Reynolds and pinch-hitter Michael Perez hit solo home runs in the ninth inning off Nate Jones to cut the Pirates’ deficit to 5-3.

Kenley Jansen came on to get the last out for his 13th save.

Brubaker gave up three runs and five hits in 4 2/3 innings while striking out six and walking none. He was pitching for the first time since May 29 after spending time on the bereavement list following the death of his grandmother.

Los Angeles had lost six of its previous nine games.

The start of the game was delayed 30 minutes by rain.

Dodgers: RHP Tony Gonsolin (right shoulder inflammation) is expected to be activated from the injured list Wednesday and make his season debut by starting against the Pirates. ... Muncy went 2 for 5 in returning to the lineup after sitting out a game with right ankle pain. ... SS Corey Seager’s broken right hand is healing faster than expected, according to Roberts, but there is no timetable for the return of last year’s World Series MVP. ... LHP Garrett Cleavinger (left forearm inflammation) pitched one scoreless inning in his first game on a rehab assignment with Triple-A Oklahoma City.

Pirates: RHP Mitch Keller was activated from the COVID-19 injured list and INF/OF Phillip Evans from the IL. Keller is scheduled to start Thursday against the Dodgers. ... LHP Austin Davis was optioned to Triple-A Indianapolis and INF Wilmer Difo was designated for assignment.