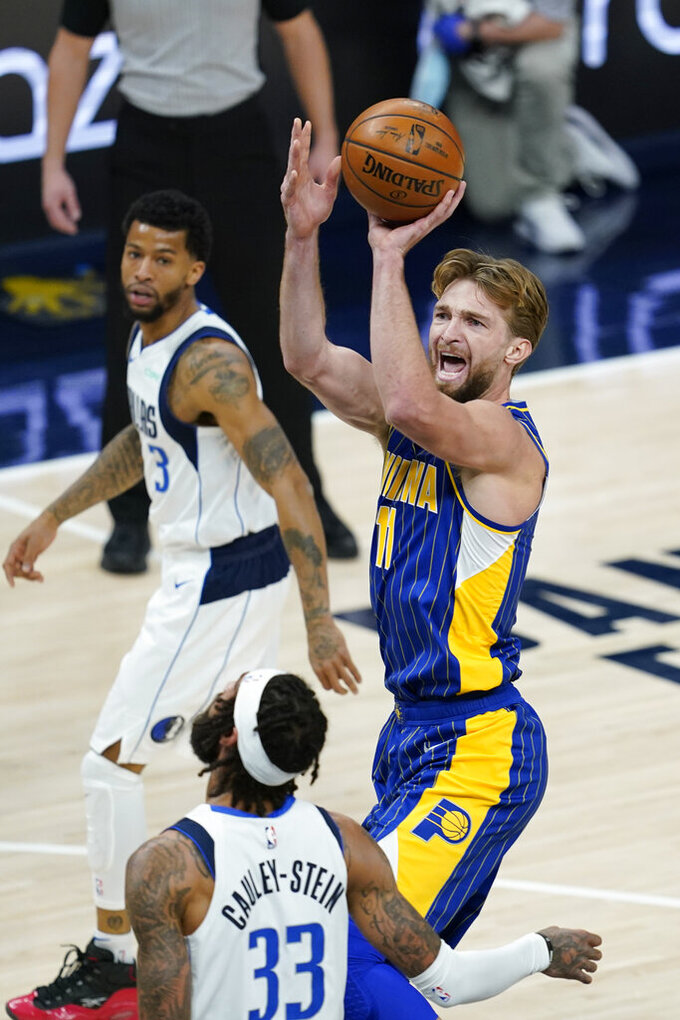 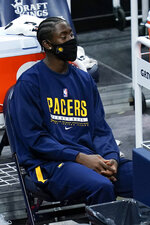 INDIANAPOLIS (AP) — Kristaps Porzingis posted season-high totals of 27 points and 12 rebounds in leading the Dallas Mavericks to a 124-111 victory at Indiana on Wednesday night.

The short-handed Pacers have lost two straight by double digits, their two most lopsided losses of the season. Malcolm Brogdon had 26 points and Domantis Sabonis finished with 25 points and 10 rebounds, giving him a franchise-record 14 in a row.

Dallas took the lead for good on the final basket of the third quarter and pulled away with an 11-4 run in the fourth.

The Mavericks were in control most of the night after using an early 15-3 run to take a 37-22 lead late in the first quarter.

Indiana closed the deficit to 65-63 at the half, then took its first lead when Edmond Sumner's 3-pointer broke a 67-all tie early in the third. It didn't last long.

Porzingis scored all of the Mavericks points in a 9-2 run and Dallas eventually extended the margin to 84-76.

Mavericks: Doncic appeared to hurt his left knee three times during the game. He limped around briefly each time but still managed to finish the game. ... Trey Burke scored 22 points off the bench. Tim Hardaway Jr. had 19 points. ... Dallas played without Dorian Finney-Smith, Maxi Kleber Dwight Powell and Josh Richardson because of COVID-19 protocols. ... The Mavs are 5-1 when scoring at least 110 points.

Pacers: Newly acquired guard Caris LeVert sat on Indiana's bench and received a warm welcome from the small crowd when he was introduced late in the first half. ... The Pacers gave up a season-high 37 points in the first quarter. ... Center Myles Turner, the NBA leader in blocks, sat out with a fractured right hand. ... Doug McDermott had 12 points and Aaron Holiday finished with 11. ... Brogdon alos had five assists. .. Indiana was outrebounded 47-36.

In their first home game since trading two-time All-Star Victor Oladipo to Houston for LeVert, the Pacers got a familiar face back on the floor — guard Jeremy Lamb. He made his season debut came with 55.8 seconds left in the first quarter.

Lamb hadn't played since injuring his left knee Feb. 23, 2020. He was diagnosed with a torn anterior cruciate ligament, a torn medical collateral ligament and a fractured femur — the bone just above the knee. Lamb was perfect in the first half, going 4 of 4 from the field, including one 3 while making his only free throw. He didin't make another shot and finished with 10 points in 19 minutes.

Indiana played its first seven games with only a few dozen people sitting in the second deck of Bankers Life Fieldhouse. That's about to change.

Mavericks: Play at San Antonio on Friday, the final stop on a three-game road trip.