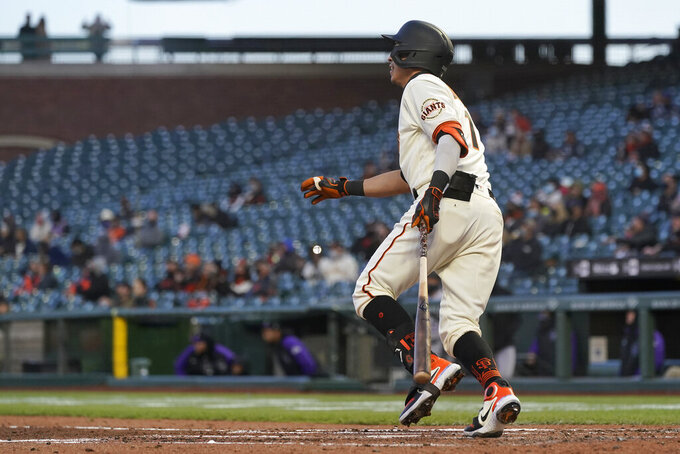 This time, he really had nothing to scrutinize.

Anthony DeSclafani pitched a three-hitter, Evan Longoria had a two-run double and an RBI single after sitting out three games with a sore left hamstring, and the San Francisco Giants routed the Colorado Rockies 12-0 on Monday night.

“It was nice to have a very well-pitched game, a crisp game on defense and to score a bunch of runs,” Kapler said. “There's not much to complain about tonight. ... What's there to pick apart? The guys did a great job.”

Mauricio Dubon drove in four runs and Buster Posey had a two-run homer among his four hits to give DeSclafani (2-0) all the run support he needed and then some. The right-hander struck out nine and walked one as the Giants took over the major league ERA lead at 2.81 in a game that ended in just 2 hours, 27 minutes.

“I think a lot of things in this game are contagious — hitting’s contagious, defense is contagious and I think pitching is, too,” Posey said. “Somebody goes out and has a good outing and the next guy wants to follow it up. I think we’re seeing some of that. Hopefully it’s a wave we can continue to ride. It’s been fun to be a part of.”

DeSclafani’s only other complete game in 130 major league starts was a four-hit shutout for Cincinnati at Arizona in August 2016.

“I’m just going to note, I had a bird poop on me earlier this week and I was like, ‘You know what? It's got to be good luck,’ and I think it showed tonight," DeSclafani said. "So I was happy.”

San Francisco jumped to a quick 4-0 lead, getting an RBI double by Posey and run-scoring singles from Longoria and Darin Ruf along with Alex Dickerson's groundout that brought in another run.

After Longoria's hit in the second, he was lifted for a pinch-runner to be cautious with his leg. The Giants chased lefty Austin Gomber (1-3) three batters later following consecutive two-out walks and then kept scoring.

Dubon greeted reliever Jhoulys Chacín with a three-run double to make it 9-0 and added a sacrifice fly in the fourth.

DeSclafani allowed three earned runs in his most recent outing after giving up two overall through his initial three starts.

Longoria returned to the lineup for the first time since Thursday. Second baseman Wilmer Flores also played a day after receiving an IV upon leaving the game in the third inning not feeling well.

Gomber was tagged for nine runs and seven hits in 1 2/3 innings as the Rockies dropped to 0-7 on the road. Manager Bud Black said they would watch video to see if Gomber was giving anything away that the Giants figured out.

“A lot of the hits were just middle of the plate," Gomber said. "I think it was more about execution and putting myself in bad counts. They had a good game plan.”

Posey has five home runs in April, his most in a month since hitting six in May 2017.

He connected at home for the first time since Sept. 24, 2019, also against Colorado, much to the delight of the 4,129 fans who braved the blustery, cool conditions. Posey, who opted out of the coronavirus-shortened 2020 season, has 27 career homers and 104 RBIs in 148 games versus Colorado.

Seventh-year Rockies general manager Jeff Bridich is stepping down, the team announced earlier in the day, saying the decision was a mutual agreement. The team will appoint an interim general manager for the rest of the season before launching a search following the postseason.

Black planned to address his club before the series opener at San Francisco about focusing on playing.

Giants: San Francisco is hopeful SS Brandon Crawford will play Tuesday night. He was scratched Saturday after missing time last week with a strain in his upper right ribcage area. ... OF Mike Yastrzemski had an MRI exam Monday morning after he exited Sunday's game with tightness in his left side and the test result showed “a very mild oblique strain,” according to Kapler. “We're hopeful that he can avoid the IL.” ... RHP Reyes Moronta, eligible to come off the injured list from a strained elbow, is set to throw live batting practice Tuesday. He could be activated as soon as next Monday at Colorado. ... RHP Tyler Beede, who had Tommy John surgery in March 2020, threw his first live BP and Kapler said “it went great,” with Beede throwing his curveball and changeup for strikes. ... RHP Johnny Cueto will throw bullpens Wednesday and Saturday, then a live BP session Tuesday or Wednesday next week. “Our earliest thought on when he might make a start would be the 9th of May, potentially the 10th or 11th,” Kapler said.