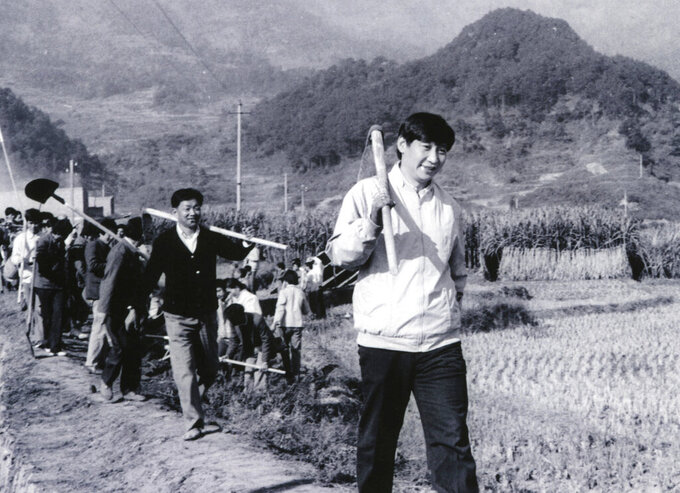 FILE - A 1988 photo provided by China's Xinhua News Agency shows Communist Party Leader Xi Jinping, right, then secretary of the Ningde Prefecture Committee of the Communist Party of China (CPC), participates in farm work during his investigation in the countryside. Born in Beijing in 1953, Xi enjoyed a privileged youth as the second son of Xi Zhongxun, a former vice premier and guerrilla commander in the civil war that brought Mao Zedong's communist rebels to power in 1949. At 15, Xi Jinping was sent to rural Shaanxi province in 1969 as part of Mao's campaign to have educated urban young people learn from peasants. (AP Photo/Xinhua, File)

BEIJING (AP) — The last time the Olympics came to China, he oversaw the whole endeavor. Now the Games are back, and this time Xi Jinping is running the entire nation.

The Chinese president, hosting a Winter Olympics beleaguered by complaints about human rights abuses, has upended tradition to restore strongman rule in China and tighten Communist Party control over the economy and society.

Xi was in charge of the 2008 Summer Olympics in Beijing that served as a “coming-out party” for China as an economic and political force. A second-generation member of the party elite, Xi became general secretary of the party in 2012. He took the ceremonial title of president the next year.

Xi spent his first five-year term atop the party making himself China's strongest leader at least since Deng Xiaoping in the 1980s. Xi was dubbed “chairman of everything” after he put himself in charge of economic, propaganda and other major functions. That reversed a consensus for the ruling inner circle to avoid power struggles by sharing decision-making.

The party is crushing pro-democracy and other activism and tightening control over business and society. It has expanded surveillance of China’s 1.4 billion people and control of business, culture, education and religion. A “social credit” system tracks every person and company and punishes infractions from pollution to littering.

Xi wants China to be “the greatest country on Earth, widely admired and therefore followed,” said Steve Tsang, a Chinese politics specialist at the School of Oriental and African Studies in London.

“The world where China is top dog is a world where authoritarianism is safe,” Tsang said. Democracies will ”need to know their place.”

Born in Beijing in 1953, Xi enjoyed a privileged youth as the second son of Xi Zhongxun, a former vice premier and guerrilla commander in the civil war that brought Mao Zedong's communist rebels to power in 1949. At 15, Xi Jinping was sent to rural Shaanxi province in 1969 as part of Mao’s campaign to have educated urban young people learn from peasants. Xi was caught trying to sneak back to the Chinese capital and returned to Shaanxi to dig irrigation ditches.

“Knives are sharpened on the stone. People are refined through hardship,” Xi told a Chinese magazine in 2001. “Whenever I later encountered trouble, I’d just think of how hard it had been to get things done back then and nothing would then seem difficult.”

Beijing is pushing for a bigger role in managing trade and global affairs to match its status as the second-biggest economy. It has antagonized Japan, India and other neighbors by trying to intimidate Taiwan — the island democracy that the ruling party says belongs to China — and by pressing claims to disputed sections of the South and East China Seas and the Himalayas.

The party has ended limits on foreign ownership in its auto industry and made other market-opening changes. But it has declared state-owned companies that dominate oil, banking and other industries the “core of the economy."

Beijing is pressuring private sector successes such as Alibaba Group, the world's biggest e-commerce company, to divert billions of dollars into nationalistic initiatives including making China a “technology power” and reducing reliance on the United States, Japan and other suppliers by developing processor chips and other products.

That, combined with U.S. and European curbs on Chinese access to technology due to security fears, is fueling anxiety global industry might decouple or split into markets with incompatible auto, telecom and other products. That would raise costs and slow innovation.

Xi, 68, looks certain to break with tradition again by pursuing a third term as party leader at a congress in October or November. He had the constitution’s limit of two terms on his presidency repealed in 2018. That reversed arrangements put in place in the 1990s for party factions to share decision-making and hand over power to younger leaders once every decade.

Even before Xi took power, party officials complained that group leadership was too cumbersome and allowed lower-level leaders to ignore or obstruct initiatives. Officials defend Xi's efforts to stay in power by saying he needs to ensure reforms are carried out.

Xi led an anti-corruption crackdown whose most prominent targets were members of other factions or supported rival leadership candidates. The campaign was popular with the public but led to complaints that officials refused to make big decisions for fear of attracting attention.

Xi has called for a “national rejuvenation” based on tighter party control over education, culture and religion. Many of the changes are hostile to ethnic minorities, gays and lesbians, pro-democracy and other activists and independent-minded artists and writers. Social media groups for gay university students have been shut down. Men deemed insufficiently masculine were banned from TV.

An estimated 1 million Uyghurs and members of other mostly Muslim minority groups have been confined in camps in the Xinjiang region in the northwest. Activists complain Beijing is trying to erase minority cultures, but officials say the camps are for job training and to combat radicalism. They reject reports of force abortions and other abuses.

Xi oversaw the 2015 detention of more than 200 lawyers and legal aides who helped activists and members of the public challenge official abuses.

After the coronavirus emerged in 2019, Xi’s government suppressed information and punished doctors who tried to warn the public. That prompted accusations Beijing allowed the disease to spread more widely and left other countries unprepared.

Beijing extended its crackdown to Hong Kong following 2019 protests that began over a proposed extradition law and expanded to include demands for greater democracy.

A national security law was imposed on Hong Kong in 2020, prompting complaints that Beijing was eroding the autonomy that had been promised when the former British colony returned to China in 1997 — and ruining its status as a trade and financial center.

Pro-democracy figures have been imprisoned. They include Jimmy Lai, the 73-year-old former publisher of the Apple Daily newspaper, which shut down under government pressure, and organizers of candlelight memorials of the party’s deadly 1989 crackdown on a pro-democracy movement.

A big potential stumbling block to achieving Xi's ambitions is the struggling economy. Growth is slumping after Beijing tightened controls on use of debt in its real estate industry, one of its biggest economic engines. That adds to the drag from politically motivated initiatives, including tech development and orders to manufacturers to use Chinese suppliers of components and raw materials, even if that costs more.

“Xi himself weakens the economy rather than strengthening it,” Tsang said. "If you mess up the economy, he's not going to make China the dominant power in the world.”