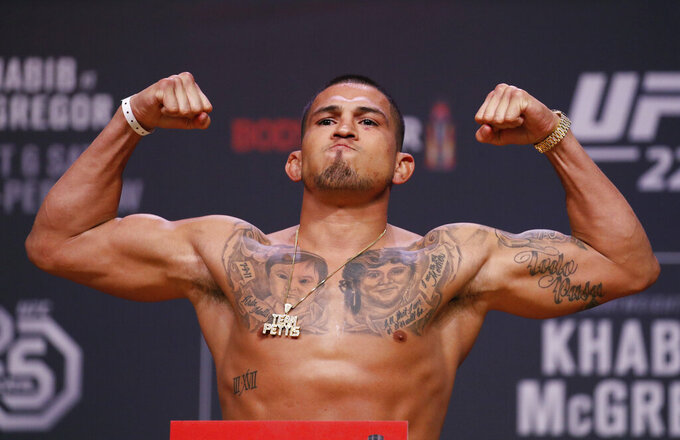 FILE - Anthony Pettis poses during a ceremonial weigh-in for the UFC 229 mixed martial arts fight Friday, Oct. 5, 2018, in Las Vegas. The Professional Fighters League says it has raised $65 million in new financing to boost its expansion and growth. The mixed martial arts promotion announced in a statement Thursday, Feb. 18, 2021 that the money will go toward talent acquisition and international expansion. (AP Photo/John Locher, file)

LOS ANGELES (AP) — The Professional Fighters League says it has raised $65 million in new financing to boost its expansion and growth.

The mixed martial arts promotion announced in a statement Thursday that the money will go toward talent acquisition and international expansion. The PFL returns to competition this spring after canceling its 2020 season amid the coronavirus pandemic.

Unlike most combat sports entities, the PFL competes in a season-long format that includes playoffs and championship fights. The promotion hasn't held an event since December 2019, but will begin its current season April 23 in Las Vegas.

Despite its hiatus, the PFL has continued to grow by reaching a broadcast deal with ESPN and acquiring several well-known fighters who have yet to compete for the organization. The PFL returns this year with Canadian welterweight Rory MacDonald, former UFC heavyweight champion Fabrício Werdum and former UFC lightweight champion Anthony Pettis.

The promotion was known as the World Series of Fighting from 2012 to 2017, when it was bought and rebranded. The PFL held full-season competitions in 2018 and 2019.

The PFL says its new round of financing was led by Ares Capital, Elysian Park Ventures and Knighthead Capital.

Elysian Park Ventures is the investment arm of the Los Angeles Dodgers’ ownership group, while Ares Capital is the subsidiary of an investment company cofounded by Atlanta Hawks owner Antony Ressler.

Along with its acquisitions of well-known former UFC fighters, the PFL recently signed two-time Olympic boxing gold medalist Claressa Shields for her MMA debut, which is expected to take place this summer in a standalone event.