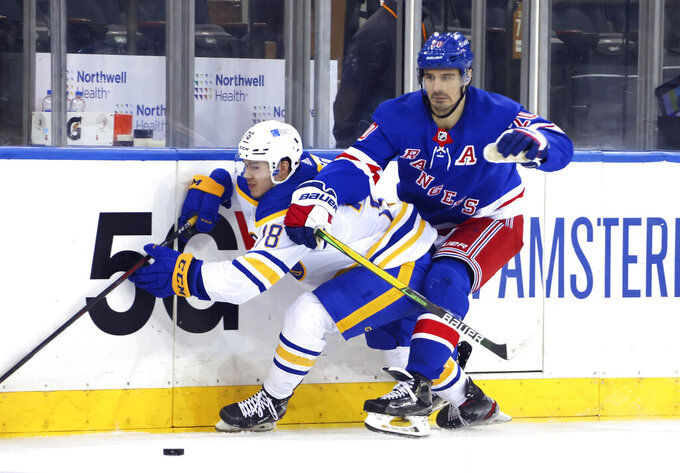 Mika Zibanejad didn’t want to use COVID-19 as an excuse for his slow start this season.

With just three goals in the New York Rangers’ first 27 games, there were questions about his struggles.

“It was hard, it wasn’t easy and everyone reacts to it differently,” Zibanejad said on a Zoom call with reporters. “I wasn’t feeling very good. I told you guys I was fine, but it was just for my sake I didn’t want to create anything around that or put that in my own head really.”

Zibanejad had a second-half surge and scored 21 goals over the final 29 games and finished with 50 points. His 24 goals gave him the team lead for the fourth straight season.

“Just to end the season the way I did it was obviously a huge confidence boost in that way and with everything that was going on right before the season and the first couple of months, the first six weeks, I’m happy I was able to bounce back and get through it,” he said.

The Rangers, with one of the youngest teams in the NHL, also got off to a slow start but picked up their play and contended for a playoff spot until the penultimate weekend of the season.

“I think the group really came together over the course of the year,” forward Chris Kreider said. “Youngest team in hockey, a lot of new faces, lot of new guys stepping into roles and positions they may not have been in the past. I think the entire year was a terrific learning experience.”

There were plenty of bright spots. Artemi Panarin led the team with 58 points in 42 games. Ryan Strome (14 goals, 35 assists), Pavel Buchnevich (20 goals, 28 assists) and Adam Fox (five goals, 42 assists) also topped 40 points. Alexis Lafrenière, the No. 1 pick in last year's draft, had 12 goals and nine assists, and Kaapo Kakko — the No. 2 overall pick in 2019 — had nine goals and eight assists.

The aftermath of a brawl against the Washington Capitals led team owner James Dolan to question the team's toughness and make a change in the front office in the final week of the season.

Now, with former captain Chris Drury having taken over as president and general manager, the Rangers headed into the offseason with some questions about their future despite making strides in their rebuilding effort.

The first set of answers could come as soon as Drury makes a decision about coach David Quinn’s status. The Rangers are 96-87-25 in three seasons under Quinn, and Drury said last week he would evaluate everything once the season is over.

If Drury decides to make a change, he could promote Hartford Wolf Pack coach Kris Knoblauch, who filled it while Quinn and the coaching staff were sidelined with COVID-19. There are also several experienced NHL coaches available such as former Rangers coach John Tortorella.

Regardless of who will be leading the way, the objective after a quick exit in last year's play-in round and a fifth-place finish in the pandemic-shortened, division-only season this year is crystal clear.

“Our attitudes starting right now when we leave the rink is we’re making the playoffs next year,” Kreider said. “That’s our goal and everything that we do, everything will be working towards during the course of the summer going to the preseason is going to be built towards that one goal.”

The Seattle Kraken are set to become the NHL’s 32nd team and will be stocking their franchise with the expansion draft.

The Rangers will likely lose a player, possibly a forward such as Brett Howden or Filip Chytil (if either restricted free agent receives a qualifying offer and is left unprotected).

Defenseman Tony DeAngelo, waived by the team in late January but still under contract for next season, is another possibility.

Jack Eichel is reportedly unhappy with the Buffalo Sabres and could be dealt this summer. The Rangers finished 10th in scoring at 3.14 goals per game, but also struggled to score at times — getting shut out seven times, third most in the league. Adding some scoring could be attractive, but landing the star center, who is at odds with the Sabres over how to treat his injury, would be part of a blockbuster trade that would see some big names going the other way.

Defenseman Brendan Smith is an unrestricted free agent after finishing a four-year, $17.4 million deal. In addition to Chytil and Howden, other key restricted free agents that must be re-signed include Buchnevich and goalie Igor Shesterkin. Defenseman Ryan Lindgren just got a new three-year deal. Forward Phillip di Guiseppe and defenseman Libor Hajek are also RFAs. And looking ahead, Zibanejad and Strome will be UFAs next summer.