Raptors will be short-handed when they return to floor 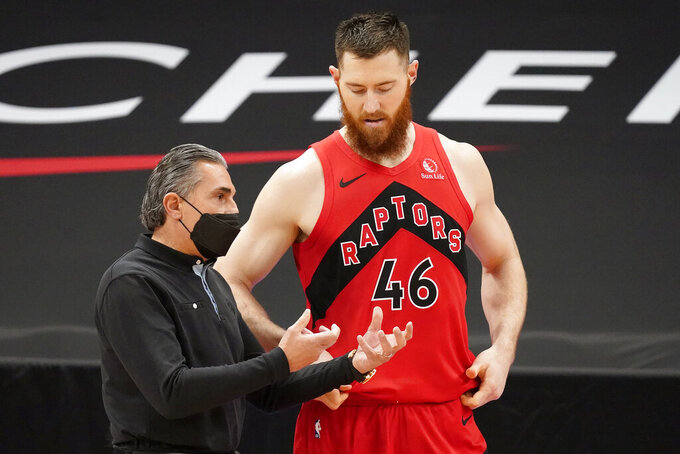 Toronto Raptors assistant coach Sergio Scariolo talks to center Aron Baynes (46) during the first half of an NBA basketball game against the Houston Rockets Friday, Feb. 26, 2021, in Tampa, Fla. Scariolo is filling in for head coach Nick Nurse, who is under coronavirus protocol. (AP Photo/Chris O'Meara) 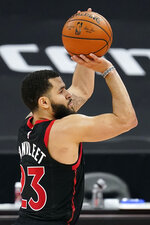 The Toronto Raptors will have enough players to get back on the floor Wednesday, after a pair of games earlier this week were postponed for virus-related issues.

But the Raptors will be seriously short-handed when they host the Detroit Pistons in Tampa, Florida — with starters Fred VanVleet, Pascal Siakam and OG Anunoby all ruled out in accordance with the league’s health and safety protocols, along with Malachi Flynn and Patrick McCaw.

Also still out: coach Nick Nurse, who entered the protocols last week along with five other members of his staff. Assistant coach Sergio Scariolo, who led Toronto to a win in its most recent game on Friday, will remain in the acting-coach role on Wednesday.

“We will try to do our best for the guys who won’t be able to be with us tomorrow,” said Scariolo, who has been in contact with Nurse regularly throughout this process.

The Raptors were able to do some on-court work Tuesday but have had “multiple days of no new cases,” general manager Bobby Webster said.

“It’s been a tough couple of days,” Webster said. “To get to here and be able to practice, we had to clear a number of hurdles.”

Toronto has two games left before the All-Star break, with the Wednesday game against Detroit to be followed by a Thursday matchup at Boston. Webster indicated that the players who will be sidelined Wednesday aren’t expected back Thursday.

The Raptors’ games against Chicago on Sunday and Detroit on Tuesday were pushed back, bringing the league’s total number of games moved because at least one team would not have enough players eligible to play this season to 31. The Wednesday game between Toronto and Detroit is a makeup of the Tuesday contest.

“It’s what you can imagine,” Webster said. “It’s the emotional stress of having colleagues that potentially, obviously, can be sick. The enormous amount of stress everyone feels, everyone’s walking a bit on eggshells here in the locker room and you can’t necessarily be as friendly. ... The basketball will go on, we’ll play the games, but just to maintain everybody’s belonging and familiarity is really important.”

The only teams that have not had a game postponed by virus issues so far this season are Brooklyn, the Los Angeles Clippers and the Los Angeles Lakers. But the Lakers had an issue appear on their injury report Tuesday, when they ruled center Marc Gasol out for their game against Phoenix because of the protocols.

And the New York Knicks lost Derrick Rose for Tuesday's game, placing him on the protocols list for their game in San Antonio about an hour before that contest was to start. Entering the protocols can mean any number of things, including but not limited to a positive test, an inconclusive test or contact tracing suggesting possible exposure to a person positive for COVID-19.

The roster hits to the Raptors are significant. VanVleet and Siakam are tied for Toronto’s team lead in scoring at 20.1 points per game, and Anunoby is averaging 13.8 points. VanVleet was also the only Toronto player to start all 34 of the team’s games this season.

The Raptors called up a pair of reinforcements from their Raptors 905 team in the G League bubble in nearby Lake Buena Vista, Florida — bringing in Jalen Harris and Donta Hall for Wednesday.