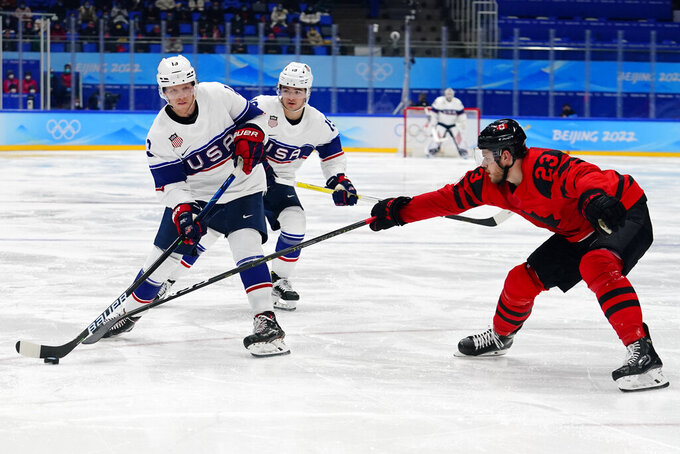 BEIJING (AP) — Here's one thing the pandemic has made easier for the young stars of the Beijing Olympics: juggling the demands of elite athletic competition with college life.

Remote schooling, now a fact of life for students everywhere, also comes in handy when you're a world away from campus for weeks at a time. And the technology has been battle tested for two years now.

Nathan Smith, a student at Minnesota State University and one of 15 college players on the U.S. men’s hockey team, has been able to keep up with his school work and even talk with his teachers.

“I wasn’t sure what kind of connection and everything I’d have over here,” Smith said. “I’m trying to do my best and keep up with it.”

Devon Levi, a goaltender for the Canadian men’s hockey team and a student at Northeastern University in Boston, said his teachers have been supportive of his athletic endeavors, so he’s doing his part to keep up to date with his studies. He brought his books with him to Beijing.

“It’s a once-in-a-lifetime opportunity and they completely understand that,” said Levi, who is majoring in computer science and business. “They’re on my side and they want me to chase my dreams.”

Other elite athletes at the Winter Games have opted to take time off from school to compete, including Jared Shumate, a member of the U.S. Nordic combined team who is studying geography and sociology at the University of Utah.

Balancing school and skiing "has definitely gotten easier than it was my first couple of years when I was living in the dorms and taking in-person classes and training,” he said.

By the time they reach the elite level of their sports, most young Olympians are experienced at balancing academic and competitive demands, said Michelle Smith Ware, a board member of the national academic advising group NACADA.

Not everyone is able to strike that balance. Hong Kong skier Arabella Ng reportedly opted to drop out of the Beijing Games, citing academic pressures and the travel restrictions in place because of the pandemic.

“Either you’re giving up your spot, or you’re taking a leave from your education, or you are meeting that challenge of maintaining the workload during a semester while also working and conditioning and working or playing in the Olympics," she said. "It has to be a difficult (decision).”

The U.S. figure skating team is stacked with Ivy Leaguers who decided to put their education on hold to fulfill their Olympic dreams once the coronavirus crisis began and classes moved to Zoom anyway.

Nathan Chen said the only thing he was sure of after winning gold in Beijing was that he wanted to go back to school in August.

Even before the pandemic, some athletes had tapped into remote schooling options in order to focus on their sports.

Smolkin said the club has an arrangement with the University that allows them to pursue their studies from afar.

“It’s all remote learning, so we have no problem with it," Smolkin said. “They make some concessions for us. Now it’s the Olympics and they give us time so we can concentrate on competing, but after that we will undergo all the assessments.”

Even after the pandemic subsides, Ware said, the benefits of remote schooling will remain a resource for those balancing elite athletics with campus life.

“There’s a lot of opportunities for that to be used after COVID," Ware said. "I’m not sure how institutions will choose to embrace that. Why not use the technology?”