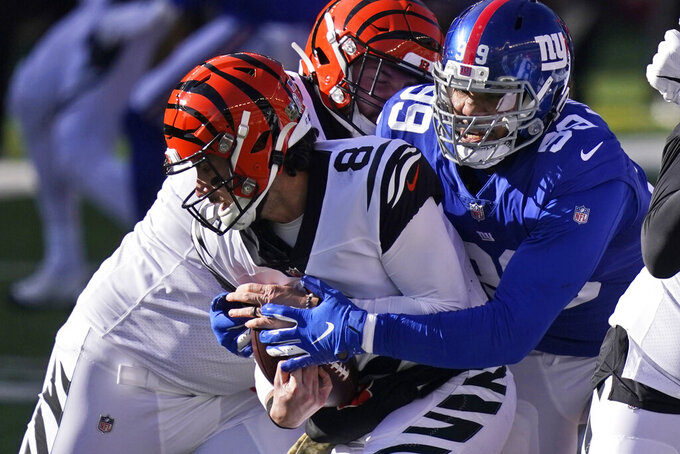 COLUMBUS, Ohio (AP) — Guard Xavier Su’a-Filo is available this week for the first time since an ankle injury sidelined him in the season opener. That's good news for an offensive front that has been plagued by injuries and inconsistent play.

The 29-year-old Su’a-Filo, who was signed to a three-year, $9 million contract in the offseason to shore up the line, was the starter at right guard when he was hurt in the Sept. 15 loss to the Chargers. That began a string of injuries to linemen that has limited the offense.

Coach Zac Taylor wouldn't say Wednesday what Su’a-Filo's role will be Sunday against the Miami Dolphins, but with guard Alex Redmond in concussion protocol it's likely to be significant. Other linemen also have become available after midseason injuries and illnesses, so the unit will be in fairly good shape for a change.

“We've got plenty of able bodies to help us,” Taylor said.

Su’a-Filo barely got a chance to show what he could do for the Bengals.

“I'm excited to be brought back, and (for) whatever role — it's not determined yet for me — I'll be prepared,” he said.

Cincinnati (2-8-1) is counting on a healthy line to help shore up the running game, which hasn't gotten any traction since Joe Mixon went out with a foot injury Oct. 18. Veteran Giovani Bernard has been filling in as the bell cow, but linemen have struggled to move defenders. The Bengals mostly stopped trying to run in the second half last week against the Giants.

There is also hope that another week of practice reps for quarterback Brandon Allen will improve his performance. Allen was promoted from the practice squad and thrown into the starting role after rookie Joe Burrow went down with a season-ending injury in the Nov. 22 loss to Washington.

In his first start, last week's 19-17 loss to the Giants, Allen managed 136 passing yards, tossed an interception and fumbled while being sacked on a late play that sealed the win for New York. It was his first time playing in a year and, despite being the practice squad QB all season, his first time in Paul Brown Stadium for a game.

“We support him,” Taylor said. “It’s not always easy, and we know that we didn’t play well enough around him, too. There are things he could have done better. There are things everybody could do better. We expect a better performance from our team this week, and he’s only going to get better as his reps increase and he gets more reps with these receivers.”

Ryan Finley will be Allen's backup, Kevin Hogan will be the practice squad quarterback and be kept apart from the two others because of COVID-19 protocols.

“There's a lot on the film that I saw that can get better: getting to my second read, my third read, getting the ball out of my hands in certain situations and, obviously, protecting the football a little bit better than I did," Allen said.