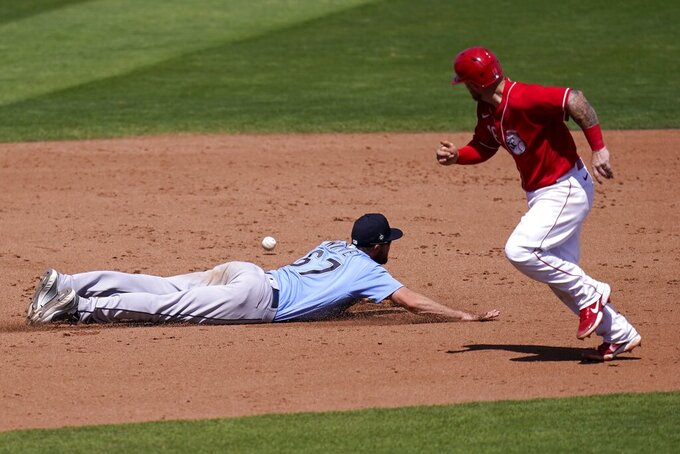 Anthony Rizzo is cutting off talks with the Chicago Cubs on a new contract and is prepared to play the season as free agency looms after the World Series.

“Obviously there’s been talks and whatnot, but it doesn’t look like really at this time anything is going to be finalized and look forward to just opening up Thursday and starting this journey with this team,” Rizzo said Monday.

Rougned Odor, the Texas Rangers’ starting second baseman the past seven seasons, has been told he won’t be on the opening day roster after switching to third base this spring training.

President of baseball operations Jon Daniels said the Rangers don’t have an everyday role for Odor. The 27-year-old infielder has two more seasons and $24.6 million left on his six-year contract, and a $3 million buyout for a $13.5 million team option in 2023.

“I think really what it came down to was we’ve made a decision, obviously a pretty clear direction looking towards the future. And playing him every day was not in our plans this year,” Daniels said. “As we look forward, we think we’re going to have some younger players coming up. And we didn’t think it was in his best interest or our best interest to kind of force the issue into a bench role.”

Card games, car pools and eating at restaurants may be back in the major leagues later this season. Trips to church and sponsor events may return, too.

Mask use would be dropped from dugouts and bullpens, and electronic tracing devices would be eliminated when 85% of major league players and primary field staff are vaccinated. Communal clubhouse video would return before and after games. Pool tables would be restored, along with team saunas.

A three-page memorandum from Major League Baseball and the players’ association sent to players and staff on Monday and obtained by The Associated Press also stated “all players and staff are strongly encouraged to receive one of the approved COVID-19 vaccines when eligible.”

Not many players have been vaccinated, according to MLB, but it expects the pace to increase after teams return to their home cities from spring training. Opening day is Thursday.

Randy Dobnak’s road to the major leagues was so far off the traditional path he even chauffeured some ride-share customers along the way.

The Minnesota Twins delivered the overachieving right-hander another big-time moment in the form of a $9.25 million, five-year contract that includes three club options and could be worth $29.75 million over eight seasons.

“I always believed in myself, even since I was a little kid. You have career days and stuff when you’re in elementary school and whatnot, and I was always like, ‘I want to be a baseball player,’” said Dobnak, whose place as the swingman of the 13-pitcher staff was secured last week.

Chad Kuhl’s long road back from Tommy John surgery is over.

More than two years removed from wondering where his career was heading after doctors reconfigured his mangled right elbow, Kuhl will be Pittsburgh’s opening day starter in Chicago on Thursday when the Pirates face the Cubs.

The 28-year-old is the longest-tenured starter on a staff that is largely inexperienced and largely anonymous. The void left by the offseason departures of Jameson Taillon, Joe Musgrove, Trevor Williams and Chris Archer is palpable. Kuhl knows he will play a major role in trying to fill it.

“We talk about the guys that have left and there’s a lot of leadership, a lot of innings to take up, a lot of youth on this team,” he said. “So it adds to the leadership role that me and (Steven) Brault and those guys are trying to take over. It’s just trying to lead by example, do the right things.”

NOT IN THE CARDS

The St. Louis Cardinals plan to start the season Thursday in Cincinnati with pitchers Kwang Hyun Kim, Dakota Hudson and Miles Mikolas on the injured list along with outfielder Harrison Bader.

Hudson always planned to begin on the season on the injured list as he recovers from Tommy John surgery. Kim is dealing with a back injury, Mikolas with a sore shoulder and Bader has a strained right foreman that could keep him out a month, the Cardinals said Sunday.

Stephen Strasburg gave up two runs, four hits and three walks in 5 2/3 innings. Astros starter Jake Odorizzi allowed an unearned run and three hits, leaving with the bases loaded in the third, then Odorizzi, returned to get one out in the fourth.

Nolan Arenado hit his first home run for St. Louis, a solo shot in the first. Edmundo Sosa hit a tying homer off Trevor Hildenberger in the ninth. Adam Wainwright allowed two runs and three hits in 2 2/3 innings. Starter Carlos Martínez entered in the fourth and gave up only a walk in three scoreless innings. Taijuan Walker allowed two runs and three hits in five innings.

Chad Kuhl was announced as the Pirates’ opening-day starter. Erik Gonzalez hit his second home run and Ke’Bryan Hayes raised his average to .429 with two hits. Mitch Garver went 0 for 4 in his first action since the Minnesota catcher took a foul tip off his left index finger on Thursday, Willians Astudillo homered and Jake Cave had an RBI triple.

Craig Kimbrel allowed a hit and a walk while striking out two in an inning of relief. Pedro Strop struck out two in the ninth. Willson Contreras had three hits including a double and a home run and Nico Hoerner hit a three-run homer. Cubs starter Zach Davies allowed one run and two hits in 3 1/3 innings. Arizona's Caleb Smith gave up seven runs on eight hits over 3 2/3 innings, and Christian Walker hit his fifth homer.

Chris Flexen allowed two hits in three innings. Closer Rafael Montero allowed a run on two hits and a pair of walks and got just two outs in the fifth. Reds starter Brandon Finnegan, who hasn’t played since 2017 because of two shoulder injuries, gave up three runs, two hits and two walks in one inning.

Ryan Rolison, a first-round pick in the 2018 amateur draft, gave up one run, one hit and three walks in three innings. Garrett Hampson hit a three-run homer and Connor Joe had a three-run double in the seven-run fourth inning. Padres starter Dinelson Lamet allowed one run and two hits in 1 1/3 innings. Pedro Florimón homered.