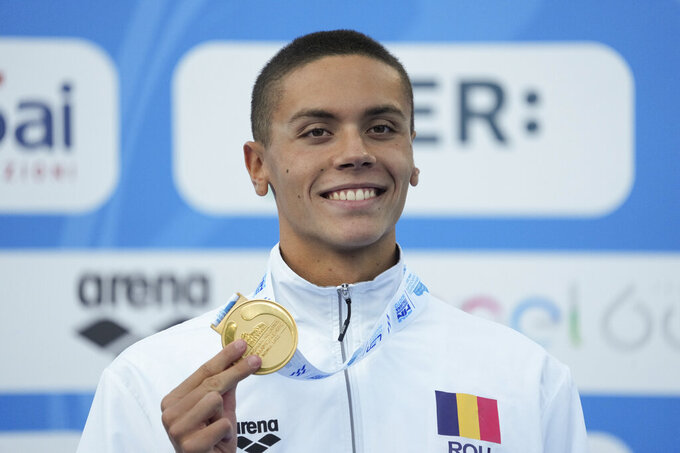 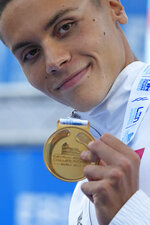 ROME (AP) — Seventeen-year-old David Popovici of Romania became the youngest swimmer to break the world swimming record in the men's 100-meter freestyle Saturday, beating the mark set more than 13 years ago in the same pool.

Popovici touched in 46.86 seconds at the European championships to top the time of 46.91 set by Brazil's César Cielo at the 2009 world championships, which also were held at Rome's historic Foro Italico.

Cielo established his record on July 30, 2009, at the last major international meet to allow rubberized suits. It stood longer than any record in the event's history, going back to 1905.

Now, it belongs to one of the sport's budding stars.

“There was no rush and I had to be extremely patient about the world record," Popovici said. "It has hurt but it’s always worth it and I feel fine right now. It felt great and it’s very special to break this record which was set here in 2009 by César Cielo.”

Cielo still holds the record in the 50 free, which is among eight men's long-course standards that remain from the rubber-suit era. Five of those were set at those supercharged 2009 worlds.

Popovici went out in 22.74 and set the record by going 24.12 on the return lap to easily beat Hungarian butterfly specialist Kristóf Milák by 0.61. Italy’s Alessandro Miressi claimed the bronze in 47.63.

“This was a brilliant race, a joy to swim next to David," Milák said. “David is a fantastic swimmer, I think the same crazy genius of the freestyle that I am in the butterfly. It’s great that his name will hit the headlines for long, long years.”

Popovici's emergence sets up a potentially huge showdown at the 2024 Paris Olympics, where American star Caeleb Dressel — winner of five gold medals at last summer's Tokyo Games — will come in as the reigning gold medalist in the 100 free.

Popovic had his coming-out at this year's worlds in Budapest, sweeping golds in the 100 and 200 free. He didn't get a chance to swim the 100 against Dressel, who dropped out of the event for health reasons before the final.

Milák, world record-holder in the 200 fly, hopes to also be part of the freestyle mix in Paris.

“My goal is very clear,” the Hungarian said. "I just want to reach a level in this event to arrive to Paris 2024 with the capability of swimming a time somewhere very close to 47 seconds.”