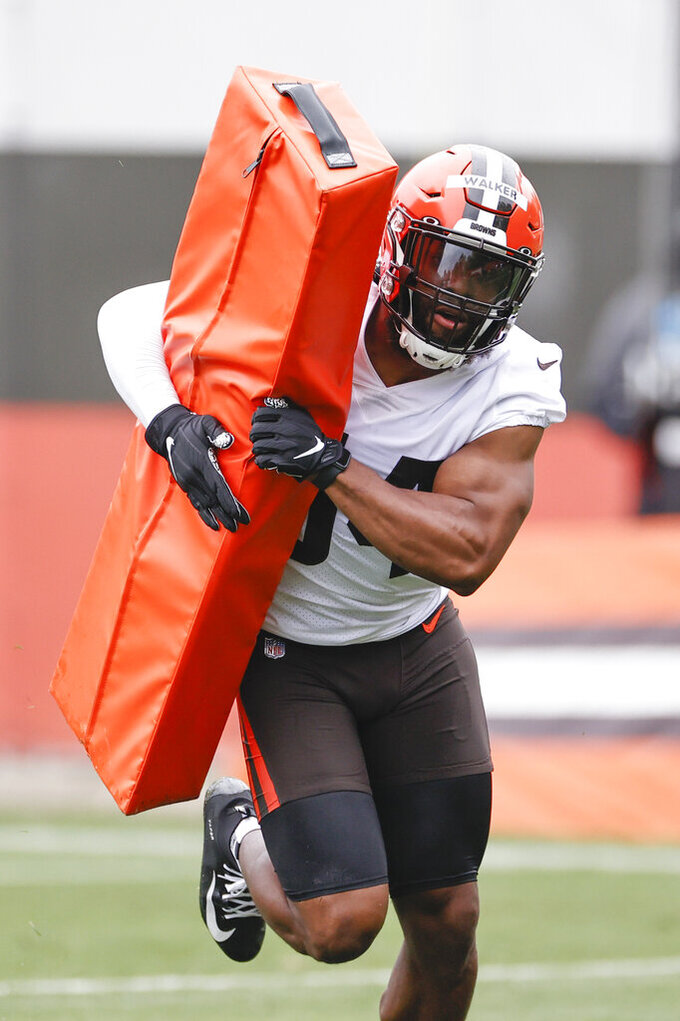 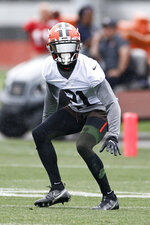 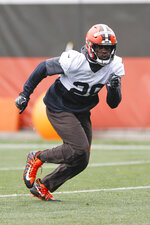 BEREA, Ohio (AP) — Myles Garrett can dump all the quarterbacks he wants. His dunking days are over.

The Browns' All-Pro defensive end, who recently posted videos on Twitter and Instagram of him dominating on the basketball court, has put his hoops game on hold.

“I feel like it’s more of a Jordan retirement,” Garrett said. “He went to baseball for a second. I went to basketball for a second, now I have to go back to what I’m good at, what I usually do, playing football, rushing the passer, stopping the run.

“Next season, you never know. I might go back to basketball, I might go play baseball, see if I can get on a team. There’s more on the horizon, but right now I have to get back to what my main focus is.”

While Garrett was kidding around, Browns coach Kevin Stefanski seemed much more serious when asked about his star player's basketball skills.

“He retired,” Stefanski said. “Great career for Myles, really proud of him. But he's done.”

Stefanski was then asked if he had to talk with Garrett about hanging up his sneakers.

Garrett's basketball jones began in February when he posted a video playing in a pickup game and included a message to Dallas Mavericks owner Mark Cuban, asking if he needed a “big guard.” Garrett recently tweeted a video of him dribbling behind the back and dunking over two defenders.

The idea of Garrett risking injury while playing basketball was unsettling to the Browns. They signed him to a five-year, $100 million contract extension last year and have Super Bowl aspirations this season.

During a Zoom conference call, Garrett, who suffers from asthma, said he's fully recovered after getting COVID-19 and missing two games last season.

He returned but struggled over the final five regular-season and two playoff games with his conditioning.

“I feel great,” he said. “I feel the best that I have since last year before COVID. It’s a wonderful feeling. I feel like it was kind of a long road and now that I’m back I’m feeling well-conditioned and feeling back at my peak.”

Garrett finished with 12 sacks, but only had 2 1/2 in his final five games. He said his illness may have prevented him from accomplishing his goal of being selected NFL Defensive Player of the Year.

“Sure did. It hurt, too,” Garrett said. ”I didn’t feel like I was getting off the ball. Athletically, I felt like I had it. Conditioning-wise, I felt like I was like 50 percent. I don’t think I’ve ever had to use oxygen so frequently so early into a game. ... I was honestly emptying the tank. I don’t think I’ve ever felt like that. To not feel like that, it’s great. I’m glad I’ve recovered."

Cleveland's organized team activities (OTAs) are voluntary, but Garrett was one of several veterans on the team's revamped defense to attend. The Browns may be lagging in attendance this spring compared to other teams such as the Kansas City Chiefs, who had star quarterback Patrick Mahomes at their workouts.

The Browns will open next season against the Chiefs in a rematch of their division round playoff game.

Garrett said he's not worried about the Browns falling behind one of the AFC's best teams.

“Not at all,” he said. “I’m glad they have attendance, but just because they’re getting work at their facility doesn’t mean we’re not working just because we’re away. Our guys are working on their craft. We have that freedom and liberty.

"When we get to Game 1, we’ll see who has been jelling better and who has the upper hand.”

NOTES: LB Anthony Walker, who signed as a free agent this winter after four seasons with the Colts, has been impressed with Garrett. “Freak of nature, honestly,” he said. "Huge human being. Probably the most flexible big guy I have ever seen as far as the stuff that I have seen him do in the weight room. ... He's as advertised. I am much happier to be his teammate than him sacking my quarterback in the end zone last year.” ... Stefanski downplayed the absence of QB Baker Mayfield and some of the team's other top players. “We are not taking attendance every day and saying who is here and who is not here,” he said. ... S Grant Delpit (Achilles), CB Greedy Williams (shoulder) rookie LB Tony Fields (foot) and WR/KR Jojo Natson (knee surgery) were on the field but did not participate in the workout.