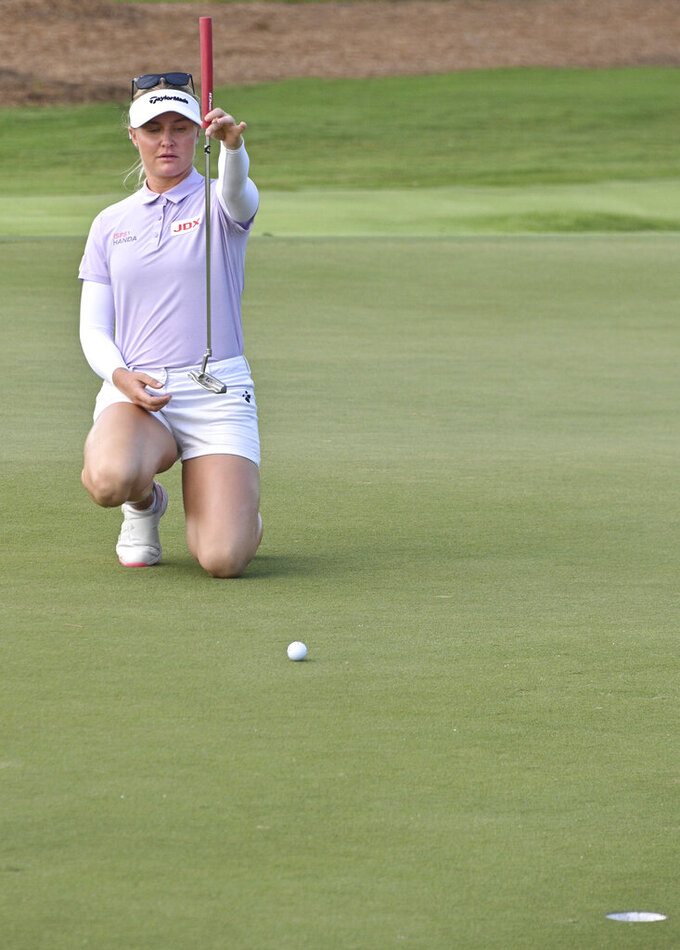 Charley Hull lines up on the 10th green during Round 1 of 2021 KPMG Women's PGA Championship at Atlanta Athletic Club in Johns Creek, Ga., Thursday, June 24, 2021. (Hyosub Shin/Atlanta Journal-Constitution via AP) 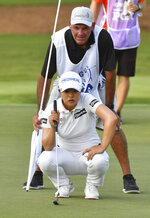 JOHNS CREEK, Ga. (AP) — Lizette Salas was in her happy place Thursday, and not just because she kept bogeys off her card at tough Atlanta Athletic Club and posted a 5-under 67 for a one-shot lead in the KPMG Women's PGA Championship.

Her game is rounding into form as the Solheim Cup approaches. That's a big deal to her, too.

But the broad smile went well beyond golf.

The COVID-19 pandemic took its toll on the 31-year-old Californian, dulling her usual spark and creating anxiety that she initially mistook for nerves.

“I really didn't like myself in 2020, and I think with the whole COVID and not being able to work and have golf as my outlet, that really hit hard,” Salas said.

She had never talked about it publicly until Thursday, confident that the worst is behind her. She never spoke about it to her parents or coaches or support team. A Mexican-American with a hardscrabble road to the LPGA Tour, she attributes her stubbornness to talk about such matters to her Hispanic background.

“It was hard for me to even speak about it just because I felt like other people are going through the same thing. Why do I need to feel sorry for myself?” she said. “Over time, it accumulated and got worse, and when I finally got out here, it was just ... so bad that the golf couldn’t help.”

One round wasn't going to solve everything, and Salas saw enough of the Atlanta Athletic Club to realize it won't be smooth sailing all week.

She led by one shot over Charley Hull of England, who had a 68 for the best score in the afternoon. What makes Hull happy is she's going home on Monday after a month on the road, which preceded a seven-week stretch playing the LPGA Tour schedule.

Jessica Korda and former U.S. Women's Open champion Jeongeun Lee6 were in a group at 69, among nine players who managed to post scores in the 60s.

Nelly Korda, who last week became the first two-time winner on this LPGA Tour season of parity, was at 70 along with a trio of major champions, including ANA Inspiration winner Patty Tavatanakit, who started with three birdies in five holes and closed with a pair of birdies.

Inbee Park, the seven-time major champion and Olympic gold medalist, played better than her score of 71, all because of one hole.

She had mud on her ball from rain earlier in the week, and it hooked some 50 yards left on the par-4 eighth hole, down an embankment and into the water. After a drop in deep rough to a short-sided pin, she conservatively went long to keep it rolling back down the hill, and she three-putted for triple bogey from some 70 feet.

“I played really, really good out there today, except for one mud ball,” Park said.

Defending champion Sei Young Kim had a 76, while Michelle Wie West was at 77.

Salas had no such issues. She finished with a tough par putt, had no complaints with any part of her game and make a nervy par putt at the end to keep a clean card.

Salas spoke on days getting darker before it got light, and turning point was a month ago at the Pure Silk Championship at Kingsmill, site of her lone LPGA Tour victory in 2014. Her caddie from that win, John Killeen, is back on the bag. There were positive memories, good vibes.

“That just lit a spark in me,” Salas said.

She ended 18 straight tournaments of pedestrian play with a tie for fifth, added another top 10 last week in Michigan and is trending.

“I had to take care of my mental health, and that’s something that a lot of people don’t really take into consideration,” she said. "I think for me coming from a Hispanic background, it’s very hard to talk about that, but I’m very fortunate to have a team that was willing to bend over backwards to help me and to get me to where I am right now.

“I just understand myself more, and I’m at a point where I like myself again, even when days aren’t as good as others. It’s been a quite a roller coaster of emotions,” she added. “Here I am, and I'm playing much better. Just happy to be here.”

Salas spent her time during the pandemic staying off her phone and reading more books, which helped her to slow down life, decompress and get more sleep.

One of them was titled, “I'm Not Your Perfect Mexican Daughter,” which she felt like an autobiography. She also read a book about Mexican painter Frida Kalo.

“And when you look back at her history, she did things her way and enjoyed her own process,” Salas said. “So I’ve just been highlighting a few things here and there. It really ... it puts me to sleep. It’s a win-win.”

And then she burst into a big smile, which had been missing for too long.