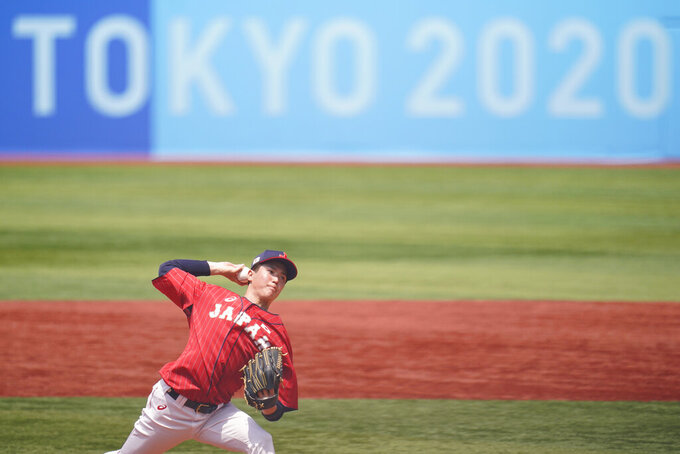 YOKOHAMA, Japan (AP) — Mike Scioscia is one win from matching mentor Tommy Lasorda, the only manager to lead the United States to a baseball gold medal.

Host Japan, which stopped its major league season during the Tokyo Olympics, is the favorite in Saturday's gold medal game (6 a.m. EDT).

Scioscia's team, a mixture of prospects mostly from Double-A, career minor leaguers and released veterans, overcame a blown ninth-inning lead in a 7-6, 10-inning loss to Japan to reach the final by beating the Dominican Republic 3-1 and South Korea 7-2.

“I think you can look at a lot of the negative things that maybe aren't happening as far as COVID; obviously we're all concerned with that, not having any freedom, not having any fans in the stands, free to go watch some events," Scioscia said. "We can talk about some things in the negative, but the bottom line is, it says USA across our jersey and these guys are playing for a gold medal this weekend. Doesn’t get any better that.”

Nick Martinez starts for the U.S. The 31-year-old right-hander pitched for Texas from 2014-17, then spent three seasons with the Pacific League's Hokkaido Nippon-Ham Fighters before switching this season to the Fukuoka SoftBank Hawks.

Martinez got the opening-round win over South Korea, allowing one run and four hits in five innings with nine strikeouts. He is familiar with Yokohama Stadium from his time in Japan.

“Playing at this field definitely helps,” he said. “I feel comfortable.”

Masato Morishita, a 23-year-old right-hander with the Central League's Hiroshima Toyo Carp, starts for Japan. He allowed two runs and five hits over five innings in Tuesday's victory over Mexico.

Japan (5-0), seeking its first baseball gold medal, is batting .288, second to South Korea’s .294. The U.S. (4-1) is third at .247 with a tournament-high seven home runs — including three by Boston prospect Triston Casas. American batters have struck out 50 times, far more than the 36 for contact-focused Japan.

Jamie Westbrook, a 26-year-old left fielder, hit a long home run against South Korea for his first RBI and is hitting .389.

An All-Star in the Double-A Southern League in 2018 and 2019, he left the Arizona Diamondbacks organization to sign with San Francisco for the 2020 season. Then, when Major League Baseball canceled its minor league season because of the coronavirus pandemic, he signed with the Sugar Land Lightning Sloths of the independent Constellation Energy League and wasn't sure whether he'd have a future in affiliated baseball.

He started this season at Milwaukee's Triple-A Nashville, was demoted to Double-A Biloxi, then returned to Nashville in June. He called it “a whirlwind of emotion.”

“COVID kind of messed things up for a lot of minor leaguers,” he said. “I found myself in indy ball, a spot most people don't want to be, and I really found myself. I got back into the infield, and it was a chance for me to better myself. ... I started having fun, just like travel ball when you're growing up.”

Lasorda, who died in January at age 93, was Scioscia's manager with the Los Angeles Dodgers from 1980-92 and led the U.S. to the 2000 gold medal in Sydney. Ben Sheets pitched a three-hit complete game in a 4-0 win in the final, stopping Cuba's 21-game Olympic winning streak. Mike Neill hit a first-inning homer, Pat Borders an RBI double and Ernie Young a two-run, bases-loaded single.

Scioscia say managing in the Olympics is more akin to the final day of the regular season with a postseason berth at stake or a wild-card playoff, dissimilar to a five- or seven-game postseason series.

“This whole tournament is as intense as anything I’ve been part of in 19 years of managing with the Angels or playing in I don't know how many playoff games with the Dodgers,” he said.

“There’s an intensity here. There’s a focus. And I’m proud of these guys for playing so well under circumstances, of, hey, you have to win. And I hope it moves their career forward and I hope they go out there and they can play at the level to put a gold medal around their necks.”