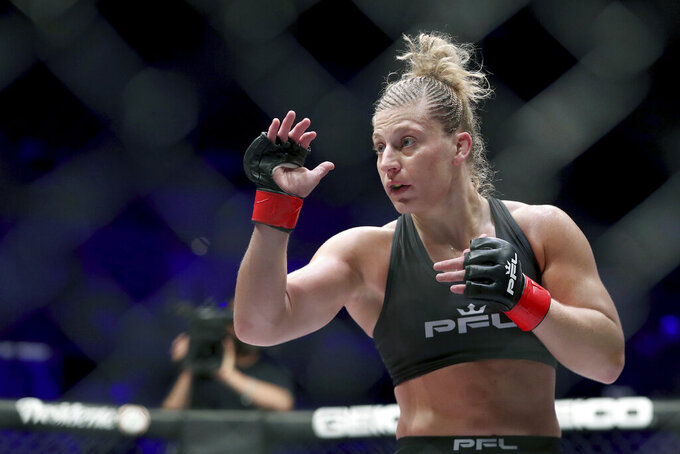 Undefeated MMA fighter and two-time Olympic gold medalist Kayla Harrison is headed back to the PFL.

The 31-year-old Harrison had been courted by MMA promotions Bellator and UFC, and the prospect of better fights against stiffer competition enticed her to consider jumping ship. Harrison is 12-0 over her professional career, with her lone fight outside the PFL banner in 2020 when the promotion took a year off because of the coronavirus pandemic.

Harrison eyed a fight with Bellator’s Cris “Cyborg” Justino and hoped there was some way the fight would happen in 2022.

“It’s been a long, kind of bumpy, roller coaster ride to get to here,” she said. “I’m happy with the PFL. I believe in the format, I believe in the company, I believe what they’re trying to do. They’re paying me a hell of a lot of money.”

Harrison told The Associated Press she did receive a contract offer from another MMA company and PFL matched the deal.

“I received an offer to go and fight Cyborg and so that’s kind of what I had planned to do,” she said.

She said it was an issue with “timing” that didn't fit with UFC.

Harrison said PFL chairman Donn Davis was “all about making that fight happen and bringing her over here.”

Unlike most combat sports promotions, the PFL competes in a season-long format that includes playoffs and championship fights. The PFL world championship had six fighters earn $6 million in prize money, and the league has seemingly morphed into the No. 2 MMA promotion behind UFC. The MMA league recently announced a multiyear deal and an expanded platform with ESPN.

The PFL also planned to launch its first pay-per-view this year — and surely a card headlined by Harrison is a big piece of that draw.

Harrison’s first opponent in 2022 will be announced in the coming weeks, along with the entire PFL regular season schedule. PFL CEO Peter Murray also announced a PPV Super Fight Division. Murray said the new PPV would be “where star MMA fighters will compete on a global stage against the best fighters in the sport.” He said Harrison would be part of the “Super Fight” division

Harrison was a two-time judo Olympic gold medalist. No U.S. judoka — man or woman — had won an Olympic gold medal before Harrison beat Britain’s Gemma Gibbons in the women’s 78-kilogram-and-under division at the 2012 London Olympics. She won gold again four years later at the Rio de Janeiro Games and made her MMA debut in 2018.

She’s finished seven opponents in the first round and only once went more than three rounds. Harrison will continue to fight at 155 pounds.

She’s relieved to have a professionally “stressful process” behind her.

“It was just a chaotic couple of months of receiving offers, getting better offers, thinking we were good with the PFL and then a last-minute offer comes in,” she said. “I’m just excited to fight again.”