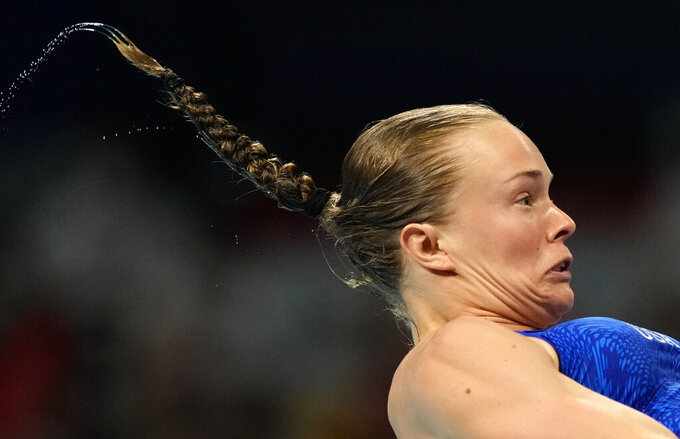 TOKYO (AP) — Hearing the start of her introduction, Chinese diver Shi Tingmao put one foot on the top spot of the podium. She sheepishly stepped back down and waited for the announcer to finish.

It was the only mistake she made all day.

Once on the podium, a smiling Shi raised both arms in triumph.

“I’ve waited so long for this moment,” Shi said through a translator. “There were a lot of expectations. I feel satisfied.”

Shi added the individual 3-meter title to the springboard synchro gold she earlier won with Wang Han, successfully defending both of her titles from five years ago in Rio de Janeiro.

The Chinese have won four of the first five diving events. They took silver in men’s 10-meter platform synchro.

“They’re so consistent,” bronze medalist Krysta Palmer of the United States said. “They have a lot of pressure, but I think they handle it pretty well.”

Shi earned her highest score of 78.00 points on her last dive, a forward 2 1/2 somersaults with one twist pike. She knifed through the water with barely a splash. After climbing out of the pool, Shi buried her face in her yellow chamois, hiding her tears.

“One year ago I was not doing that well,” Shi said. “I’m very thankful that I didn’t give up.”

Since arriving in Tokyo, Shi had struggled with the food and cardboard beds at the athletes village. The diver, who turns 30 at the end of the month, felt pressure to defend her titles.

“My age has never been the biggest problem,” she said. “Whether I want it or don’t want it, that’s the most important thing. My original goal of wanting the gold medal has never changed."

Shi enjoyed herself behind the scenes, posing for photos with her gold medal and four fingers held up, signaling her career medal total.

Palmer finished with 343.75 points. She's the first American medalist in 3-meter since Kelly McCormick won the same color medal at the 1988 Seoul Olympics.

It's also the first individual medal won by the United States since Laura Wilkinson's platform gold at the 2000 Sydney Games.

Palmer's last dive — a forward 2 1/2 somersaults with two twists pike — tied for the highest degree of difficulty in the final. Even the Chinese didn't have any dives that tough.

She danced while listening to Lady Gaga and Rihanna on her headphones in between dives.

“I wanted to come in as relaxed as possible,” she said. “I was just relieved that I made it to the finals. Everything else was a bonus for me.”