Shiffrin responds to those 'who have so much apparent hate' 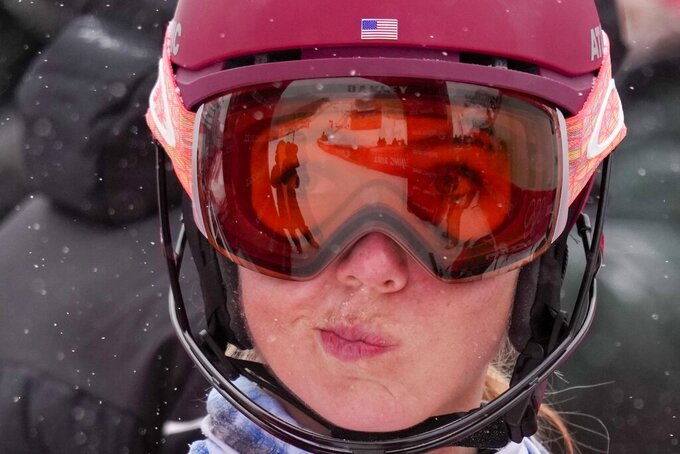 Mikaela Shiffrin, of the United States, gestures after falling in the women's combine slalom at the 2022 Winter Olympics, Thursday, Feb. 17, 2022, in the Yanqing district of Beijing. (AP Photo/Luca Bruno)

BEIJING (AP) — Not long after Mikaela Shiffrin skied off-course for the third time in five races at the Beijing Olympics, she wondered aloud to reporters about what sort of vitriol might be directed her way.

“There’s going to be a whole chaotic mess ... that people are saying about how I just fantastically failed these last couple weeks in the moments that actually counted,” the two-time gold medalist at other Winter Games said after failing to finish the slalom run of the two-leg Alpine combined on Thursday. “It’s really strange, but I’m not even afraid of that right now. Maybe that’s because I have zero emotional energy to give anymore.”

Hours later, the 26-year-old American went on Twitter to post what seemed to be a series of comments she might have seen on social media in reaction to Thursday’s fall, which followed similar mistakes in the giant slalom and slalom last week.

Some examples of what she included: “Choker,” “Can’t handle the pressure,” “Arrogant.”

Shiffrin followed that up with a tweet referring to “the people who have so much apparent hate.”

Shiffrin arrived in Beijing as one of the biggest stars of the Winter Olympics.

She won the slalom at the 2014 Sochi Olympics at age 18, then added a gold in the giant slalom and a silver in the combined at the 2018 Pyeongchang Olympics.

“Pressure is a tough thing and expectation’s a tough thing, and that comes with the territory of being one of the greatest in the sport, ever,” U.S. ski team head women’s coach Paul Kristofic said. “She feels that and it weighs on her.”

The best Shiffrin did at the 2022 Games was a ninth-place finish in the super-G and 18th in the downhill.

Her “Did Not Finish” result in the giant slalom was her first in that event in more than four years, a streak of 30 races, and was followed by “DNFs” in the slalom and combined.

While all of the individual ski races are done, Shiffrin does plan to enter a sixth contest Saturday: a team event that was added to the Olympics four years ago and closes the Alpine schedule.

Her second tweet ended with a mention of some of her U.S. teammates, such as Paula Moltzan and River Radamus, and ended with this: “If you are playing the side of hater today, ignore me but definitely look out for them!”