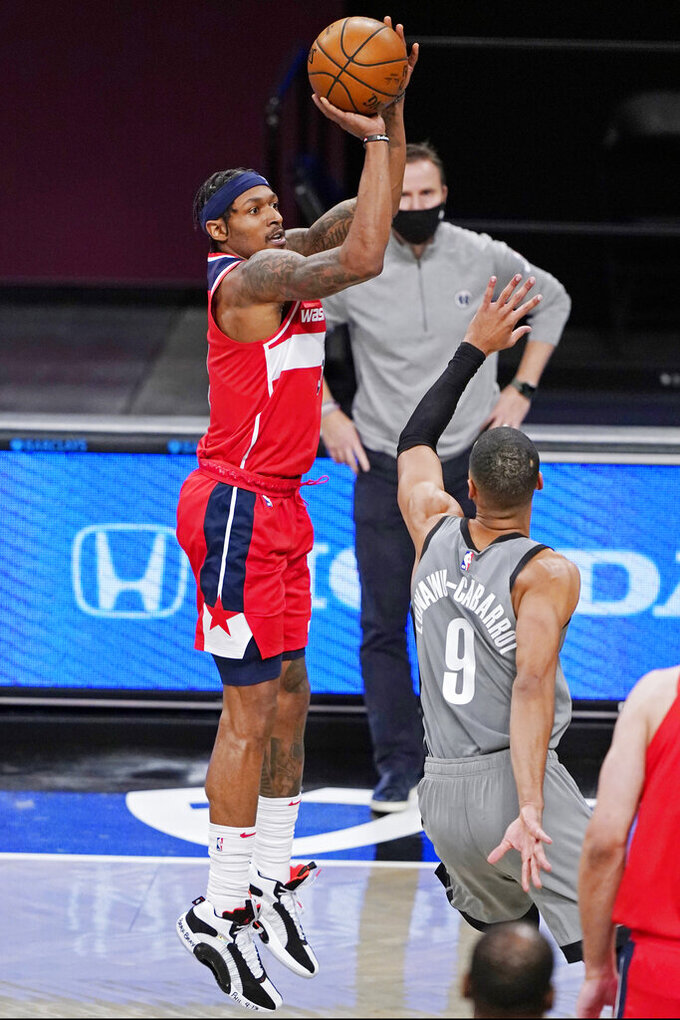 WASHINGTON (AP) — This, then, is where things stand for the Wizards, with a half-dozen players positive for COVID-19, others injured and a gap of at least 13 days between games: 6-foot-3 shooting guard Bradley Beal was stuck trying to defend 7-footer Robin Lopez in practice.

At least Washington is back at practice, no small step in the right direction for a club dealing with so much uncertainty amid the coronavirus pandemic.

“It’s a bit odd. Pausing our season for a little bit while everybody else plays. ... It feels almost like an unscheduled All-Star break or sort of like an extra All-Star break. Except everybody else is playing,” Lopez said Thursday after nine players were able to participate in practice for a second day in a row after going nine days with no in-person work. “We’re just trying to keep everybody engaged right now.”

Even the first two sessions back together were far from ideal. Coach Scott Brooks described some of what the Wizards did as “5-on-zero offense,” because there weren't enough players to have two sides of five apiece.

“Our mindset today is a lot better," Brooks said Thursday, when Lopez was the only healthy center available. "I’m excited about it now. Last night I wasn’t in the best place. I don’t get there often. But today, seeing the guys coming back — we had a good practice today with the guys we had.”

The Wizards started this season 0-5 and now are 3-8; they haven't played at all since a victory against Phoenix on Jan. 11. Their past six games were scrapped, including what was supposed to be a trip to face the Milwaukee Bucks on Friday.

But after Beal, who leads the NBA in scoring at 34.9 points per game, complained about needing to play in Milwaukee, the league acknowledged Washington was too short-handed and too short on preparation.

All of the time off, Beal said, "alters guys’ rhythm, shape; that's just like a recipe for injury, honestly.”

The earliest Washington will play now is Sunday at the San Antonio Spurs.

In addition to six positive COVID-19 tests, three other players were sidelined after contact tracing determined they might have been exposed to the illness. Plus, starting center Thomas Bryant is done for the season with a left knee injury and point guard Russell Westbrook is still dealing with a left quadriceps injury.

“Not a lot of bodies. It's going to be a juggling act with minutes,” Brooks said. “And you hope that nobody gets in foul trouble.”

Brooks said he doesn't know whether Westbrook can play Sunday.

Both Brooks and Lopez said they expect the league to figure out a way to have Washington play its entire 72-game schedule eventually.

And neither thinks there is a danger of any member of the Wizards writing off the season, despite how bleak things are.

“That doesn’t even cross my mind with this group,” said Brooks, who is in the final season of a five-year, $35 million contract. “We know that we’ve got some tough luck this season.”