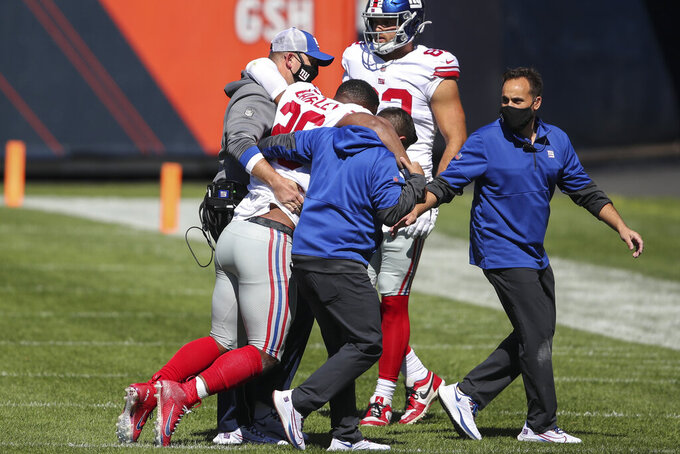 FILE - In this Sept. 20, 2020, file photo, New York Giants running back Saquon Barkley is helped off the field after being injured during the first half of the team's NFL football game against the Chicago Bears in Chicago. Barkley's season lasted just six quarters as he tore the ACL in his right knee against Chicago and had the meniscus repaired, too. (AP Photo/Kamil Krzaczynski, File)

The NFL could put together a talent-packed all-star team of players who missed most or all of this season because of significant injuries or coronavirus opt-outs.

From Dak Prescott to Christian McCaffrey to Saquon Barkley to Odell Beckham Jr., this All-Absent Team has enough star power and playmakers that it might beat some actual NFL squads — the Jets and Jaguars? — right now.

Bad shoulders, knees and all.

Here's a position-by-position look at this year's star-studded squad, which includes players who have participated in half of their team's games or less this season — while also likely ruining some fantasy owners' fortunes in the process:

— Dak Prescott, Cowboys. He was off to a fast start, becoming the first player in NFL history to pass for at least 450 yards in three straight games. But he suffered a compound fracture and dislocated right ankle in Week 5 against the Giants and missed the rest of the season. Prescott signed a $31.4 million franchise tag before the season, and the Cowboys can do so again this offseason if they don't agree to a long-term deal.

— Jimmy Garoppolo, 49ers. A year ago, Jimmy G was leading San Francisco on a Super Bowl run. Now, there are questions about his future with the 49ers. Garoppolo played just six games because of two high ankle sprains, and wasn't playing particularly well when he was healthy. He's scheduled to count $26.9 million against San Francisco's salary cap next season and $27 million in 2022.

— Christian McCaffrey, Panthers. The 2019 All-Pro was a popular No. 1 overall pick among fantasy owners, and for good reason. He was the third player to have 1,000 yards rushing and receiving in the same season and it earned him a four-year, $64 million contract extension that made him the highest-paid running back in NFL history. But he was limited to six games, first because of a high ankle sprain, then a shoulder sprain and then a hip ailment.

— Saquon Barkley, Giants. His season lasted just six quarters as he tore the ACL in his right knee in Week 2 against Chicago and had the meniscus repaired, too. His loss was a big blow to first-year coach Joe Judge and quarterback Daniel Jones — and those who drafted him high in their fantasy leagues.

— Joe Mixon, Bengals. Cincinnati was excited about teaming the running back with No. 1 overall pick Joe Burrow. But both got hurt and ended the season on IR. Mixon played only six games because of a foot injury.

— Odell Beckham Jr., Browns. Cleveland has a chance to reach the playoffs for the first time since 2002, and could do it without one of the league's most dynamic receivers. Beckham played in only seven games before a torn ACL put him on the sideline for the rest of the season.

— Julian Edelman, Patriots. The 2019 Super Bowl MVP had 13 catches for 236 yards in his first two games before slowing considerably with just eight receptions in his next four games. Edelman was placed on IR with a knee injury on Oct. 31 and won't be back this season — and maybe not again for New England. The 34-year-old receiver could be an offseason cap casualty.

— Courtland Sutton, Broncos. He had a breakout second season last year with 72 receptions for 1,112 yards and six touchdowns. But Sutton missed the season opener with a shoulder injury, returned in Week 2 and had three catches before tearing an ACL.

— George Kittle, 49ers. He returned last week and had four catches for 92 yards after missing six games with a broken foot. He also sat out the first two games with a knee injury, so it has been a bit of a lost season for the league's highest-paid tight end.

— Laurent Duvernay-Tardif, guard, Chiefs. The first NFL player to opt out for the season because of the coronavirus pandemic. Coming off a Super Bowl win, Duvernay-Tardiff — who has a doctorate in medicine — worked at a long-term care facility during the pandemic.

— Larry Warford, guard, Free Agent. He was one of the most sought-after offensive linemen after being released by New Orleans in the offseason, but decided instead to opt out over COVID-19 concerns.

— Tyron Smith, offensive tackle, Cowboys. The two-time All-Pro and seven-time Pro Bowl pick played in only two games before having season-ending surgery on his neck.

— Nate Solder, offensive tackle, Giants. Another O-lineman who opted out due to family concerns over the coronavirus pandemic.

— Taylor Lewan, offensive tackle, Titans. The three-time Pro Bowl selection was lost for the season when he tore an ACL in Week 6.

— Nick Bosa, 49ers. Last season's AP Defensive Rookie of the Year played in only three games before tearing his ACL and being sidelined for the rest of the season. Linemate Solomon Thomas also was lost for the season with the same injury, two plays after Bosa was hurt in Week 3.

— Jadeveon Clowney, Titans. Where he'd end up was an ongoing storyline throughout the offseason and training camp before he finally signed with Tennessee right before the season. He played just eight games because of a knee injury with no sacks, and will be a free agent again this offseason.

— Danielle Hunter, Vikings. One of the league's most consistently productive pass rushers — he had 48 1/2 sacks the last four seasons — missed all of this year after having surgery to repair a herniated disk in his neck before the opener.

— Jurrell Casey, Broncos. His first season in Denver after nine in Tennessee was limited to three games because of a torn biceps.

— Josh Allen, Jaguars. An impressive rookie season was capped by a Pro Bowl appearance. But his second season ended after just eight games — and only 2 1/2 sacks — because of a knee injury.

— Von Miller, Broncos. The three-time All-Pro dealt with COVID-19 in the offseason, then dislocated an ankle tendon a week before the opener and has missed the entire season. His 10-year run in Denver could be over, too, since the Broncos could save $18 million on the cap by releasing him.

— C.J. Mosley, Jets. The middle linebacker opted out of this season, citing family concerns about the coronavirus. Since signing a five-year, $85 million deal with New York in March 2019, Mosley has played in just two games.

— Dont’a Hightower, Patriots. Like Mosley, Hightower was an opt-out for the season, and New England's defense sorely missed him.

— Chandler Jones, Cardinals. After a career-high 19 sacks last season, Jones had just one in five games before suffering a torn biceps.

— Richard Sherman, 49ers. The three-time All-Pro missed nine games after injuring his calf in the season opener, and played in four more games before dealing with calf soreness that will keep him out of the final two games. He's due to become a free agent in the offseason.

— Trae Waynes, Bengals. He signed a three-year, $42 million contract with Cincinnati, but tore a pectoral muscle early in training camp and missed the entire season.

— Earl Thomas, Free Agent. The three-time All-Pro and seven-time Pro Bowl selection hasn't played this season after being released by Baltimore in training camp for behavior that “adversely affected” the team — including punching then-teammate Chuck Clark during practice.

— Patrick Chung, Patriots. One of Bill Belichick's most consistent and productive performers on defense was one of New England's NFL-high eight players to opt out for the season because of the pandemic.

— Josh Lambo, Jaguars. He injured his hip in Week 2 and missed five games before returning in October. Lambo kicked a career-best 59-yard field goal, tying the Jacksonville record, but later re-injured his hip on an onside kick attempt and was lost for the season.

— Adam Vinatieri, Free Agent. Sure, the NFL’s all-time leading scorer with 2,673 points is 48 and had his lowest field-goal percentage of his career (68%) last year with Indianapolis, but it seemed as though he'd kick forever.