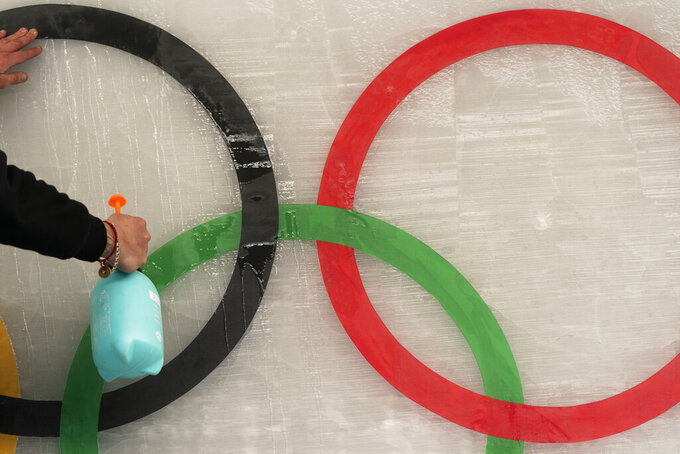 An ice maker sprays water over a cutout of the Olympic rings while installing a sub-glacial Beijing 2022 logo on the track at the Yanqing National Sliding Center ahead of the 2022 Winter Olympics, Friday, Jan. 28, 2022, in the Yanqing district of Beijing. (AP Photo/Jae C. Hong)

BEIJING (AP) — A snowboarder from Slovenia has tested positive for the coronavirus after landing in Beijing for the Olympics, the country’s national Olympic committee said Friday.

Žan Košir, who had been chosen as one of Slovenia’s flag bearers for next Friday’s opening ceremony, took a second test to confirm the result and is now in isolation.

“The Olympic team management followed the organizers’ instructions and the athlete is now isolated,” the Slovenian team said.

The team added Košir has no symptoms and is staying at a special hotel with a gym and the equipment necessary to keep training indoors.

The 37-year-old Košir will have to self-isolate until he tests negative twice.

Košir is one of Slovenia’s most successful Winter Olympians. He won a silver and a bronze medal at the 2014 Sochi Games and added another bronze four years ago at the Pyeongchang Olympics.

Officials in China say four athletes or team members have tested positive since Jan. 4, along with 137 others associated with the Olympics. It’s not clear if Košir and Centrih are among those numbers.