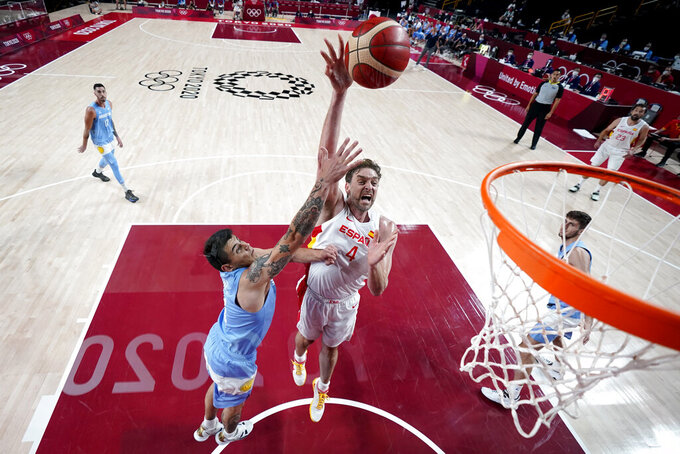 SAITAMA, Japan (AP) — Ricky Rubio scored 26 points and Spain remained unbeaten in the Olympics by beating Argentina 81-71 on Thursday in a rematch of the Basketball World Cup.

Sergio Llull added 10 for Spain, which improved to 2-0 and will face Luka Doncic and Slovenia on Sunday for the top spot from Group C.

Rubio was the MVP when Spain beat Argentina 95-75 two years ago in China to win its second world championship — with the first coming in this very Saitama Super Arena in 2006.

The Spanish might have another run at an Olympic medal in them after winning silvers in 2008 and 2012, and bronze in 2016.

Nicolas Laprovittola scored 27 points for Argentina, which fell to 0-2 after giving up 48 points to Doncic and lost 118-100 in its opener. Luis Scola added 13 and Facundo Campazzo had 10.

This game, featuring 41-year-olds Pau Gasol and Scola meeting again in their men's basketball record-tying fifth Olympics, was the latest matchup between nations that have been basketball's best outside of the U.S. over the last two decades.

Argentina got off a strong start and led 15-6 when Laprovittola made a 3-pointer. Rubio had 11 points in the first quarter but Spain trailed 25-20.

The Argentines still held a one-point lead after Scola made his only basket of the half, but Rudy Fernandez made a 3-pointer and Willy Hernangomez had the final four points to make it 40-34 at halftime.

Spain opened a 14-point lead on Gasol's three-point play in the final minute of the third. Argentina cut it to eight headed to the fourth but Spain quickly pulled away again, pushing it to 16 points midway through the period.

Fernandez is also in his fifth Olympics.