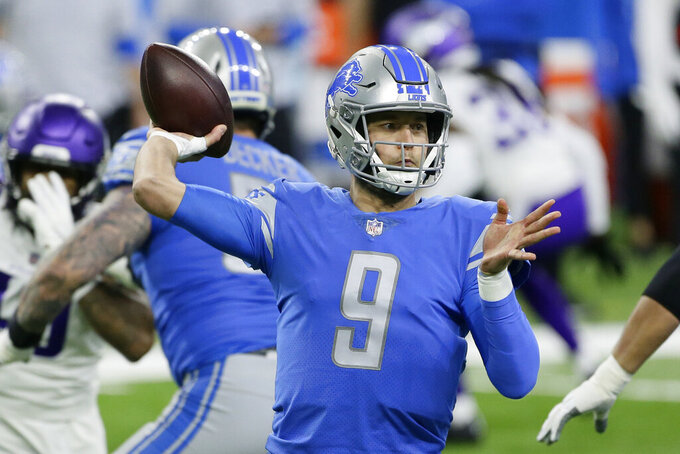 FILE - In this Jan. 3, 2021, file photo, Detroit Lions quarterback Matthew Stafford throws during the first half of an NFL football game against the Minnesota Vikings in Detroit. Stafford says his offseason thumb surgery is not an impediment to anything he wants to do during his first offseason workouts with the Los Angeles Rams. (AP Photo/Duane Burleson, File)

LOS ANGELES (AP) — Matthew Stafford says his offseason thumb surgery isn't an impediment to anything he wants to do during his first offseason workouts with the Los Angeles Rams.

Learning a new offense and getting to know every player in the Rams' locker room present more than enough challenges for the veteran passer, but he's confident he has enough time to get everything done.

And after the NFL missed out on most offseason team work last spring due to the coronavirus pandemic, Stafford is grateful he picked this year to switch teams.

“Selfishly, I’m liking these times,” Stafford said Monday in his first public comments since the start of the Rams’ offseason program. “It’s giving me the chance to be on the field and calling plays and going against our defense a little bit. Just above-the-neck stuff, being able to work the mental aspect of the game. So that part of it has been great for me. ... I feel like everybody is figuring out what works best for them as an organization, and I feel like we’ve accomplished that.”

After four months of offseason rest and several weeks of getting used to daily sunshine in his new home, Stafford believes he is settling in nicely with the Rams.

Stafford is also feeling healthier: He played through a torn ligament in his right thumb for the second half of last season with the Detroit Lions while throwing for 4,084 yards and 26 touchdowns. Stafford also injured his ribs, his left knee and his right ankle, yet still started all 16 games for the ninth time in 10 years.

He described his thumb surgery as “a little quick fix. I feel way better. I haven't really been limited at all since we've been together."

The Rams spent last week working on their physical conditioning and doing individual drills. As they begin to incorporate team drills ahead of their minicamp next month, Stafford will get daily opportunities to pick up the details and nuances necessary to ensure the Rams get what they sought when they traded two first-round picks and quarterback Jared Goff to the Lions for the 33-year-old veteran quarterback still searching for his first NFL playoff victory.

Stafford welcomes every day of these cram sessions during an offseason that he said is “all a brand-new experience.”

“The biggest thing at the quarterback position is just being able to get some of these mental reps,” Stafford added. “Being able to get in and out of the huddle, learning the new terminology, and then see our plays develop versus different defenses. I’m just trying to learn as much as I possibly can, not only about our playbook and how we want to operate, but also to know my teammates as well.”

Rams linebacker Leonard Floyd said Stafford's new teammates can already see what kind of a competitor they've got in charge of the offense for a team that racked up four consecutive winning seasons and three playoff berths under Goff.

“He's slinging the ball with great accuracy,” Floyd said. “He's a natural leader. He's just coming in, doing his job, and you can tell guys are buying into what he's doing already.”

Stafford also is getting to know coach Sean McVay, whose offense has regressed over the past two seasons. The Rams traded for Stafford, signed veteran receiver DeSean Jackson and drafted fellow speedster wideout Tutu Atwell in the past two months, making every move with a determination to return the offense to its most dangerous form from 2017 and 2018.

Stafford is pleased with his first interactions with Jackson and Atwell, and he's getting to know Robert Woods and Cooper Kupp, the Rams' top two receivers. But he can't fully prepare for the season without extensive interaction with McVay, who is creating a playbook designed to take advantage of his reconfigured offense's many strengths.

“I'm constantly learning things about him,” Stafford said of McVay. “He's obviously a high-energy guy. He loves the game. The biggest thing for me so far is I've got the same guy every single day. He demands a lot out of everybody, and he knows we demand the same out of each other.”