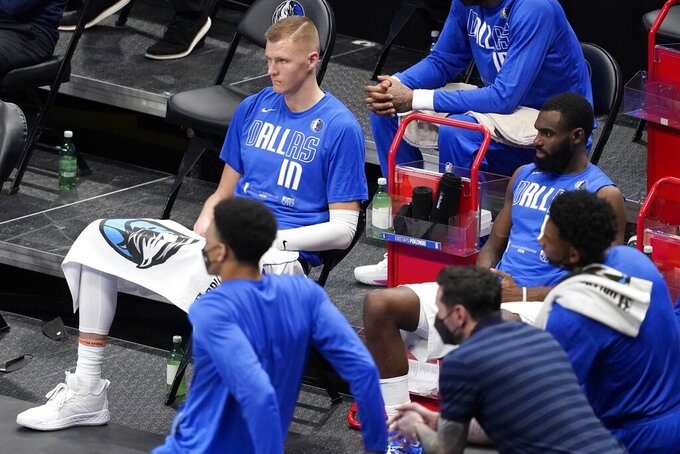 DALLAS (AP) — A little cat-and-mouse game between the coaches over the size of the lineups didn’t amount to much, as entertaining as it was early for another boisterous crowd in Dallas.

The big dogs of the Los Angeles Clippers were the difference on the road again, and their team is back in control of the first-round series.

Kawhi Leonard had 29 points and 10 rebounds, Paul George scored 20 points and the Clippers manhandled the Mavericks, winning 106-81 in Game 4 on Sunday night to keep the road team perfect in a Western Conference series now tied 2-2.

Reggie Jackson added 15 points, and the fourth-seeded Clippers are headed home for Game 5 on Wednesday night much more sure of themselves than when they left LA in a two-game hole.

“We’re where we were supposed to be,” said Nicolas Batum, who was at the center of the lineup swap as a smallish 6-foot-9 starter over 7-footer Ivica Zubac. “We’re supposed to be at 2-2, technically. So we’re going to go home and have to take care of home court.”

Luka Doncic started slowly after being listed as questionable because of a cervical strain, the diagnosis for the Dallas sensation after he said following Game 3 that he felt pain in his neck and down his left arm.

Playing with medical strips on his left shoulder, and wearing a large pad in that area when he wasn't playing, Doncic scored 19 points after averaging 38 in the first three games.

Grimacing at times and grabbing his neck at others, the 22-year-old star was 9 of 24 with series lows in rebounds and assists with six apiece.

“I don't think that matters right now,” Doncic said. “Injuries are a part of basketball. I was 100%. But I played terrible. Just got to move on to the next one.”

Coach Rick Carlisle disagreed, and said the best hope for Dallas was two full days between games for Doncic to get rest and treatment.

“He’s in pain,” Carlisle said. “It appeared to me he couldn't turn left, couldn't look to his left, couldn't turn his neck to the left. That's difficult for a guy that relies on peripheral vision and basically has played his whole life with his head on a swivel. His neck issue certainly contributed to a 9-for-24 night and him having some real unusual struggles.”

The Mavericks came home filled with hope of ending a 10-year run without a playoff series victory since the franchise won its first championship, knowing the number of fans was about to more than triple with loosened COVID-19 restrictions.

Instead, a pair of crowds exceeding 17,000 didn't get much after a huge jolt of energy in Game 3 carried the Mavericks to a 19-point lead in the first quarter before Leonard and George took over.

The LA superstars didn't give fans much of a chance to get into Game 4, beyond the early gamesmanship between the coaches.

After a smaller lineup turned Game 3 in LA's favor, Lue chose that approach from the beginning in going with Batum.

“His mindset is great,” Lue said. “I thought he did a great job on Luka getting up the floor, trying to deny him the basketball, pressure him a bit. Nico starting allowed us to do more defensively, switch more.”

Marcus Morris didn't even jump against Kristaps Porzingis on the opening tip, and the 7-3 Latvian scored the first two Dallas baskets on post-up jumpers. Porzingis finished with 18 points.

With Zubac still sitting midway through the first quarter, Carlisle replaced Porzingis with the 7-4 Boban Marjanovich, a fan favorite who hadn't even played in the series before that.

The big Serbian got a huge ovation and the crowd went even crazier when he had the next two Dallas baskets. Zubac's first appearance came shortly thereafter.

Neither of those answers lasted long, and the Mavericks never found solutions for Leonard and George.

Leonard, who is averaging 33 points in the series, got to the rim when he wanted to and was efficient from 3-point range, making two of three. He was 11 of 15 overall, and made 24 of 32 shots in the two games in Dallas.

“The pace and the speed he’s playing with is what we need,” Lue said. “It’s unbelievable.”

George did his damage in the first half of both games in Dallas, the first helping LA recover from the hot Dallas start. This time, he had 18 points before the break to help the Clippers to a 61-35 lead. The margin surpassed 20 for the first time on an 8-0 run to start the second half.

“They’ve got two great players that are just putting their head down and basically trying to go through us,” Carlisle said.

Clippers: Despite not starting, Zubac still managed to foul out with 8:15 remaining in the game. He had five points and eight rebounds in 18 minutes, which was seven more than he played when Lue went small in Game 3. ... Batum scored 10 points.

Mavericks: Tim Hardaway Jr. and Dorian Finney-Smith were two key secondary scorers for Dallas in the two wins in LA. They were a combined 4 of 17 from the field. ... Marjanovich scored 12 points.

It's the seventh time in the past 50 postseasons that the road team won the first four games of a series. The most recent was Chicago-Boston in 2017, when the Bulls won the first two before losing the last four of the first-round series (including Game 5 at the Celtics).

The Mavericks did with Houston in 2005, losing twice at home before winning two at the Rockets on the way to a seven-game series victory in the first round.

Doncic has a puzzling problem at the free throw line, a place he has a knack for finding with his unique abilities to pass and create at the rim. He missed all five freebies, putting him at 13 of 32 for the series.