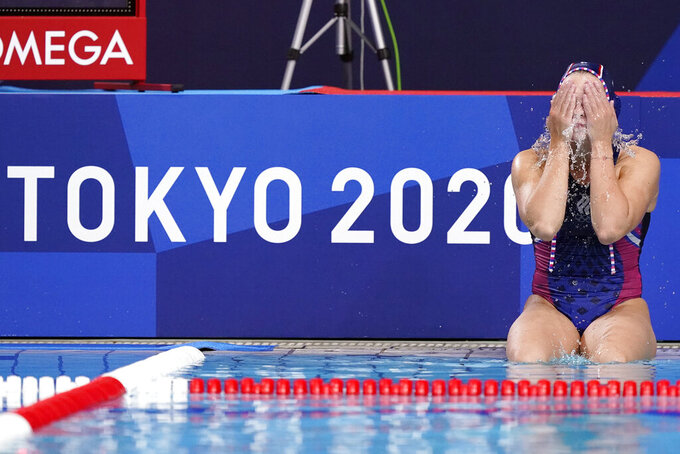 Anastasia Simanovich, of the Russian Olympic Committee, splashes water on her face as she sits on the side of the pool following an 18-5 loss to the United States during a preliminary round women's water polo match at the 2020 Summer Olympics, Friday, July 30, 2021, in Tokyo, Japan. (AP Photo/Mark Humphrey)

TOKYO (AP) — Maggie Steffens was finally by herself, all alone with perhaps the best record in women's water polo, and she had no interest in the view.

Moments after Steffens moved atop the career scoring list at the Olympics, the U.S. captain paid tribute to her family, teammates — past and present — and the women who paved the way for the sport's addition to the Games in 2000.

It was Steffens' name in the record book — right next to a whopping 49 goals and counting — but she was determined to have as many people as possible join her on that top line.

Steffens took down the record on an all-Stanford connection in the third quarter of Friday's 18-5 victory over the Russian team, helping the U.S. rebound from a rare loss to Hungary. Makenzie Fischer found a wide-open Steffens in the middle, and ROC goalkeeper Evgenia Golovina never stood a chance.

It was Steffens' 48th goal in her third Olympics, snapping a tie with Tania Di Mario of Italy for the top spot. Playing with a broken nose after she got hurt against China on Monday, she had four goals on five shots as the U.S. finished group play with a 3-1 record.

“I think what's more amazing about Maggie, and I've said this before, is not the goals that she scores and how many, it's the efficiency in which she does it,” U.S. coach Adam Krikorian said. “That's the sign of a great player.”

The 28-year-old Steffens, the youngest of four siblings in a California family with deep roots in water polo, had a breakthrough performance during the London Games, powering the U.S. to its first Olympic title with 21 goals. She pumped in 17 more during another gold medal run in Rio de Janeiro.

While Steffens tried to avoid talking about herself after her record-breaking goal, her teammates had no such issues.

“She's a very strong worker, offense and defense,” said Stephania Haralabidis, who also had four goals in the win. “She'll never give up. She'll keep pushing, and if she's not the one scoring, she's going to create opportunities for her teammates to score. So that's the kind of player she is. She's so unselfish.”

Steffens' day and the convincing victory for the U.S. came in the aftermath of the country's first loss in women's water polo at the Olympics since 2008, a 10-9 surprise against Hungary on Wednesday.

The loss, dropping the U.S. to 131-4 since it won gold in Rio, led to some soul-searching and a renewed commitment to the way they wanted to play, according to Krikorian. The change was particularly noticeable on the defensive side, led by Ashleigh Johnson's 16 saves.

“This is an extremely competitive group, and they don't like to lose,” Krikorian said. “That's part of the reason why we've had the sustained success, is they just take pride in the way they play. I think from frustration to anger to sadness to relief, I think we felt all of those emotions over the last two days.”

Before the U.S. jumped into the pool, the Netherlands routed South Africa 33-1 to move to 2-1 in group play. The Dutch set Olympic records for most goals in a game and biggest margin of victory.

Bea Ortiz scored five times to lead Spain to a 15-9 win over Australia, and Rebecca Parkes had six goals in Hungary's 17-13 victory over Japan.