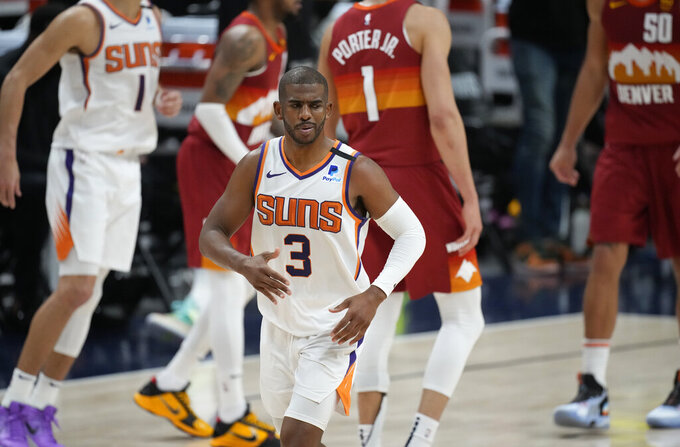 Phoenix Suns guard Chris Paul, front, reacts after hitting a basket late in the second half of Game 4 of an NBA second-round playoff series against the Denver Nuggets, Sunday, June 13, 2021, in Denver. Phoenix won 125-118 to sweep the series. (AP Photo/David Zalubowski)

Phoenix guard Chris Paul has entered the NBA’s health and safety protocols, the Suns said Wednesday, and it is unclear whether he’ll be available for the start of the Western Conference finals next week.

The Suns said Paul's status will be evaluated again Saturday. The earliest possible start date for the West finals is Sunday; that series schedule is contingent on when the other West semifinal between the Utah Jazz and Los Angeles Clippers ends.

Paul has been vaccinated against COVID-19, said a person with knowledge of the situation, speaking to The Associated Press on condition of anonymity because of privacy concerns. And that may mean that Paul could be cleared to return more quickly than some who tested positive earlier this season before vaccines were readily available; it wasn't uncommon for players who entered the protocols to miss two weeks or more.

“My faith isn't going to waver now because we've had a few obstacles," Suns coach Monty Williams said Wednesday. “We've had obstacles all season long and gotten through a lot of stuff. You look forward to these challenges, you embrace them and you move forward."

Phoenix practiced on Tuesday and Wednesday without Paul, starting the process of getting ready for a West finals berth now accompanied with even more uncertainty than first thought. The Suns don't know who they'll play, when they'll play, where the series will start and now, aren't sure if their 10-time All-NBA point guard will be ready.

Williams said the Suns are handling the emotional ebbs and flows, from the highs of sweeping Denver in the second round to reach the West final to the news that Paul's status is in doubt, as well as can be expected.

“One of the things we've said, if you're nutty enough to listen to me around here, we're just going to do the next right thing," Williams said. “And that's focus on the next practice, the next film session. I just left our gym and the spirit was unreal. Our guys understand that we've dealt with stuff this year, other teams have dealt with it, it's just part of the NBA."

Williams said he and Paul have talked daily this week, those chats wide-ranging and including their dismay that Suns guard Devin Booker didn't make the All-NBA team that was released Wednesday — “that's pretty much a joke," Williams said — to more disappointment that nobody on the Phoenix roster made the All-Defensive team.

Williams did not divulge anything specific about Paul's health condition. All the team said was that Paul had entered the protocols.

In March, the league also relaxed some of the protocols that were put into place last fall, doing so in response to players and coaches choosing to receive the vaccine that protects against the coronavirus.

But the NBA also cautioned at that time that “if an individual has symptoms consistent with COVID-19, the previous protocols apply” — which would still mean that anyone with those symptoms “may be subject to quarantine” regardless of their vaccination status.

Paul scored 37 points in Game 4 of the West semifinals against Denver, helping Phoenix finish off a four-game sweep. He has only played in the West finals once in his career, doing so in 2018 with Houston against Golden State. The Rockets held a 3-2 lead in that series when Paul injured a hamstring and had to miss Games 6 and 7; Houston lost both and the Warriors went on to win the NBA title.