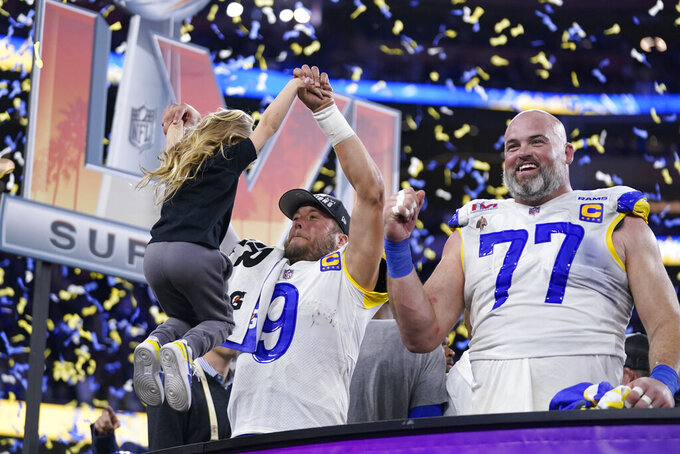 NEW YORK (AP) — The Super Bowl rebounded to draw an estimated 101.1 million television viewers who saw the Los Angeles Rams beat the Cincinnati Bengals on a late-game drive, proving the dominance of football as an audience magnet.

The audience on NBC and Telemundo was a 6% increase over the 95.2 million TV viewers who saw the Tampa Bay Bucs crowned as champions in 2021, the Nielsen company said on Tuesday.

The ratings improvement for what is traditionally the most-watched event of the year was no surprise, given the run of terrific playoff games leading up to it. Viewership for the NFL's divisional round was up 20% over last year, and the conference championships were up 10%, Nielsen said.

Besides the good games, a sense — or hope — that the coronavirus pandemic may be winding down might have contributed to the increased audience, said Cole Strain, head of measurement for the research firm Samba TV.

“We felt there was a little more freedom,” Strain said.

The halftime show starring Dr. Dre, Snoop Dogg, Eminem and Mary K. Blige was also a hit, and NBC expressed hope that the game's halo will kick-start ratings for the otherwise disappointing Winter Olympics in Beijing.

NBC said another 11.2 million people streamed this year’s game, putting the total audience at 112.3 million people. The audience for television and streaming combined is up 12.6% over last year.

For its hometown Bengals, Cincinnati had the highest audience share in the country, meaning the percentage of television viewers watching the game, Nielsen said. Los Angeles didn't even make the top 10 markets.

The most-watched Super Bowl ever remains the 2015 game between New England and Seattle, which had 114.4 million viewers. Last year's slip gave rise to some thinking that the NFL wasn't immune to the overall drop in audience that afflicts virtually all television programs, but this year the NFL defied that gravity.

Live television viewing in the last three months of 2021 was up over the previous year, and that can be attributed solely to football, Strain said.

Nielsen estimated that 103.4 million television viewers watched the Super Bowl halftime show, and Samba's data illustrated how it is become an event in itself. Samba estimated that 379,000 households, or roughly more than a million people, tuned in for the halftime show and left after it was done. Another 1.2 million households, or more than 3 million people, tuned in first for the show and stayed for the game's second half.

“This year was a very big standout in terms of the halftime show performers versus the last year,” Strain said. It was the first time rap artists took center stage at halftime.

As a result, Samba said the 15 most-watched commercials came either just before, during or just after the halftime show.

That represents a change from the time advertisers jockeyed to get their ads placed early in the game or, if they were feeling lucky, late in the fourth quarter to take advantage of a suspenseful finish.

Nielsen said 21.3 million people stuck around after the game to watch Olympics programming. NBC specifically requested to broadcast a Super Bowl during a Winter Olympics year in the hope that each event would benefit the other, and its executives said they hoped to take the same approach in the future.

Late last year, Nielsen adjusted its estimate of viewership for the 2021 Super Bowl from 92 million to 95.2 million, saying it had undercounted the number of people who watched the game outside of their homes.

This story has been corrected to show Nielsen revised its viewership count for last year’s Super Bowl, saying it had undercounted. The streaming count for this year comes from NBC not Nielsen.