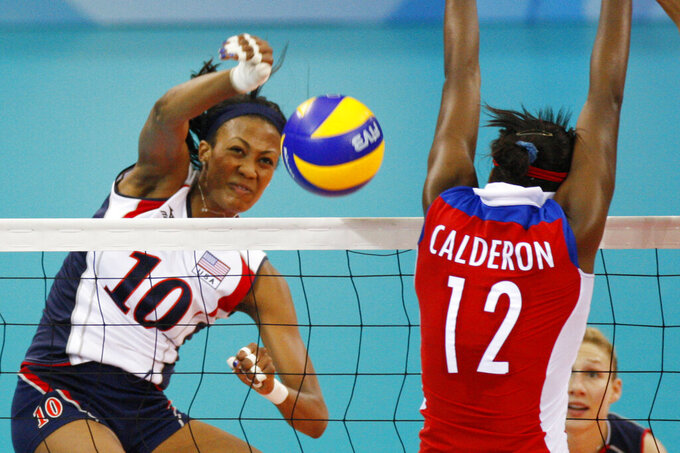 FILE - USA's Kim Glass, left, jumps for the ball with Cuba wing spiker Rosir Calderon during a women's Volleyball match at the Olympics in Beijing on Aug. 11, 2008. A former Olympic volleyball player was attacked Friday, July 8, 2022, in downtown Los Angeles when a man threw a metal object at her face in an assault that fractured bones in her face and left one of her eyes swollen shut, the athlete said in videos posted to social media. Glass, a silver medalist at the 2008 Beijing Olympics, had been leaving a lunch on Friday afternoon when she saw a man run up with something in his hand. (AP Photo/Luca Bruno, File)

Kim Glass, a silver medalist at the 2008 Beijing Olympics, said she suffered multiple facial bone fractures when someone hurled a metal object — possibly a pipe — at her last Friday.

Bystanders restrained the man — identified by police as Semeon Tesfamariam — until officers arrived to take him into custody. He was held without bail.

Tesfamariam, 51, faces a felony count of assault with a deadly weapon that includes allegations of being previously convicted of a violent felony, according to a statement from the Los Angeles County District Attorney's Office.

Glass been leaving a lunch when she saw a man run up with something in his hand and throw it at her head, the athlete said in videos posted to social media.

“He just like looked at me with some pretty hateful eyes,” she said in videos posted to Instagram. “It happened so fast, he literally flung it from the street, he was not even close to me at all.”

Glass, a Los Angeles native, posted videos showing her injuries to her eye, nose and cheek. She said she believes her vision will be OK and thanked a doctor for giving her stitches near one of her eyebrows.

The district attorney's office did not immediately respond to an email asking if Tesfamariam has an attorney who could speak on his behalf.

Tesfamariam had arrests for felony assaults in 2018 and in 2019, the district attorney’s office said. He was initially sentenced to a probationary sentence and later received a state prison term and was on parole at the time of this latest alleged offense, the statement said.

His arraignment had been scheduled for Tuesday, but doubts were raised in court regarding Tesfamariam's competency to stand trial, the district attorney's statement said. He was scheduled to appear at an Aug. 17 court hearing.