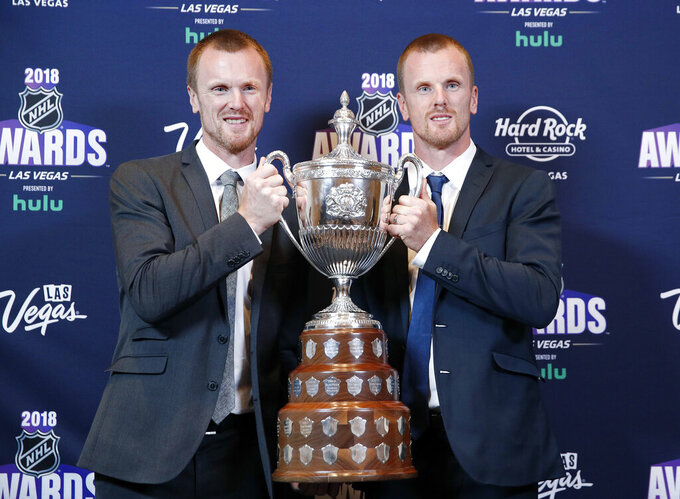 Twins Henrik and Daniel Sedin and Daniel Alfredsson have been elected to the Hockey Hall of Fame, a big day for Swedish hockey as they made up half of the class of 2022.

“It’s nothing you think about when you play the game of hockey,” Henrik Sedin said. “But for us, we put our head down and put our work in every day. We get the most out of our talent. That’s what we’re most proud of today.”

The Sedins and Luongo are being inducted in their first year of eligibility. Alfredsson made it in his sixth year, ending the wait for the longtime Senators captain who helped them reach the Stanley Cup Final in 2007 and spent 17 seasons of his 18-year career in Ottawa.

“It’s such a privilege to have been able to play this sport for a living,” Alfredsson said. “It’s something I would have played for fun for my whole life; without a question to be recognized in this way is truly humbling.”

Alexander Mogilny and Jen Botterill were passed over for another year, along with Rod Brind’Amour, now the coach of the Carolina Hurricanes after captaining them to the Stanley Cup in 2006.

Alfredsson won the Calder Trophy as NHL rookie of the year and was the face of the Senators franchise for almost two decades. His Hall of Fame candidacy was boosted by his gold medal with the Sweden at the 2006 Olympics and Ottawa franchise records for goals, assists and games played.

Each of the Sedins won the Art Ross Trophy for leading the NHL in scoring, and Henrik won the Hart Trophy as MVP in 2010. The Vancouver Canucks made a move in the 1999 draft to make sure they could get Henrik and Daniel with the second and third picks, and their chemistry was well known throughout careers that ended in 2018.

“We kind of joke that they know what they're going to do without ever looking at each other,” Alfredsson said.

Luongo is fourth in league history in victories and was part of the Canucks team that reached the final in 2011 before losing to the Boston Bruins.

“It feels surreal,” Luongo said. "I've been watching and getting a gazillion text messages. It’s a really, truly humbling experience, and the best part of the whole thing is that I get to go in with two of my favorite teammates of all time and two of the greatest people I know in Henrik and Daniel. That makes it so exciting for me to be a part of it.”

It’s the first Hall of Fame class without a Stanley Cup winner since 2016.

Sallinen is the first Finnish women’s player elected to the Hall of Fame. She starred for her country through bronze medals at the 1998 and 2008 Olympics and was part of several world championship teams in between.

Carnegie, who was elected posthumously as a builder, was a hockey pioneer as a Black player in the 1930s, ’40s and ’50s — before Willie O’Ree broke the NHL’s color barrier.

“I’m just totally overwhelmed about the whole thing. For years, people have been working so hard to see that my father was recognized,” daughter Bernice Carnegie said. “We’re either crying or smiling over this.”