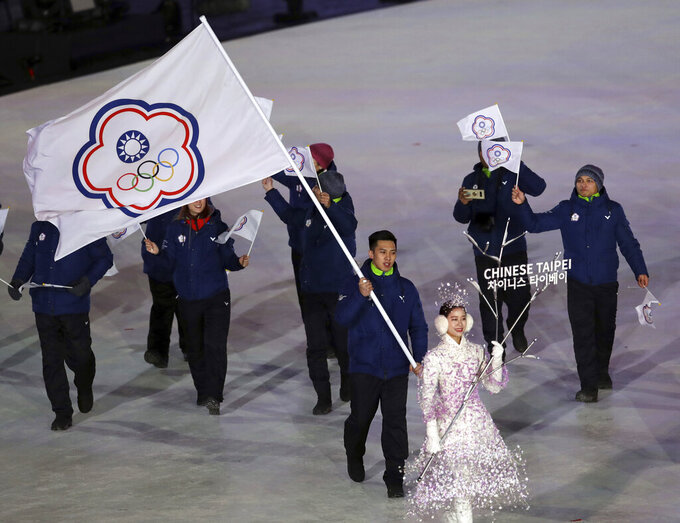 FILE - Lien Te-An, of Taiwan, carries a flag during the opening ceremony of the 2018 Winter Olympics in Pyeongchang, South Korea, Feb. 9, 2018. The four Taiwanese athletes competing in Beijing for the Winter Olympics, which open Friday, Feb. 4, 2022, can’t use Taiwan’s flag. They have long competed under a name, Chinese Taipei, that is rarely used and was forced on the team by a geopolitical divide that predates the Cold War. (AP Photo/Michael Sohn, File)

BEIJING (AP) — Olympic officials in Taiwan have reversed a decision to skip Friday's opening ceremony of the Beijing Games, saying they were pressured to do so by the IOC.

Taiwanese athletes compete as Chinese Taipei at the Olympics as part of a decades-old agreement with China brokered by the International Olympic Committee. China claims the self-ruled island of Taiwan as its own territory and has an ongoing policy of diplomatic and military intimidation.

The IOC said Tuesday “the Chinese Taipei Olympic Committee has confirmed its participation” in opening and closing ceremonies at this year's Winter Games. The statement did not address the Olympic body’s own role in the process.

Officials in Taiwan said the country would “adjust” its plan not to have an opening ceremony delegation in Beijing after repeated requests by the IOC to attend and fulfill obligations under the Olympic Charter.

Last year, the IOC cited charter rules when suspending North Korea from the Beijing Games for refusing to send a team to the Tokyo Olympics.

The Taiwanese team, which has four athletes competing at the Beijing Games, had also identified COVID-19 security among reasons not wanting to send officials to the ceremonies.