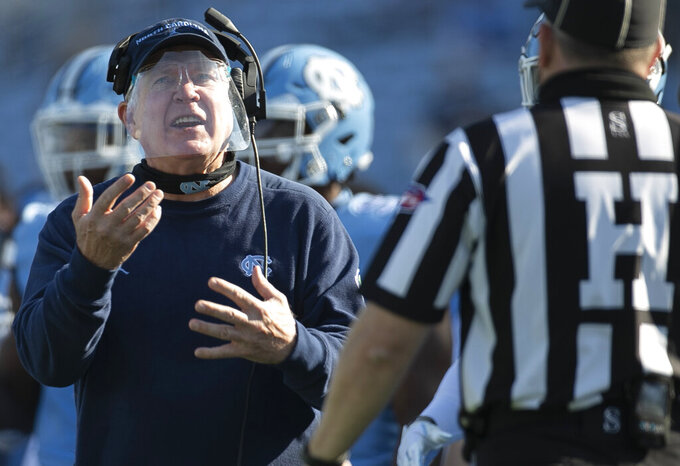 North Carolina coach Mack Brown argues with the official after an interception by Wake Forest defense back Ja'Sir Taylor (6) in the second quarter at Kenan Stadium on Saturday, November 14, 2020 in Chapel Hill, N.C.(Robert Willett/The News & Observer via AP)

North Carolina is finally playing the nonconference game that coach Mack Brown believes could have given him a chance to develop more young Tar Heels players.

UNC hosts Western Carolina from the Championship Subdivision on Saturday. The game replaces one against Charlotte from September.t Tat game canceled after COVID-19 quarantines depleted the 49ers offensive line group.

Brown has lamented losing that early give season date multiple times since it would've allowed the Tar Heels (6-3) to test younger players and reserves with more game reps and build program depth. They get that chance now, sandwiched between late-season games against No. 2 Notre Dame and No. 9 Miami.

“And people will say, ‘Well this game’s not important.’ Well, try to lose it. And then it becomes important.”

The Catamounts (0-2) are closing a three-game set of fall-semester games that began with a loss at nationally ranked Liberty on Nov. 14. The Southern Conference program will play its league schedule in the spring due to the coronavirus pandemic.

“With so many young players, some of it is just these three games, it's worth seeing what we've got," Western Carolina coach Mark Speir said.

“It’s all about us. I don’t talk a lot about Carolina. Our players know. They sit there and watched Carolina play Notre Dame. ... What I’ve got to keep their minds on is: what this is about this week is us getting better, us growing, us developing."

Here are things to know about Saturday’s Western Carolina-UNC game:

Western Carolina has lost all 57 games against Bowl Subdivision opponents, including all 31 against Atlantic Coast Conference opponents.

The Tar Heels are coming off a 31-17 loss to the Fighting Irish, who locked down on the Sam Howell-led prolific offense after the opening quarter. But UNC’s defense helped the Tar Heels hang around until giving up a clinching late touchdown.

“I think we communicated better,” UNC defensive coordinator Jay Bateman said. “I thought we defended the run better. I thought we were more consistent in our in our run fundamentals. ... I think we can play a lot better.”

Penalties remain a problem for UNC.

The Tar Heels are 121st out of 127 teams in the FBS ranks with 72 penalties, while the team’s 76.78 penalty yards per game ranks 117th. They had nine penalties for 90 yards against Notre Dame, including a chain-moving offsides call as the Fighting Irish lined up to go for a fourth-and-1.

Western Carolina is trying to replace quarterback Tyrie Adams as the program’s all-time leader in total offense. The Catamounts have given work to both Mark Wright and Will Jones in that search.

Wright, a junior college transfer, started the opener against Liberty while both led scoring drives in that game. Jones, a redshirt junior, started the second game at Eastern Kentucky while Wright was limited in that one due to a knee issue.

“We've got two guys and one hasn't just clearly separated themselves from the other,” Speir said, adding both will play Saturday.

Western Carolina’s three fall-semester games have come on the road. The Catamounts also closed last season at Alabama, then will play their first two league games in the spring on the road for a run of six straight away from home.