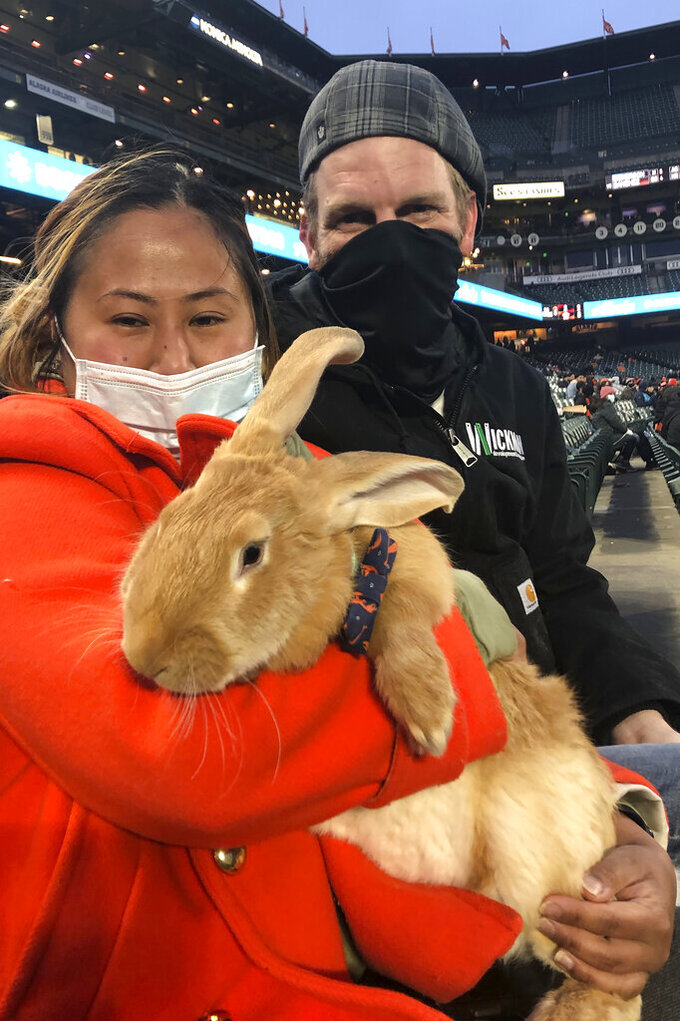 Sporting a dark bow tie with orange crabs to represent the Giants' colors, 4 1/2-month-old Alex earned some major screen time in the early innings — because it's just not every day you see a rabbit at a baseball game.

The bunny in the stands is believed to be a first in the 22-year history of Oracle Park, according to Giants spokeswoman Staci Slaughter.

"Never. Crazy. ... If we win tonight, she (Kato) has to come back tomorrow,” Slaughter said via text message, noting Alex became an instant Twitter sensation.

Daniel Kurish of the Marlins' media relations staff wasted no time getting in on the bunny fun: In the seventh inning, he was off to deliver Miami gear to the good-sized mammal.

“Tonight's attendance, 4,580, not including the rabbit,” official scorer David Feldman announced in the seventh.

Alex has been an important, beloved companion for the 32-year-old Kato, who lost her brewery restaurant called “K-OZ” during the pandemic and now runs a small café in the U.S. Immigration office. The bunny helps her deal with the anxiety and stress of no longer having her main source of income and fulfillment.

“I lost it all because of COVID, so I've been really stressed a lot,” Kato said. “We support local. I was a local. He's well trained, too.”

Giants CEO Larry Baer was thrilled to host Alex and his owners.

The reaction to Kato bringing her bunny was largely positive and still pouring in Friday morning on social media.

Alex has hopped along with the Warriors dance team at its practice outside nearby Chase Center in San Francisco's Mission Bay district. Kato and her fiance, Row, plan to bring him to see Stephen Curry and Golden State soon. Fans return for the Warriors' home game Friday night against the Nuggets.

“The bunny is welcome! If he’s fast, we’ll put him in the game to run the fast break!!” Warriors spokesman Raymond Ridder said.

The bunny has attended a NASCAR event and is an ambassador for Lions Clubs International. Alex helped hand out 400 Easter eggs to children, brings smiles and loves to play, even giving kisses on command. He entertains the masses at farmers markets and has been tubing at Lake Tahoe and kayaking.