Thompson-Herah edges Richardson in the Prefontaine 100 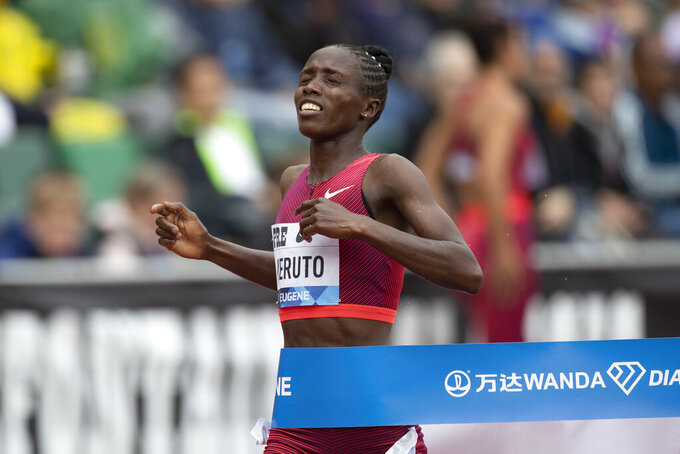 “I came out here with the mindset of a champion and I delivered,” Thompson-Herah said, revealing that she's been battling a shoulder injury this season.

Richardson became a sensation when she won at the U.S. Olympic trials last year but was denied a spot on the team for Tokyo because she tested positive for marijuana. She returned at the Pre last year and finished last in the 100.

Richardson wore bright pink that was adorned with gold charms. She did not speak to reporters after the race, her first sub-11 second mark since last year's trials.

Runners at Hayward Field, which will host the world championships in July, were greeted with passing rain showers, temperatures in the upper-50s and breezy conditions.

American Michael Norman won the 400 a meet-record 43.60. He won at the trials last year and finished fifth in the event at the Olympics, but now has his sights set on the worlds.

“I think it's everyone's dream to win at home, this being the first world championships in Oregon, of course it's going to be a memorable memory for any U.S. athlete,” Norman said.

Trayvon Bromell raised his arms in victory before crossing the finish line of the men's 100 in 9.93 seconds. He crossed the line ahead of Fred Kerley and defending world champion Christian Coleman. Olympic champion Marcell Jacobs withdrew from the Pre earlier this week.

“For me it was personal, not against anybody in the race, but mostly for myself to show people like `Man, I'm here to compete just like everybody else.' I don't train to lose," said Bromell, who won the 100 at the trials last year but failed to reach the final in Tokyo. “So when people complain and things like `Is he going to show up in a big race?' This year I'm worried only about myself. I don't care what the naysayers say."

“I'm feeling good," she said. “A win is always good. In terms of execution, I'm not sure I executed they way I wanted.”

In the Bowerman Mile, the Pre's signature event, Norwegian Jakob Ingebrigtsen won 3:49.76. Last year the Olympic gold medalist in the 1,500 ran the Bowerman mile in 3:47.24, the fastest time on American soil.

Ethiopia's Berihu Aregawi built a big lead in the 5,000 and cruised to victory in a meet record 12:50.05, breaking Mo Farah's record by 16 seconds. Two-time Olympic gold medalist and Oregon native Ryan Crouse r won the shot put with a mark of 75-6 1/4.