Trophy for Ryder Cup winner, award for 1 player on each team 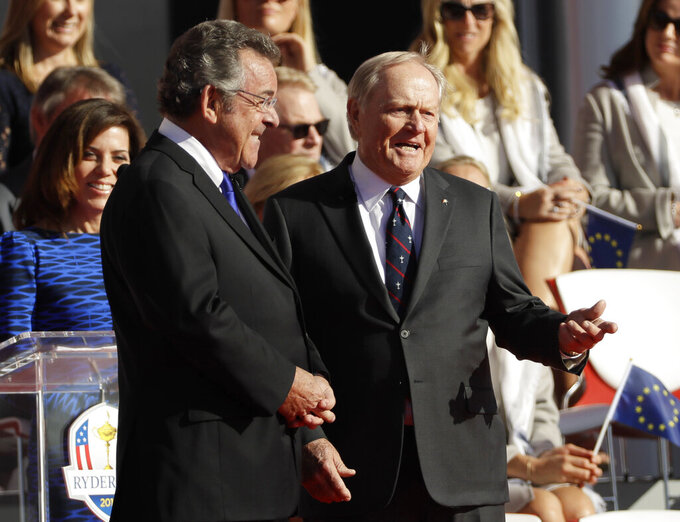 FILE - Tony Jacklin, left, and Jack Nicklaus talk during the opening ceremony for the Ryder Cup golf tournament at Hazeltine National Golf Club in Chaska, Minn., in this Thursday, Sept. 29, 2016, file photo. The Ryder Cup has named an award after them for a player on each team that embodies the spirit of the matches. (AP Photo/David J. Phillip, File) 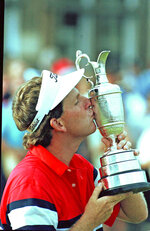 The Ryder Cup for years has had an unofficial award known as “Man of the Match” for the key contributor in golf’s ultimate team event. Organizers now have created an official award for the September matches at Whistling Straits for players on each team who embody the spirit of the matches.

The PGA of America and Ryder Cup Europe on Tuesday announced the “Nicklaus-Jacklin Award,” which will be given to one American and one European player as voted on by a select committee. Aon is the presenting sponsor of the award.

It is named in honor of Jack Nicklaus and Tony Jacklin and the famous conclusion of the final match in 1969 at Royal Birkdale, where Nicklaus conceded a short putt to Jacklin that halved the matched and allowed the Ryder Cup to end in a tie. The Americans still kept the cup as the defending champions.

The award commemorates sportsmanship, teamwork and the type of strategic decisions that attract people to the game.

“Since its inception, the Ryder Cup was imagined as a spirited but friendly competition amongst allies,” said Seth Waugh, CEO at the PGA of America. “At its core, this remarkable tradition is based on the fundamental pillars of sportsmanship, teamwork and performance. We want to recognize and celebrate that key foundational tenet.”

The committee will consist of Nicklaus and Jacklin, other past captains from both teams, the PGA of America president, the PGA of Great Britain and Ireland chairman, representatives of TV rights holders NBC and Sky, and Carlo Clavarino, the executive chairman of international business at Aon.

They will pick players who make decisions critical to sportsmanship, teamwork and performance.

“I’m glad to see that everyone involved in the Ryder Cup is identifying the importance of the choices these players make in the heat of competition and on one of golf’s biggest stages, and that they are recognizing and celebrating individuals who approach this competition with the proper spirit and who put an emphasis on good will and camaraderie,” Nicklaus said.

The matches are Sept. 24-26 at Whistling Straits. The Ryder Cup and Aon will promote the award leading up to the event, including digital content that highlights some of the defining decisions at past Ryder Cups.

Mark Calcavecchia was set to play in his final British Open last year when it was canceled because of the COVID-19 pandemic.

Then he wondered if he would ever make it back.

Calcavecchia, who won in a three-man playoff at Royal Troon in 1989, turned 60 a year ago in June, the age limit for past champions. But the R&A adjusted its criteria this year to make sure no one eligible in 2020 was left out. So he was set to play his final British Open at Royal St. George’s.

Calcavecchia, who made it through a rough bout with COVID-19, started having back spasms last fall, had spinal fusion surgery in January and is still recovering.

“I’m starting to feel pretty good,” he said. “But probably two months ago, I knew I wasn’t going to be ready to play by then.”

He wrote Martin Slumbers, the chief executive of the R&A, to let him know he would not be able to play this summer. He also asked for a reprieve.

“I explained the situation and asked if there was any way they would consider pushing my last Open back next year at St. Andrews,” Calcavecchia said.

He said Claire Welsh, head of player relations for the R&A, told him it would be brought up to the championship committee.

“Two weeks later they said, ‘We love to take care of our past champions, and we’d love for you to play your last Open at St. Andrews,’” Calcavecchia said. “Fantastic.”

Calcavecchia, who last played at the PNC Championship with his son, Eric, said he is starting to hit full wedges and hopes to return to the PGA Tour Champions at the end of August. But his eyes are on next July.

Justin Thomas has a tiny tattoo on his left forearm, just below the elbow, as a tribute to his family. It has three vertical lines that represent his father, mother and himself, with a horizontal line above the middle one to form a “T” for Thomas.

He added a new one at the start of the year that is equally meaningful though rarely seen.

It’s the signature of his late grandfather, Paul Thomas, the first in a generation of golf professionals. That one is on the inside of his right upper arm. Thomas said he had the tattoo done shortly before his grandfather died in early February at age 89.

Getting the signature was the tricky part, so he called his grandmother.

“I said, ‘This is weird, but can you have grandpa sign something?’” Thomas said. “His signature is very Arnold Palmer like, and I always remembered that. I asked her to send me a picture of it. She said, ‘Should I even bother asking?’ I told her no.”

Thomas said he sent a picture of the finished product, which was shown to his grandfather.

“He called me and said he would be charging me residuals every time he saw it on TV,” Thomas said with a laugh.

Matilda Castren of Finland is the only European to win on the LPGA Tour this year. She captured her first LPGA title at Lake Merced last month, and then she gave Jin Young Ko all she could handle before finishing one shot behind in Texas.

Her dream is to play in the Solheim Cup. That will take more work than seems reasonable.

Castren went to Florida Sate and spent two years on the Symetra Tour trying to reach the LPGA Tour. But she is not a Ladies European Tour member, and that's required of all Europeans wanting to play in the Solheim Cup.

Her only chance to make the European team — through qualifying or as a captain’s pick — is to win a co-sanctioned LET event that would immediately make her a member.

Castren will be piling up the miles. After the Marathon Classic this week in Ohio, Castren heads to the Gant Ladies Open in Finland. Then it’s off to the Evian Championship in France, the Olympics in Tokyo, the Ladies Scottish Open and then Women’s British Open. That’s six events in five countries over seven weeks, with four of them (all but Ohio and the Olympics) counting toward LET membership if she wins.

Castren said if she doesn’t make it, her plan is to go through Q-school for the LET to at least become eligible for the next Solheim Cup in Spain.

“Solheim Cup is one of my biggest goals and biggest dreams,” she said. “So I’ll do whatever I can to get in.”

That much is obvious by her itinerary.

Xander Schauffele is in the Scottish Open his week, his first tournament as a married man. He announced on social media that he married longtime girlfriend Maya Lowe in Las Vegas a week after the U.S. Open. They met at San Diego State. ... With just under five months left on the PGA Tour schedule this year, 28 players already have qualified for the Sentry Tournament of Champions at Kapalua. Harris English is the only multiple winner in 2021. ... The Dick's Sporting Goods Open has extended its sponsorship for three years through at least 2024 and will stay at En-Joie Golf Club. ... The Hero Indian Open has been canceled for the second straight year because of COVID-19 pandemic concerns. It had been scheduled for the final weekend in October.

Bryson DeChambeau is the only player from the top 10 in the world who has not finished in the top 20 at a major this year.

“I'm lucky at 51 years old to be able to be doing this. So it's easy to lose track of that when you're not playing well and you're traveling and you're missing your kids.” — Cameron Beckman after winning his first PGA Tour Champions event. He earned $307,500.