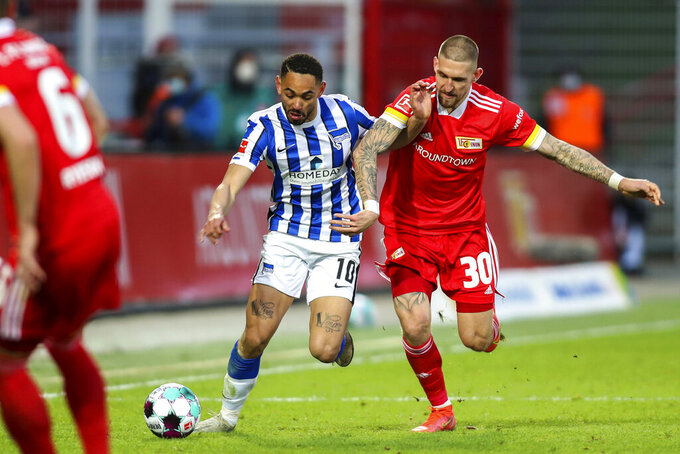 Hertha's striker Matheus Cunha, left, and Union's midfielder Robert Andrich during their German Bundesliga soccer match in Berlin, Germany, Sunday April 4, 2021. Union Berlin denied Hertha Berlin an important win as they battled to a hard-fought 1-1 draw in the Bundesliga, in its battle against relegation and Hertha reciprocated by denting its city rival’s hopes of European qualification. (Andreas Gora/Pool via AP)

BERLIN (AP) — The Berlin derby saw fireworks outside the stadium and bad-tempered clashes on the field as Union Berlin and Hertha Berlin had a hard-fought 1-1 draw in the Bundesliga on Sunday.

Union denied Hertha an important win in its battle against relegation. Hertha reciprocated by denting its city rival’s hopes of European qualification ahead of Union's next game at league leader Bayern Munich.

Seventh-place Union is four points behind the last place for Europa League qualification. Big-spending Hertha is 14th, two points above the relegation zone after its failure to win two straight Bundesliga games this season.

“I was surprised by my team in a negative sense,” Hertha coach Pál Dárdai said. “We were different in the two weeks after the win against Leverkusen. How Union played is how we wanted to play.”

The game started with a bang as Union fans outside set off a loud but hard-to-see fireworks display for the first three minutes. Stadium stewards ran with fire extinguishers toward the noise but could do little to stop the show with fans cheering at the end.

The fans didn’t have to wait long before they were cheering again. Union's Robert Andrich let fly from outside the penalty area with the ball going in off the right post in the 10th minute. That made up for his red card in the previous derby, which Hertha went on to win 3-1 in December.

“Should have put the game away and kept the three points here,” Ryerson said.

Hertha’s Matteo Guendouzi and Grischa Prömel were both booked after the former lashed out at his Union counterpart.

Guendouzi was again involved when Marvin Friedrich conceded a penalty for a foul on the French player in the 32nd. Dodi Lukebakio converted the spot kick.

The first half ended on another sour note with Andrich and Lukebakio in a tangle on the sideline. Referee Sascha Stegemann blew his whistle before tempers heated any more.

The second half failed to yield any improvement from either team despite the efforts of Union supporters singing outside. There have only been fans at one of the four derbies between the teams in the Bundesliga, the first on Nov. 2, 2019, when Union won a fiery duel 1-0.

Hertha midfielder Sami Khedira marked his 34th birthday by coming on for Guendouzi in the 79th minute.

“You can forget about the second half,” Dárdai said.

Hertha announced before the game that goalkeeper Rune Jarstein was in quarantine after testing positive for the coronavirus.

“He’s doing well. After talks with the health authorities, no further steps necessary,” the club said on Twitter.

A late own-goal from Werder Bremen defender Ludwig Augustinsson was enough for Stuttgart to edge the early game 1-0. It stretched promoted Stuttgart’s unbeaten run at home to six games.