US coach worried about future of collegiate water polo 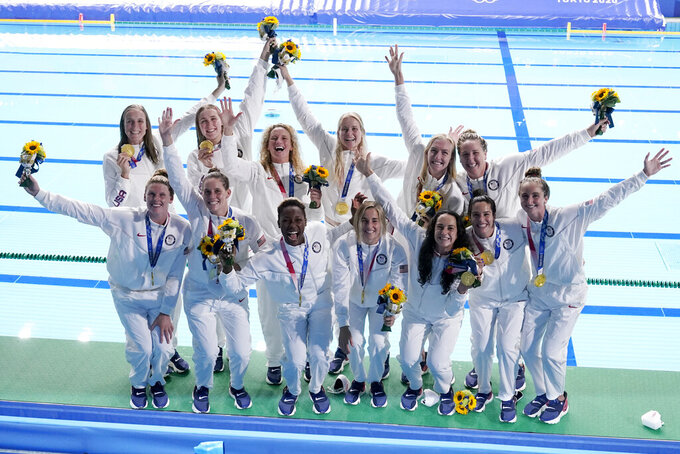 TOKYO (AP) — Forget about an aging roster and the future of coach Adam Krikorian, even the emerging young players on some of Europe's top teams, the biggest threat to the dominant U.S. women's water polo program just might be the shifting landscape at the collegiate level.

The U.S. won its third consecutive gold medal at the Tokyo Olympics on Saturday, pounding Spain for a 14-5 victory. It broke its own records for most goals and biggest margin in the final while improving to 134-4 since it won gold at the 2016 Rio de Janeiro Games.

It holds every major title in the sport, and likely will have another loaded roster in Paris in 2024. But there are signs of trouble on the horizon.

Collegiate programs have fueled the United States' rise, but the future of those teams is uncertain with the NCAA examining its system after it lifted its long ban on college athletes earning money for endorsement and sponsorship deals.

“It's something that we're very cognizant of and aware of, that the collegiate system for us is, if I could compare it to the system in Hungary or Spain, it's essentially our professional system,” Krikorian said. “We don't have anything else.”

Each of the 13 players on the U.S. women's roster played college ball, and the American collegiate system also helped develop a couple of the top foreign players in Tokyo.

“Without it, our sport's in jeopardy,” said Krikorian, who played at UCLA and coached the Bruins' programs before taking over the national team.

“I'm not sure what the future looks like for college sports like water polo. I happen to think that water polo athletes are some of the toughest, certainly some of the brightest, and the most well-rounded human beings out there, and if you don't want them on your campus, that's unfortunate for you.”

European powers such as Spain and Hungary rely on clubs, professional leagues and training sites for developing most of their players. While praising the system in his country, Spain assistant Jordi Valls also paid tribute to what the U.S. is doing.

“I think, quite clearly, we have to recognize that a lot of hard work is done and there is a certain structure behind the U.S. team,” he said through a translator.

In the short term, the biggest question for the U.S. is the status of Krikorian, 47. He described himself as fried after dealing with the unusual challenges during this Olympic cycle created by the COVID-19 pandemic. He is going to take some time before deciding whether he wants to return for Paris.

While Kaleigh Gilchrist, who scored two goals in the final against Spain, and Melissa Seidemann likely won't be back, the bulk of the roster could return for the 2024 Games.

No team — men or women — has ever won four straight water polo titles at the Olympics.

“Today, I think that was just a show of who we are as a team,” captain Maggie Steffens said, “that no matter the adversity that's thrown our way, we stick together as a team and we rise up and we fight in those moments."