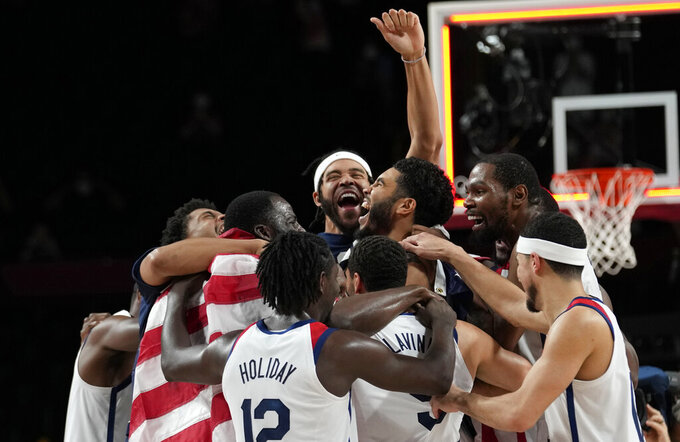 USA Basketball will face Puerto Rico, Mexico and Cuba in the first round of qualifying for the 2023 Basketball World Cup.

The Americans, who won a fourth consecutive Olympic gold medal in Tokyo but finished only seventh at the most recent Basketball World Cup two years ago, found out their qualifying opponents Tuesday when the draw was held at FIBA headquarters in Mies, Switzerland.

It will also be the first major tournament for USA Basketball with Grant Hill as managing director. Hill is succeeding Jerry Colangelo in that role; Colangelo oversaw each of the last four Olympics for the U.S., helping assemble teams that won gold medals each time.

There are 80 teams in the qualifying rounds. It begins with a double round-robin; all teams in the various groups for the first round will play the other three teams in their group twice. First-round games will be played during three different windows — Nov. 20-30, Feb. 21-March 1 and June 27-July 5.

Defending World Cup champion Spain, trying to become one of the 12 European qualifiers for the tournament, opens with games against Ukraine, Georgia and North Macedonia in the opening round.

As hosts, the Philippines and Japan are already in the 32-team World Cup field. The other 30 spots will be decided through qualifying. Indonesia does not get an automatic spot as a host country.

The region has 16 teams in qualifying, in four different four-team first-round groups, with 12 of those nations making the second round. From there, the field will be pared to the seven World Cup qualifiers; the first-, second- and third-place finisher in both second-round groups will make the World Cup, along with the best fourth-place team.

In Group A, Argentina — which, barring a change of his mind, will be without Luis Scola for a major international tournament for the first time in more than two decades — faces Venezuela, Panama and Paraguay in the first round.

Group B includes Brazil, Uruguay, Colombia and Chile. Group C has Canada, the Dominican Republic, the U.S. Virgin Islands and the Bahamas. And in Group D, it’s the U.S., Puerto Rico, Mexico and Cuba.

The same qualifying rules apply in Europe, with four-team groups assembled for the first round. But the field is double the size of other regions, with 32 teams playing for what will become 12 World Cup spots.

In Group A, Serbia, Latvia, Belgium and Slovakia will play. Group B has Greece, Turkey, Britain and Belarus. Group C has Olympic semifinalist Slovenia along with Croatia, Finland, Sweden. In Group D, it’ll be Germany, Poland, Israel and Estonia.

Group E is led by Olympic silver medalist France, which will meet Montenegro, Hungary and Portugal. Group F has Lithuania, Czech Republic, Bulgaria and Bosnia-Herzegovina. Group G is the Spain-Ukraine-Georgia-North Macedonia group, and Group H will see Italy, Russia, the Netherlands and Iceland facing off.

There are 16 teams vying for what will be five World Cup spots. They were broken down into four four-team groups for the first round, and the top three finishers in those groups will move on to the second round.

Group A has Nigeria, Mali, Uganda and Cape Verde. In Group B, it's Tunisia, Cameroon, South Sudan and Rwanda. Group C has Angola, Ivory Coast, Central African Republic and Guinea. And in Group D, it's Senegal, Egypt, Congo and Kenya.

Another 16 teams are still in the mix for eight World Cup spots, with the Philippines and Japan — as host nations — already securing two of those, but they will also take part in the qualifying anyway. The third World Cup host, Indonesia, must still qualify for the World Cup and did not get an automatic entry.

In Group A, it'll be New Zealand, South Korea, the Philippines and India. Group B — which shapes up as one of the most competitive first-round groups in the entire qualifying tournament — features Olympic bronze medalist Australia, China, Japan and Taiwan. Group C has Jordan, Lebanon, Indonesia and Saudi Arabia. In Group D, it's Iran, Kazakhstan, Syria and Bahrain.