US to face Spain in women's water polo final at Olympics 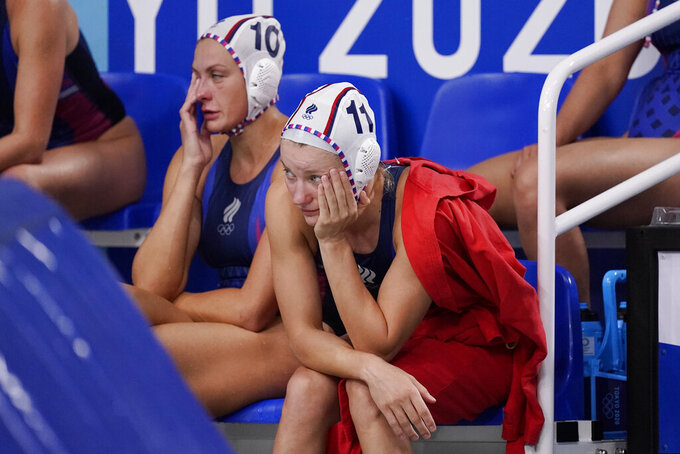 Russian Olympic Committee players Evgeniya Ivanova (11) and Evgeniya Soboleva (10) watch from the bench during a loss to the United States in a semifinal round women's water polo match at the 2020 Summer Olympics, Thursday, Aug. 5, 2021, in Tokyo, Japan. (AP Photo/Mark Humphrey)

TOKYO (AP) — Maddie Musselman thinks about it all the time. Playing on the talented U.S. women's water polo team, Musselman is constantly debating whether she should pass or shoot the ball.

She decided to shoot Thursday, and it worked out quite well for the Americans.

Musselman scored four of her five goals in the second half, rallying the U.S. to a 15-11 victory over the Russian team in the semifinals at the Tokyo Olympics.

“It's a battle that I personally fight every day, in terms of is it your shot or is it the person next to you,” Musselman said. “I think today it came down to my shot.”

Led by Musselman and clutch plays by Alys Williams and Melissa Seidemann, the U.S. stayed in the mix for a third consecutive gold medal. Next up is Spain, which advanced with an 8-6 victory over Hungary.

Captain Maggie Steffens had three goals as the U.S. improved to 133-4 since it won gold at the 2016 Rio de Janeiro Games. It has won three in a row since it lost 10-9 to Hungary in group play for its first loss at the Olympics since the 2008 final against the Netherlands.

“I'm pretty sure this year is one of the years where (it's) more even between the teams, so it's going to be a really cool final to play,” Spain player Roser Tarrago said.

Spain posted the first three goals. Hungary finally got on the board when Dorottya Szilagyi scored with 4:39 left in the first half.

“I feel like they sandbagged us a little bit in the prelims,” U.S. coach Adam Krikorian said. “We spoke about that, so we were prepared for them to come out strong. But when you feel it, they did an awesome job.”

Maria Bersneva had three goals on three shots for the Russian team, which won bronze in 2016. Anastasia Simanovich and Ekaterina Prokofyeva each scored twice, and Evgeniia Golovina made 10 stops.

The Russians shut down the U.S. for much of the first half, forcing the Americans to go deep into the shot clock looking for an opening. Simanovich was tough inside and Bersneva's power-play goal made it 5-2 with 3:24 left.

“I’m very pleased with how we started and it was a good feeling when we were a few goals ahead," Simanovich said through a translator. “It gave us confidence, but then we had a few issues and allowed them to level.”

The U.S. started to find its way late in the second quarter. Seidemann made it a one-goal game at the break when she connected from long range with 1 second left.

“I mean it's huge, especially coming from Mel, who is playing center, playing defender,” Musselman said, “and to be able to step up and take a shot like that got us all pumped.”

The game was tied at 11 with 5:30 left before the U.S. closed it out with four straight goals. After Aria Fischer put the Americans ahead to stay, Williams buried a big shot from the side to make it 13-11 with 3:37 left.

The 27-year-old Williams is playing in her first Olympics. She was cut when the roster was finalized for the Rio Games.

“I looked back and I just saw the bench erupt. And they erupt for every one today, but that one was certainly very special,” Krikorian said of Williams' goal.