US Olympic board member pushes quiet diplomacy in Peng case 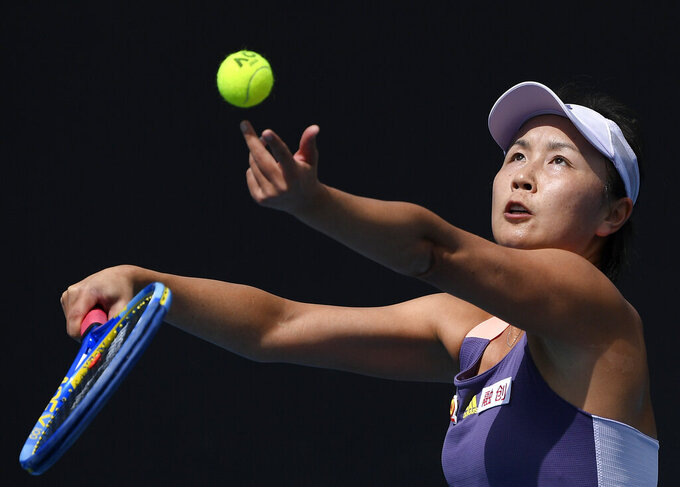 FILE - China's Peng Shuai serves to Japan's Nao Hibino during their first round singles match at the Australian Open tennis championship in Melbourne, Australia, on Jan. 21, 2020. The stand the women's professional tennis tour is taking in China over concern about Grand Slam doubles champion Peng Shuai's well-being could cost the WTA millions of dollars and end up being unique among sports bodies. The International Olympic Committee is preparing to host the Winter Games in Beijing in two months and has held calls with Peng to show she is doing well — but never raised the matter of the sexual assault allegations she made against a former Chinese government official. (AP Photo/Andy Brownbill, File)

DENVER (AP) — A member of the U.S. Olympic and Paralympic Committee's board of directors is among those echoing the IOC's call for behind-the-scenes negotiations to ensure the well-being of tennis player Peng Shuai.

International Tennis Federation president David Haggerty, who received an automatic spot on the USOPC board when he became a member of the International Olympic Committee in 2020, told BBC that the tennis organization does not “want to punish a billion people” to resolve the case of Peng, who dropped from sight after publicly accusing a former top Communist Party official of sexual assault.

The statement comes less than two weeks before Haggerty takes part in a USOPC board meeting as the board finalizes its preparations for the Beijing Olympics. Though Haggerty does not speak for the USOPC and its 18-person board, his quotes about the ITF's stance on the Peng situation come before the USOPC has publicly delivered its own message. The USOPC is expected to formalize its position at the board meeting.

Like most similar organizations sending athletes to Beijing, the USOPC is trying to straddle the line between standing up for athletes while not putting its own athletes at risk by provoking the Olympic hosts. The federation almost certainly will be compelled to take a stance on the Peng situation, especially considering its push over the last few years to put athlete safety, well-being and mental health at the fore of its considerations. As a board member, Haggerty has participated in discussion of those policies.

Furthering tensions was the White House announcement this week of a diplomatic boycott of the upcoming Games to protest Chinese human rights abuses — a move that China promised to react to with “firm countermeasures.”

Haggerty's role at the ITF led to his positions with the IOC and USOPC. As ITF president, he leads the organization that oversees global tennis and runs the Davis Cup and Olympic tennis tournament. Some in the global sports community had been waiting to see if the ITF would follow the lead of the Women's Tennis Association, which last week suspended all its tournaments in China until it is assured of Peng's safety.

In his interview with BBC at the Davis Cup last weekend, Haggerty said the ITF stands in support of women's rights, while also pushing an IOC talking point, saying ITF “will continue to work behind the scenes and directly to bring this to resolution.”

“But you have to remember that the ITF is the governing body of the sport worldwide, and one of the things that we are responsible for is grassroots development,” he said. "We don’t want to punish a billion people, so we will continue to run our junior events in the country and our senior events that are there for the time being.”

A number of tennis players, including Serena Williams and Naomi Osaka, have come out with statements in support of Peng.

The IOC says it has held a pair of video calls with Peng and that she appeared to be “doing fine.” It has not released any video or transcripts of the call and has not referenced her sexual assault allegation against a former Chinese government official. It has said its policy is to pursue “quiet diplomacy” in trying to assure Peng's well-being.

The 35-year-old, a three-time Olympian and former No. 1 in doubles, fell out of public view after raising the allegations about former vice premier Zhang Gaoli in a Nov. 2 social media post that was quickly taken down by Chinese authorities.