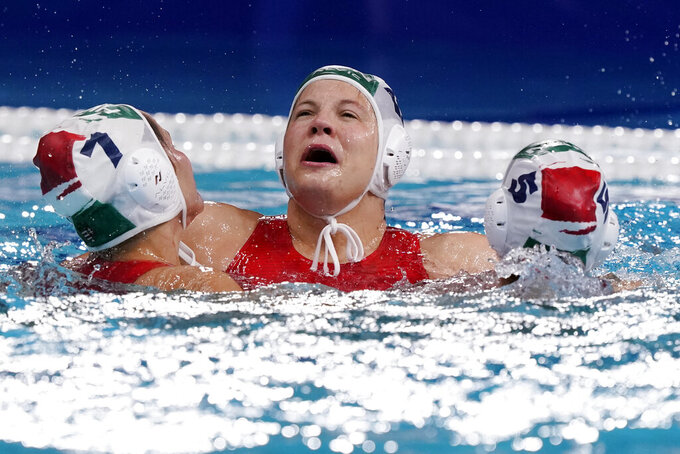 TOKYO (AP) — Maddie Musselman held her phone out, and the U.S. women's water polo team gathered for a picture on the top step of the podium.

It was a familiar scene. The dynasty is alive and well.

Musselman scored three times, Ashleigh Johnson made 11 saves and the U.S. won its third consecutive gold medal on Saturday, routing Spain 14-5 in the final at the Tokyo Olympics.

“We're having fun out there, and I think you could see that today,” Musselman said. “Everyone brought their best when their best was needed."

Aria Fischer, Kaleigh Gilchrist and Alys Williams had two goals apiece as the U.S. improved to 134-4 since it won gold at the 2016 Rio de Janeiro Games. It broke its own records for most goals and biggest margin in the final.

Maggie Steffens and Melissa Seidemann became the first women to win three gold medals in water polo. Musselman was named MVP, and Johnson was selected as the top goalkeeper of the tournament.

The day belonged to the U.S. — again.

“In the moments where you want to be at your best, it's like it's just magic when it happens,” Johnson said. “But ... we're putting in the work every day.”

After falling 10-9 to Hungary in group play in its first loss at the Olympics since the 2008 final, the U.S. ripped off four straight wins by a combined score of 63-26.

“I think this team loves competition, so we want the hardest games and the hardest moments,” Gilchrist said.

The U.S. joins the men’s teams from Britain (1908-1920) and Hungary (2000-2008) as the only countries to win at least three straight water polo titles at the Olympics. It is the only team to medal in each of the six women’s tournaments at the Games.

Maica Garcia had two goals for Spain, which has lost 13 in a row against the U.S., including the finals of the 2017 and 2019 world championships. The silver medal matches the country’s best finish in the women’s competition.

“We gave it all. That's all we could do," said Roser Tarrago, fighting back tears.

Garcia, Tarrago, Anni Espar, Laura Ester, Pili Pena and Marta Bach also were on Spain's roster when it lost to the United States in the final at the 2012 Olympics, and they looked primed for revenge in Tokyo. The reigning European champions had won five of six, outlasting Hungary in the semifinals.

Instead, Spain was pushed aside by the U.S. once again.

“Destroyed. I really wanted this gold and I can only say congratulations to the USA," Espar said. “They played an amazing game.”

Steffens and company saved their best for last — like they often do. The Americans were shaken by their loss to Hungary, but they regrouped with their depth and defense.

Six U.S. players scored on the way to a 7-4 halftime lead. Spain didn’t get its first goal until there was 2:15 left in the first quarter.

When the U.S. ripped off five straight goals in the third, it was all over. Johnson took a seat on the bench with 2:35 left, and the party was on.

“We’ve talked a lot about the fine line between confidence and complacency, but we’ve done just a fantastic job of just staying focused through this process,” coach Adam Krikorian said, “and it’s amazing.”

Captain Rita Kesthelyi had two goals for Hungary, which finished fourth in each of the past three Games.

Kesthelyi's father, Tibor, played water polo for Hungary in the 1988 Olympics, and she said her mother was among the first women to play the sport in her country. Rita Kesthelyi fought back tears when asked about the significance of the bronze medal.

“I'm sure everyone is very, very proud of us and happy that we achieve this,” she said. “It's a huge step in our history.”