US view: Empty stadiums in World Cup qualifying not all bad 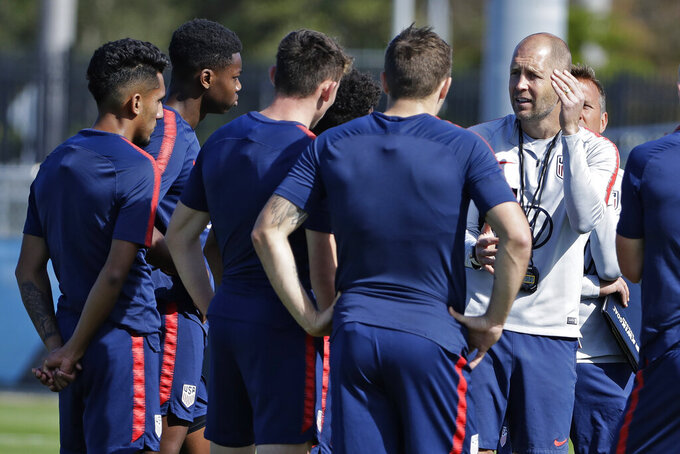 FILE - In this Wednesday, Jan. 8, 2020, file photo, Gregg Berhalter, right, head coach of the U.S. Men's National Soccer team, instructs some of his players during drills in Bradenton, Fla. The fallout of the coronavirus pandemic could benefit the U.S. soccer team when World Cup qualifying begins in North and Central America and the Caribbean. “If we go to qualifying in empty stadiums, that’s going to change that dynamic considerably, some for the positive and some for the worse,” Berhalter said Tuesday, July 21, 2020. (AP Photo/Chris O'Meara, File)

The fallout of the coronavirus pandemic could benefit the U.S. soccer team when World Cup qualifying begins in North and Central America and the Caribbean.

“If we go to qualifying in empty stadiums, that’s going to change that dynamic considerably, some for the positive and some for the worse,” U.S. coach Gregg Berhalter said Tuesday. “You think about us traditionally going down to Central America and playing very hostile environments and that’s completely taken away, that could give us an advantage.”

The U.S. qualified for seven straight World Cup before failing to reach the 2018 tournament in Russia due to home losses to Mexico and Costa Rica followed by a final game defeat before just a few hundred fans in Couva, Trinidad. The CONCACAF hexagonal for the 2022 tournament in Qatar was scheduled to start this September, but that international window was removed and returned to leagues following the disruptions of this spring.

Berhalter thinks the October window may remain for national teams but that qualifying openers may be pushed back to November or March. CONCACAF President Victor Montagliani of Canada said the format may change -- Canada was set to just miss reaching the final six.

Berhalter was hired in late 2018, coached the Americans to 11 wins, five losses and two ties in 2019, then opened 2020 with a 1-0 win over Costa Rica. While American star Christian Pulisic struggled on the field in his first season with Chelsea and got hurt Jan. 1, he’s solidified a starting spot since play resumed in mid-June.

“He’s picking the ball up in space, in pockets and just being really aggressive, going at defenders, dribbling at defenders,” Berhalter said. “You can see the dramatic shift in how his teammates relate to him now. They actually look to him, whereas times in the beginning you’re thinking, wait, why aren’t they passing him this ball? Now they get the ball, their first glance is to him. And he’s really grown to be an important part of this group, important part of that team, and it’s been fun to watch.”

Berhalter had said in February he intended to select 17-year-old Gio Reyna for March exhibitions, matches called off. A son of former U.S. captain Claudio Reyna, Gio debuted for Borussia Dortmund on Jan. 18 and scored once in 18 appearances. The midfielder made his first starts during the final two matches of the season.

“He’s one of those players that will keep rising to the challenges, and we need to provide him with that,” Berhalter said. “Does that mean him getting an opportunity, an early opportunity to play in difficult games? I think that’s going to make him better, make him even rise to a higher level. Dortmund did a great job of integrating him into the group in a calculated way to help him perform at high levels.”

Zack Steffen, the top American goalkeeper, had an opposite experience in Germany. He signed with Manchester City from Columbus last summer, was loaned to Fortuna Düsseldorf and started the first 17 Bundesliga matches. Then he injured a knee and didn’t play again. He is expected to be at Manchester City next season, likely as a backup to Ederson.

“Man City is a super-high level,” Berhalter said. “And to gain that experience for a year, to be in that training environment and have the opportunity to potentially break into that team is exciting. And I think it would be worth it, I would say. You always have to weigh if you’re going to be sitting on the bench and not playing enough games, but to me that opportunity alone is something special. Not too many players in the world get a chance to play for one club like that.”

Fifty players have appeared in 19 matches under Berhalter but not Darlington Nagbe, who has not been on the field for the U.S. since March 2018. The midfielder has not wanted to lose family time, but Berhalter thinks he would excel in the roster.

“There’s an open door for him,” the coach said. “These games are difficult and you need players that are committed to it. And if there’s hesitation by him, I would worry what that would do to the performance. And so he has to be ready for it. And we can push him, but it needs it to be something he says that, OK, this is what I really want: My goal is to play in a World Cup.”

Forward Tim Weah needs to regain fitness and a starting role with Lille after a year of injuries, and Berhalter is confident striker Ayo Akinola will remain with the U.S. program and perhaps play for the under-23 team in Olympic qualifying. Akinola, born in Detroit, also is eligible for Canada and Nigeria.

While pleased with the emergence of right-footed outside back Sergiño Dest, Berhalter hopes for a naturally left-footed left back option who can overlap Pulisic and cross into the penalty area.

“We think that with a young group, you do need experienced players, as well, to help supplement that experience,” Berhalter said. “The door’s open for these guys when they’re playing well, when they’re fit, because we know they can make an impact on the international level.”

Berhalter is confident his group will jell in qualifying, whenever it starts.