US women dissect the Olympics while Canada celebrates gold 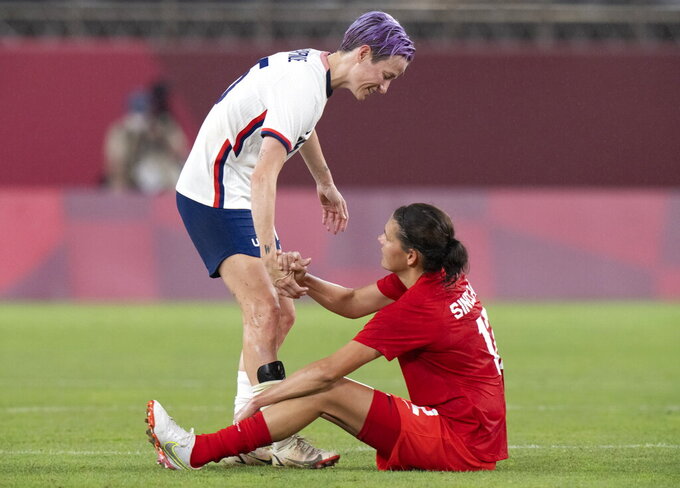 The World Cup champions and overwhelming favorites going into the women's Olympic soccer tournament came away with a bronze medal after a disappointing run in Japan.

The women were beaten in the semifinals by North American rival Canada, which went on to win the Olympic title in a penalty shootout after a 1-1 draw with Sweden.

While Canada celebrates, the Americans will begin dissecting a tumultuous tournament that started with a 3-0 loss to Sweden, the team that eliminated them in the quarterfinals at the 2016 Rio de Janeiro Olympics.

Going into the Tokyo Games, the Americans had not lost a match since January 2019 — well before their victorious run in the Women's World Cup in France.

The group held a team meeting before defeating Australia 4-3 for third place in Kashima. For the first time in the tournament, the United States looked like the offensive juggernaut that made them the No. 1 team in the world.

“We may look like the most talented team on paper. And if you look at our roster, one through 22, we would probably win every major tournament, just by looking at that roster," veteran United States forward Carli Lloyd said. "But, as we all know, talent doesn’t win the championships. And without the mentality, without the heart, the grit, the fight, we won’t win anything, so I think it was important for everybody to hear."

The United States was hoping to win its fifth gold medal and become the first team to win an Olympics following a World Cup title.

The loss to Sweden was the first for the United States following a 44-match unbeaten streak. The two loss at the Tokyo Games were also the first for coach Vlatko Andonovski, who took over after Jill Ellis stepped down following the World Cup.

Andonovski said the team made a decision to finish strong together as a team. And while the bronze wasn't the gold, it was still a medal in an important tournament.

“There were tough moments. Obviously it started really tough for us, for our team," he said. "That first loss made a mark for the rest of the tournament, and to come out of it with that game, or finish the tournament with the game that we did, I’m just proud of the team. I’m proud of the players."

Netherlands forward Vivianne Miedema lit up the field with an Olympic record 10 goals, including four in a 10-3 victory over Zambia to open the tournament.

She scored both of the Dutch team's goals in a 2-2 draw with the United States in the quarterfinals, but the Netherlands was eliminated in a penalty shootout.

The Olympics was likely the last major tournament for a handful of the sport's biggest names. Among them is Lloyd, who was the oldest player on the U.S. national team at 39.

“No, I haven’t made any official announcement yet, but obviously I am at the tail end of my career. Physically I feel really good, but at some point I have to hang up the boots and live life, and I know my husband is eagerly waiting for me to switch off because it’s been 17 years of just grinding away," she said.

Others who could be moving on include Canada forward Christine Sinclair, who is 38. Sweden goalkeeper Hedvig Lindahl is also 38 and said she plans to step away.

Sinclair, who also holds the international scoring record among men and women with 187 career goals, now has a gold medal to add to her accomplishments. So is it time to retire?

“I headed into this tournament knowing I’m not making a decision out of joy, or sadness, depending how this tournament went,” she said. “It’s not how I make decisions. So who knows? I mean, there’s a World Cup out there.”

Canada midfielder Quinn made history as the first transgender athlete to win a gold medal at the Olympics.

Quinn is non-binary and uses they and them pronouns. Quinn came out as transgender last year.

“I think for me, I was really proud to get here and just the performances that I put out on the pitch," Quinn said. "For me it’s just been getting back to why I love the sport, because I know there’s a lot of external stuff going on all the time and so I think once I step on the pitch, it’s just finding the joy that I found as a kid. Trying to take all the pressure away and just enjoy the moments.”

One of the biggest surprises of the tournament was Zambia forward Barbra Banda, who became the first woman to score a pair of hat tricks at the Olympics. Her six goals also tie her for the most by an African player at the Olympics.

Still only 21, Banda plays professionally for Chinese club Shanghai Shengli, but likely will command attention from higher-profile European and American teams in the wake of her Olympic performance.

Zambia, which made the Olympic tournament for the first time, did not advance out of the group stage.

The next major tournament for the women is the 2023 World Cup in Australia and New Zealand. The event is scheduled to start July 20 and end on Aug. 20, with an expanded field of 30 teams, up from 24.