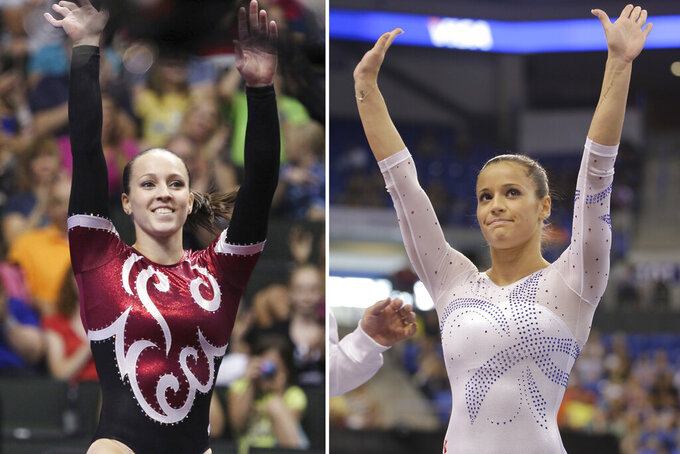 FILE - At left, Chellsie Memmel is shown during the final round of the U.S. gymnastics championships, Saturday, Aug. 20, 2011, in St. Paul, Minn. At right, Alicia Sacramone waves to the crowd during the women's senior division at the U.S. gymnastics championships, Sunday, June 10, 2012, in St. Louis. USA Gymnastics is turning to two of its most-decorated athletes to help guide its women's elite program. Alicia Sacramone Quinn and Chellsie Memmel, teammates on the 2008 U.S. Olympic team that earned silver in Beijing, are part of the new leadership paradigm within the organization. (AP Photo/File)

USA Gymnastics is turning to two of its most-decorated athletes to help guide its women's elite program.

Alicia Sacramone Quinn and Chellsie Memmel, teammates on the 2008 U.S. Olympic team that earned silver in Beijing, are part of the new leadership paradigm within the organization.

Memmel, the 2005 world champion, will be the technical lead for the women's program. Sacramone, a 10-time world championship medalist, will serve as the program's strategic lead. They will be joined in the new system by Dan Baker, who will transition from the elite team women's developmental coordinator to the developmental lead.

All three will begin their new positions on June 1.

The technical, strategic and developmental lead positions were established in March following the resignation of high-performance director Tom Forster, who stepped down last November after leading the U.S. women to gold at the 2018 and 2019 world championships and silver at the Tokyo Olympics.

USA Gymnastics Chief Programs Officer Stefanie Korepin said the organization wanted to get away from a model that left the perception — be it real or perceived — that one person was in charge of the elite program.

Memmel, who retired in 2012 but made a surprising comeback last year at age 32 to compete in the 2021 national championships, “will direct training and skill development at National Team camps and clinics and will travel to clubs around the country to help facilitate streamlined implementation of the program’s high performance strategy," according to USA Gymnastics.

Sacramone Quinn, the captain of the 2008 Olympic team, will focus on the program as a whole and the overarching strategy for women's national team.

“I look forward to building personal relationships with all of our National Team athletes and coaches and continuing to cultivate a culture of excellence, where we build up our athletes physically, mentally and emotionally," Sacramone Quinn said in a statement.

Sacramone Quinn has worked with USA Gymnastics in various capacities since her retirement in 2013. She was on USA Gymnastics’ TOPS development staff from 2013-2014 and served as the head coach of TAG USA Gymnastics & Trampoline from 2014-2018. She has worked as a TV analyst for ESPN since 2015 among other ventures.

Baker, head coach at Stars Gymnastics Training Center in Houston, has been a fixture in the elite world for more than 20 years.