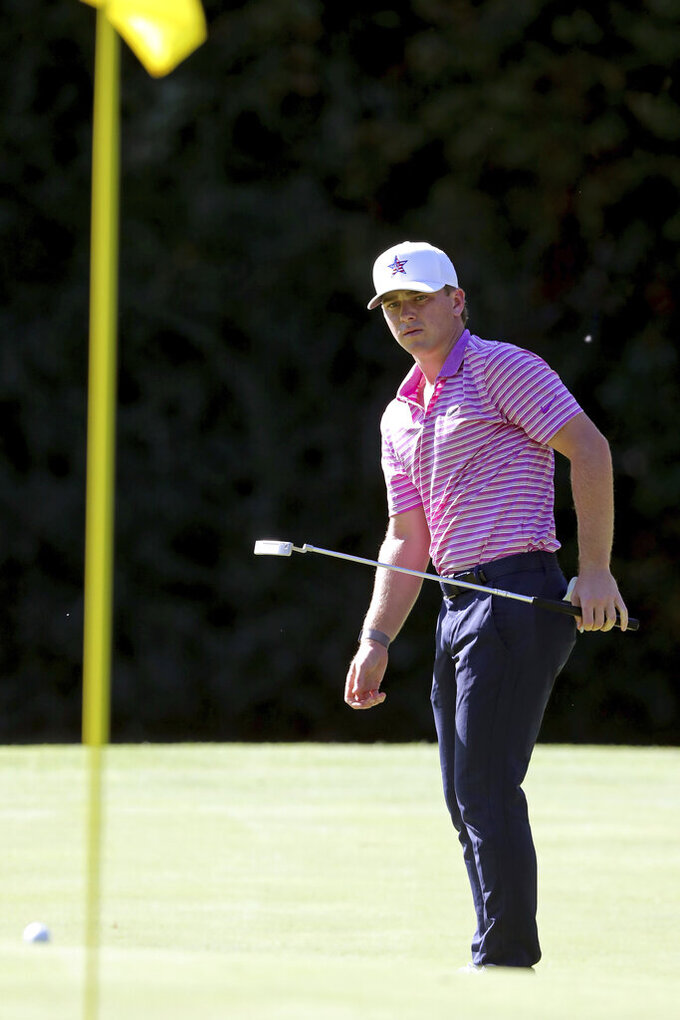 John Augenstein reacts to missing his birdie attempt on the 6th green during the second round of the Masters Friday, Nov. 13, 2020, in Augusta, Ga. (Curtis Compton/Atlanta Journal-Constitution via AP)

So when he arrived at Augusta National on Friday morning, he was ready to get at it.

After the tournament was delayed because of the pandemic and the opening round was halted because of darkness, Augenstein started his day in the middle of Amen Corner and promptly chipped in for an eagle on No. 13.

“It was very exciting to start the way I did,” Augenstein said.

A fifth-year senior at Vanderbilt who earned his Masters invitation as the U.S. Amateur runner-up, Augenstein was the low amateur through 48 hours; Georgia Tech’s Andy Ogletree, who beat Augenstein in the U.S. Amateur, was the only other one of the six in the field in position to make the cut. (Ogletree, who was 1 over through 28 holes and tied for 50th, was one of four amateurs were unable to complete the second round before darkness on Friday.)

Augenstein was on the 12th green when darkness halted play Thursday night; he decided to putt out but missed an 8-footer for birdie. He watched some of the Tennessee Titans game on TV and had a good night’s sleep.

“I didn’t really think too much about golf once I left the course,” he said.

He returned with his eagle on No. 13 to start his Friday, then parred his way in. He made three birdies on his first nine of the second round, but found a greenside bunker on No. 5 for a bogey, then ran into a disaster on No. 7.

After his tee shot flared right, he needed two more tries just to get back into a reasonable position on the fairway. He came up short of the green on his fourth shot, then chipped on and two-putted from about 10 feet for a triple bogey.

“We did a really good job for 33 holes,” he said, adding that his drive on the seventh was “as bad a shot as I’ve ever hit.”

The low amateur at the Masters earns a silver bowl, a tradition that recognizes club co-founder Bobby Jones, a seven-time major champion who is the greatest amateur golfer in history.

No amateur has ever won the Masters.

Ken Venturi came close in 1956. He had the 54-hole lead until closing with an 80, paving the way for Jack Burke Jr.'s victory. Venturi still finished ahead of a field that included Arnold Palmer, Ben Hogan and Sam Snead, and his 66 in the opening round that year remains the low score at the Masters for an amateur.

Nicklaus reminisced this week about staying in the Crow’s Nest, the attic apartment above the clubhouse that is usually shared during Masters week by the amateurs.

Because of social distancing requirements during the coronavirus outbreak, the six amateurs had to take turns staying there this year.

But that’s OK with Augenstein. It’s another tradition that he has his eye on.

“Some of the amateurs that came to play in the Masters are out here playing now,” he said. “That’s where I want to be, hopefully sooner rather than later.”