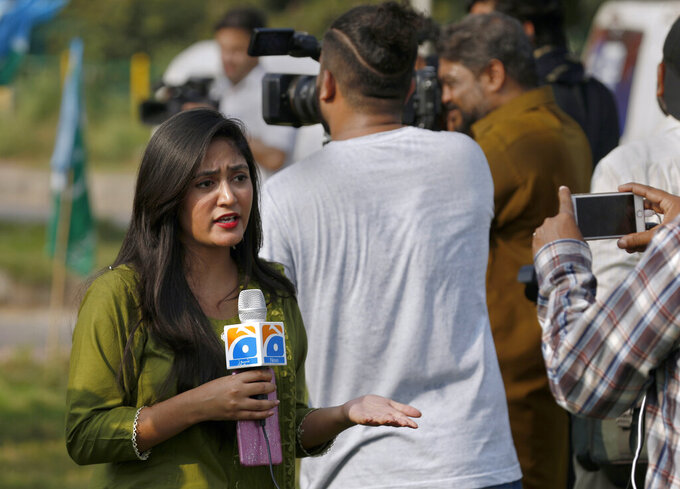 In this Friday, Sept. 11, 2020 photo, Alena Waqar, a female journalist from local tv channel Geo News, gives live reporting during a rally, in Islamabad, Pakistan. Social media attacks against Pakistan's women journalists have been vile and vicious, some threatening rape, others even threatening death and the culprits are most often allied to the ruling party, even prompting the Committee to Protect Journalists to issue a statement on Friday condemning the relentless attacks. (AP Photo/Anjum Naveed)

KABUL, Afghanistan (AP) — The Committee to Protect Journalists on Friday condemned relentless social media attacks on women journalists in Pakistan — vicious assaults that have threatened rape and even death.

The attacks often follow instances of public criticism of the ruling party, led by Prime Minister Imran Khan, a former celebrity cricket player who turned to politics later in life and whose following includes legions of young people.

Criticism had focused on Khan's handling of the coronavirus pandemic. Pakistan has reported over 304,00 cases of the virus, including 6,408 deaths. The numbers have been declining since June, with fewer than 400 new cases reported on most days and as testing has increased.

The New York-based group did not provide evidence of direct links between the perpetrators and Khan's party, the Pakistan Tehreek-e-Insaf, or PTI.

“The target of these attacks are women with differing viewpoints and those whose reports have been critical of the Pakistan Tehreek-e-Insaf’s government, and more specifically its handling of the coronavirus pandemic,” the petition said.

“The online attacks are instigated by government officials and then amplified by a large number of Twitter accounts, which declare their affiliation to the ruling party," it added. “In what is certainly a well-defined and coordinated campaign, personal details of women journalists and analysts have been made public.”

CPJ also said the attacks have “dire offline consequences,” with many female reporters saying they are being forced out of their jobs or feel prevented from fully participating in their profession.

Khan's government and the country's powerful military and its much feared intelligence agency, have been harshly criticized for their heavy-handed approach to its critics in the media. Journalists have been picked up, civil rights activists are in jail, some for months without being charged.

Others, such as rights activist Gulalai Ismail, have been charged with sedition for criticizing the military and forced to flee the country.

Separately, the Coalition for Women in Journalism, a global rights group, this week released an 20-page report on attacks on social media faced by Pakistan's women journalists, saying they come from online “accounts affiliated to the ruling party and conservative, right-wing elements in the country.”

One of the petition signatories, journalist Asma Shamsi who hosts a prime time current affairs show, said the women journalists are not asking for sympathy.

“I need support for freedom of expression in the country,” she said. “I am not a victim. I believe in defiance.”

She said the trolling is an attempt by the government to shut down criticism on social media. “Whenever you criticize PTI, the attacks begin. They are all institution sponsored.”

AP's calls to government and military officials seeking comment were not answered Friday.

However, Human Rights Minister Shireen Mazari tweeted last month that it was “disturbing to learn of women journalists being targeted and abused”.

Abusing women because they are critical is never acceptable, she said at the time. “Journalists do their job & to target them, especially gender-based abusive attacks on women journos, is absolutely unacceptable and disgusting.”