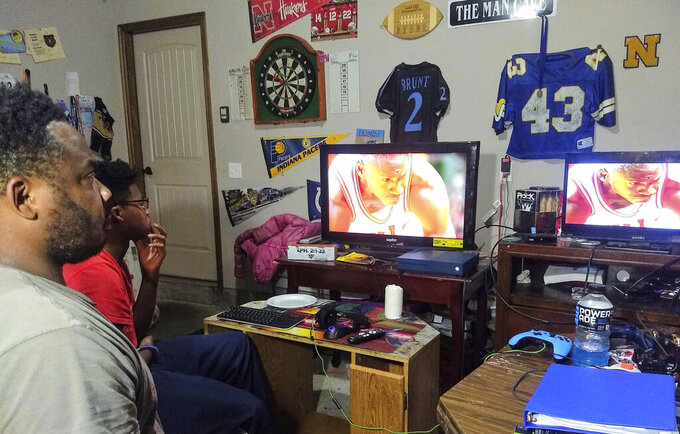 In this Sunday May 17, 2020, photo provided by Christina Mushi-Brunt, AP Sports Writer Cliff Brunt and his 14-year-old son, Elias, watch the final episodes of The Last Dance in Oklahoma City. For the past five weeks, the docuseries that revisited Michael Jordan’s basketball career gave them something to look forward to during the coronavirus pandemic and helped them connect their generations. (Christina Mushi-Brunt via AP)

OKLAHOMA CITY (AP) — Back in the day, I watched Michael Jordan drop 63 on the Boston Celtics on a small black-and-white TV with dials. I was a teenager as Jordan became a global icon. I remember the crazy dunks, the commercials, the baggy shorts and the shoes.

Now, as a pandemic slowed America, I found an unexpected, unforgettable bonding experience emerging in my home. And Michael Jordan was right at the center of it.

“The Last Dance,” a 10-part ESPN docuseries that chronicled Jordan’s basketball career, helped me build a stronger connection with my 14-year-old son, Elias.

Each Sunday for the past month, Elias and I grilled. He handled the hot dogs; I took care of the burgers and brats. Then we watched both episodes, uninterrupted. After that, we watched the shows that talked about what we’d just watched. Then we shared what we hoped would be in the upcoming episodes.

To hear him discuss events from that era with his friends as though they just happened has been music to my ears.

Jordan’s cultural influence has remained strong through his Air Jordan shoes, and now Elias has a better understanding of the man behind them. After watching the series, Elias wants a pair of Jordans just as badly as I did back when the originals came out in 1984.

But he hasn’t been just talking about MJ. He’s been talking about Scottie Pippen, Charles Barkley, Isiah Thomas, Reggie Miller, Larry Bird, Clyde Drexler, Gary Payton and Karl Malone — in some cases as they were trending on Twitter. The series has brought light to a golden era of hoops unlike any other.

And I have learned things about my son. I would never have guessed the person he would relate to most was the eccentric Dennis Rodman. But when Elias helped Highland West Junior High win back-to-back city championships the past two years, he was Rodman-like — a strong rebounder who hustled, defended multiple positions and was mentally and physically tough. It makes perfect sense.

As for Rodman the person? Elias found him entertaining. As pro wrestling fans, we got a kick out of Rodman skipping finals practice to show up with Hulk Hogan on WCW Nitro. As Elias astutely put it, Hogan is one of the only people it would make sense to ditch Michael Jordan for.

Elias understood why Mike was so hard on his teammates. You can't argue with the results, he said. When he plays at Southmoore High School, I imagine he will be the Pippen of his team — the one who uplifts others.

Throughout much of the series, Elias held a ball in his hands. He often would go step-by-step through Jordan’s movements. After all these years, His Airness still makes kids want to pick up a ball at all hours. It’s frustrating that Elias can’t go out right now and try his new moves against his friends.

One gift from the series that wasn’t about Mike: the music. Elias heard L.L. Cool J’s “I’m Bad” and Kool Moe Dee’s “How Ya Like Me Now” and immediately wanted to hear more. He loved OutKast’s “Rosa Parks,” Black Sheep’s “The Choice is Yours” and Naughty By Nature’s “Hip Hop Hooray.” He didn’t just hear the old-school sound. He felt it and was changed.

Sunday’s two shows were the final ones for “The Last Dance.” And for the first time, my son and I felt the loss of something we enjoyed that started after the onset of the pandemic.

A beautiful thing happened after the last episode. Instead of talking about what we wanted to see next, Elias and I talked about saving the time slot and continuing to bond.

Something good has come of this pandemic after all.