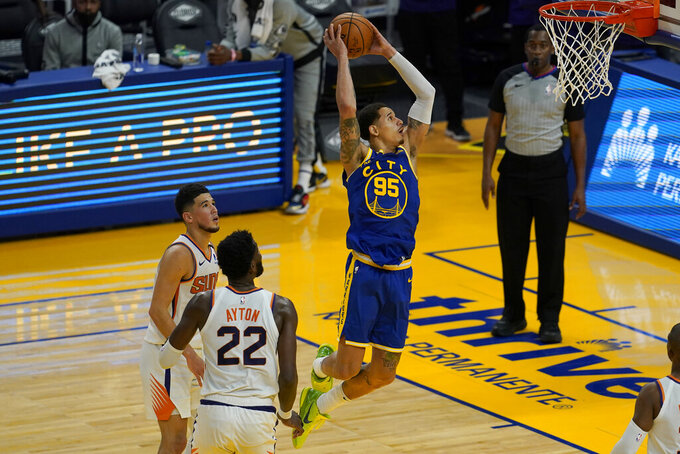 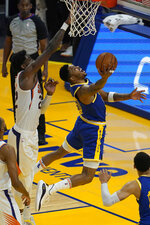 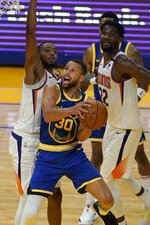 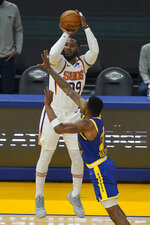 Jordan Poole hit a go-ahead 3-pointer with 1:43 left, Andrew Wiggins scored the next time down and finished with 38 points, rallying the Warriors past the Phoenix Suns 122-116 on Tuesday night.

Draymond Green notched his sixth triple-double of the season and 29th of his career with 11 points, 11 assists and 10 rebounds as the Warriors made it two straight clutch wins during the playoff push.

“It was incredible, a lot of guys stepped up," Green said. “For us to get that win and Steph to struggle shows a lot about the growth of this team. We've got two more games. It's important that we finish those two games strong and try to head into the playoffs rolling.”

Curry made a 9-foot jumper with 45 seconds left while falling to the floor, a bright finish to his 21-point performance on another tough outing for him shooting 3-pointers.

Golden State — competing with just eight healthy players — secured a spot in the play-in tournament with Monday's 119-116 win against the Jazz then held on against a talented Suns team.

“These last two games have been so important for us against the two teams with the best records in the league,” Warriors coach Steve Kerr said. “Tonight felt like a playoff game. Phoenix was very well prepared, they had the day off yesterday, so they came out with a great game plan to take the ball out of Steph's hands."

Devin Booker scored 34 points and knocked down a key 3-pointer with 5:25 left for Phoenix and Paul added 24 points, but the Warriors delivered all the key plays down the stretch.

“It was a tough one, you never want to lose two in a row,” Booker said, later adding, “I'm not concerned at all.”

Poole hit a 3-pointer with 57 seconds left in the third to get Golden State within 93-88 — a night after his successful half-court heave at the third-quarter buzzer against Utah. The Warriors trailed 98-92 Tuesday to begin the fourth and Poole hit another 3.

Golden State needed his hot hand given Curry's struggles from deep for a second straight night.

“The thing that’s bugging me more than anything is we gave up 29 second-chance points to a team that is not known for offensive rebounding the ball,” Suns coach Monty Williams said. “... We did a really good job on Curry but Wiggins had one of those nights.”

Poole scored 20 points to wrap up Golden State’s final set of back-to-backs as the Warriors won their fourth straight at home.

Alex, a therapy bunny that became a social media hit last month attending a Giants baseball game, made it to Chase Center by season's end to cheer on the Warriors.

Owner Kei Kato and her fiancé, Josh Row, had their seats upgraded to the lower bowl as the team made a special exception so the bunny could attend — saying the bunny was their “lucky rabbit's foot” for the playoff push because rabbits aren't typically allowed in the arena.

He received a big screen bunny welcome from the Warriors during a first-quarter timeout.

“Just to give back and make everybody happy makes us happy,” Kato said. “We want to share him with the world.”

Warriors: F Damion Lee did more court work a day after shooting for the first time since contracting COVID-19 despite being vaccinated. Coach Steve Kerr spoke to Lee and “he’ll ramp it up a little bit today.” F Eric Paschall, still sidelined by a strained left hip flexor, played in another three-on-three game as he has been doing in recent days. The hope is he will be ready to return either Friday or in Sunday's regular-season finale against Memphis.

Suns: Host Portland in their final home game Thursday before finishing with back-to-back games at San Antonio on Saturday and Sunday.

Warriors: Host the Pelicans on Friday night having won 13 of the last 15 at home vs. New Orleans.