'We have to figure this out': Heat say turnaround will come 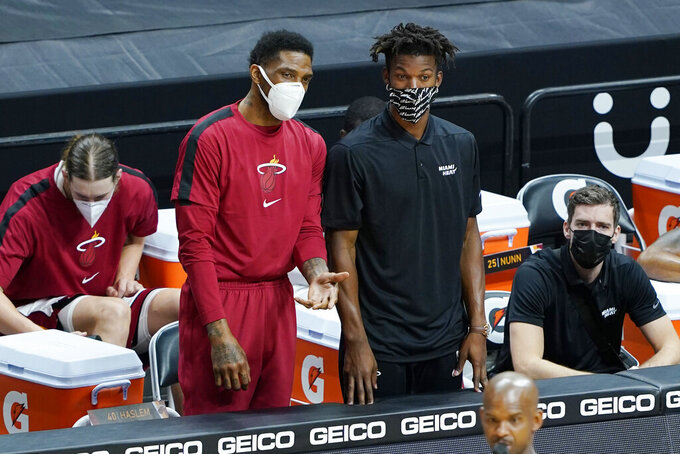 Miami Heat players Udonis Haslem, left, talks to Jimmy Butler during the first half of an NBA basketball game against the Denver Nuggets, Wednesday, Jan. 27, 2021, in Miami. Butler has missed multiple games because of the NBA's health and safety protocols(AP Photo/Marta Lavandier)

MIAMI (AP) — As if losing the NBA Finals isn’t bad enough, there now seems to be a curse that stretches into the following season.

The Miami Heat aren’t believing that quite yet — even after a disastrous start to the 2020-21 campaign.

The reigning Eastern Conference champions are 6-12, matching the franchise’s worst 18-game start since opening 4-14 in 2007-08. The roster has been decimated by injuries and virus-related issues, and the current losing streak reached five games after a 108-104 loss to the Los Angeles Clippers in a game where Miami led by 18 points early but wound up trailing by as many as 19.

The next chance to get things right comes Saturday when Miami hosts Sacramento.

The year after losing the finals has not been kind to the most recent teams who have dropped the title series. Cleveland lost the finals in 2018, LeBron James left to join the Los Angeles Lakers and the Cavaliers haven’t been close to the same since. Golden State lost the finals in 2019, saw most of the roster get hurt, watched Kevin Durant leave for Brooklyn and finished last season with the NBA’s worst record.

It’s not that bad for the Heat. Bad enough, though.

Jimmy Butler has missed 12 of Miami’s 18 games, mostly because of the league’s health and safety protocols established for safe play during the coronavirus pandemic. Avery Bradley, brought in as a free agent, has missed 10 games, and most of that is because of virus-related issues. Tyler Herro missed seven games with neck spasms. Meyers Leonard, a key performer last season, has appeared in only three games this season and is now out with a shoulder injury.

The Heat have used 13 starting lineups, are 0-10 when shooting less than 48%, set an NBA record on Wednesday by missing 15 3-point tries in the first quarter and are shooting 29% from beyond the arc in this five-game losing streak.

“You can’t make an excuse for it,” Heat coach Erik Spoelstra said. “You just have to continue to grind, to learn, to compete for each other, get better. There are certain points where we are and we just need to be more consistent with it. We will be getting guys back soon enough.”

Miami’s seven most experienced players, in terms of years in the NBA, were all unavailable Thursday.

This was the lineup the Heat started the fourth quarter with against the Clippers: Gabe Vincent and Max Strus, who are on two-way contracts; Precious Achiuwa, who is a rookie; KZ Okpala, a second-year pro who played in five games last season; and Herro, a second-year guard who hadn’t played in two weeks.

“A lot of dudes that are playing right now are the young guys, including me,” Adebayo said.

Help is on the way. The Heat hope Butler can play Saturday. Dragic isn’t expected to be out for long. Herro, in his return game Thursday, had a big fourth quarter to lead a comeback attempt.

He insists the turnaround is coming.

“No one’s sorry for us,” Herro said. “There’s no excuses. We’re just going to continue to get better and hopefully one day we can get everybody back and show everybody what we’re made of.”