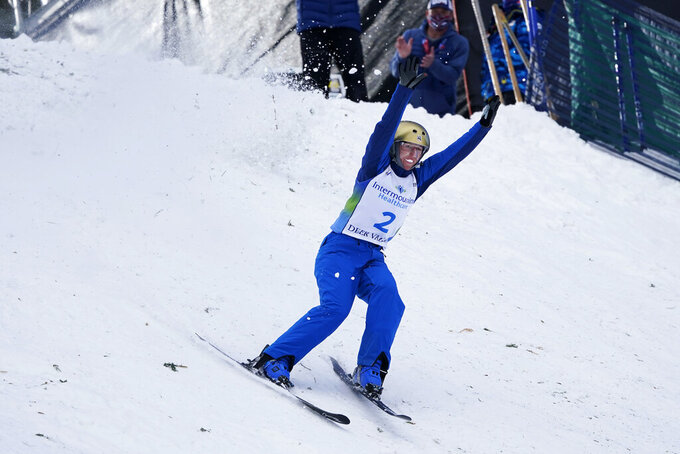 ZHANGJIAKOU, China (AP) — Her mom and dad wanted a name that stood out. A strong name.

Since the aerials skier was born in December, and since her parents loved the way the snow sparkled on northern Michigan mornings, “Winter” felt like the perfect name to give their baby girl when she was born in 1998.

Now Winter Vinecki is set to become the first athlete with the first name Winter to compete at the Winter Games.

Just another in a long line of notable accomplishments for the 23-year-old who hunts and fishes, grows her own vegetables, launched her own foundation (dedicated to her late father), has run a marathon on all seven continents and, oh yeah, just so happens to fly high over the snow.

“I really don’t take any day for granted,” said Vinecki, who begins Olympic qualifying Sunday on the heels of her U.S. teammates capturing gold in the debut of the mixed team aerials event. “I really just want to take every opportunity that I can and enjoy it.”

That’s a message instilled by her father, Michael, who died at age 40 of prostate cancer. Vinecki was 10.

Even at a young age, the loss reinforced one thing: Embrace life to the fullest.

Before she reached 15, she had run marathons on all seven continents. Her mom, Dr. Dawn Estelle, joined her on the trek that took them from Oregon to Antarctica, with stops in Kenya, Peru, Mongolia and New Zealand before a big finish in Greece.

She also started a foundation, Team Winter, to raise awareness of prostate cancer in honor of her father. Through that work, she was invited to the Billie Jean King Salute to Women in Sports gala in 2011. There, golf icon Annika Sorenstam presented Vinecki with the Annika Inspiration Award.

Around that time, Vinecki also happened to cross paths with Olympian Emily Cook, who suggested, given her athletic background, that Vinecki give aerials a whirl.

Intrigued, Vinecki accepted an invitation to train with Cook in Park City, Utah.

“I did my first flips into the pool,” recalled Vinecki, who grew up skiing at Boyne Mountain in Michigan, where her grandfather serves as a ski instructor. “I fell in love with it after that first week.”

Now, she’s doing triple-twisting, double-backflips on the course. She knows this — dad would've been proud.

“Doing all these flips and stuff? I don’t think he would ever imagine I’d be doing that, but I think he’d think it’s so cool,” Vinecki said.

The rest of her family certainly thinks it is. Her mom, Estelle, says she and her brothers are “inseparable.”

“Tragedy and only having one parent-figure made them depend on one another and trust in one another,” Estelle, who’s an obstetrician and gynecologist, wrote in an email. “Out of that grew deep love, respect and gratitude for each other.”

Her brothers have strong names, too — Yukon, 24, after the potatoes since Estelle’s parents own a farm that’s been in the family for more than 100 years; Magnum, 21, after the tractor series; and Ruger, 19, after the rifle (they’re big hunters).

As for Winter, she would’ve been Winter even if born in, say, May, because “winter was Michael and my favorite season,” Estelle wrote.

While there's a Canadian bobsledder named Christopher Spring and an American luger called Summer Britcher competing in China, there had never been an athlete with the first name Winter at the Winter Games, according to Olympics historian Bill Mallon.

Vinecki is trying for another distinction in Beijing: becoming the first American woman to take home an Olympic gold medal in the aerials individual event since Nikki Stone’s gold in 1998. (Ashley Caldwell earned gold in the mixed team event Thursday.) The final is Monday.

Any season is ideal for Vinecki's other passion — the great outdoors. She hikes with her family, hunts (“the meat that I do eat, I make sure most of it is all stuff that I got myself,” she explained) and likes to cast a line into the water (she went fishing a little while ago for halibut, salmon and rock fish in Alaska). She grows lettuce, kale and herbs in her aeroponic gardening system set up between her living room and kitchen in Park City.

It's there, at her place, that mom, brothers, friends and family will gather for a watch party.

Vinecki will be jumping for them — and for others who have gone through what her family has. “Never give in,” is her mantra — a world view her dad helped instill.

“His happy, always fun attitude,” Vinecki said, "has really stuck with me.”